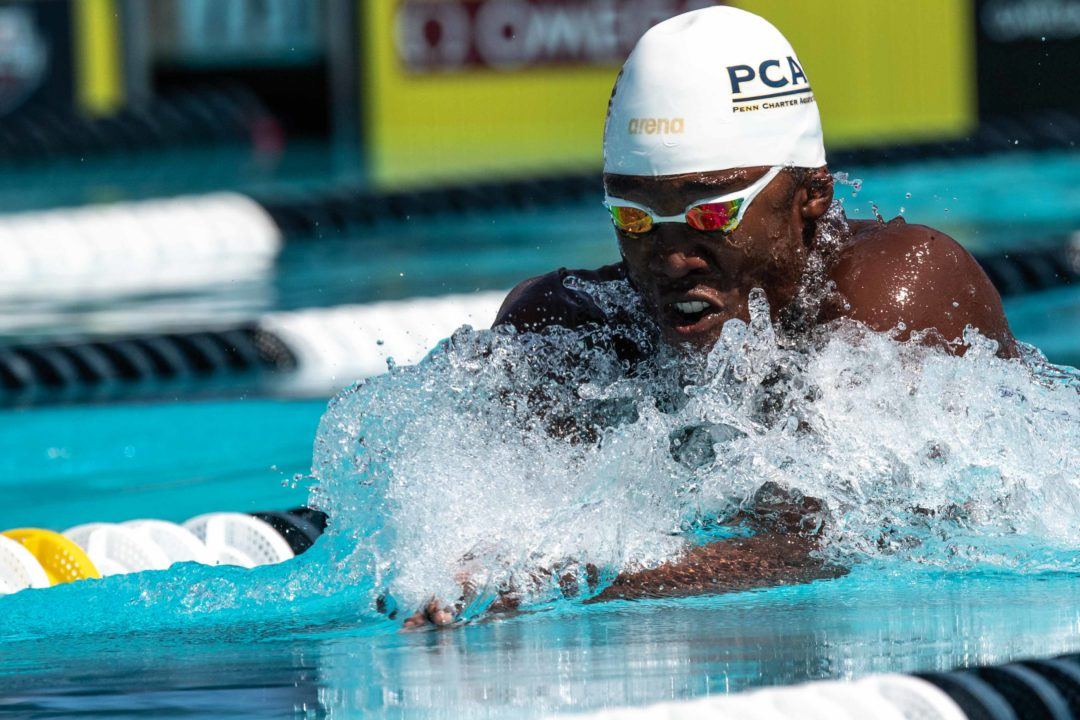 Cal's class is very small, but it does feature the #1 swimmer in the class: one Reece Whitley. Archive photo via Tim Binning/TheSwimPictures.com

We’re continuing on with our rankings of the top recruiting classes in the men’s NCAA- these swimmers will be starting their freshman seasons in the next month.

Here are the 8th-through-5th-ranked Men’s NCAA Swimming & Diving classes, with the top 8 to follow later this week:

It’s a very small class for the returning NCAA runners-up, but there’s an argument they could be ranked even higher for nabbing the #1 recruit in the class. Reece Whitley has a chance to be one of the greatest breaststrokers in NCAA history, coming in with the fastest breaststroke times of any high schooler we’ve ever ranked. 51.1 and 1:51.4 would have both placed top-3 at NCAAs last year, and Whitley could be both a multi-time NCAA champ and a major difference-maker on the breaststroke leg of medley relays. Far from a one-stroke specialist, Whitley is also the best 200 IMer in the class (1:43.55) and there are some who suspect Whitley could ultimately develop more into an IM type than a true breaststroker. (It’s too easy to forget he’s 3:44.7 in the 400 IM and has the ability and training background to chew up yardage in those tough races).

The rest of the class has upside based on Cal’s track records in their events. Millis is a backstroker (48.2/1:45.2) who has a ways to go, but does join a program that churned out Jacob Pebley, then Ryan Murphy, then Daniel Carr and Bryce Mefford. O’Connell’s 47.7 100 fly is intriguing, especially given he’s only been swimming year-round for a handful of seasons. He was just 51.7 in the spring of 2016, 49.9 a year later and 47.7 this spring, so the trajectory is awfully exciting. Penvenne is a pretty good three-distance freestyler (20.5/44.8/1:38.2) who could develop into a relay piece down the line.

Virginia Tech gets a boost from a massive transfer: SEC champion Hugo Gonzalez. The second-fastest 400 IMer in college swimming last year, Gonzalez had a rough NCAA meet and wound up far underperforming his potential. But with a year of experience under his belt (and perhaps the ability to save a taper through ACCs), Gonzalez could be one of the single highest scorers at NCAAs. A 3:35.7/1:40.6 IMer, Gonzalez can also go 1:39.0 in the 200 back, 46.2 in the 100 back, 1:34.7 in the 200 free and even 1:53.9 in the 200 breast. He’s a huge addition not only to the individual H2Okie lineup, but to relays, where he adds his solid 200 free and split 42.8 in the 100 free last year.

Gonzalez has three years left, so his value isn’t even as handicapped as most upperclassmen transfers are. Virginia Tech supplements him with one of the recruiting class’s best IM prospects: home-grown product Keith Myburgh, who is 1:46.6 and 3:45.8 in the IM events. Myburgh can also fill in some breaststroke (he’s been 54.4 and 1:58) and is a good 200 fly/back swimmer as well. Virginia Tech didn’t even qualify medley relays for NCAAs last year, but with Gonzalez and perhaps Myburgh building the front half, VT could be looking at huge medley improvements.

And in addition to the Gonzalez transfer, new head coach Sergio Lopez also got a high-level international recruit following him from his previous post at Auburn. Antani Ivanov is a World Junior Championships bronze medalist and Short Course World Championships team member for Bulgaria. Originally an Auburn commit, Ivanov will now join Virginia Tech, bringing a long course 200 fly time (1:55.55) that is faster than anyone in this domestic recruiting class has ever been. Ivanov has also been 52.6 in the long course 100 fly and has relay split as fast as 51.8. There’s certainly a potential timeline where Virginia Tech entirely rebuilds its medley relays with Gonzalez, Myburgh and Ivanov with massive success.

Blake Manoff is a pretty good two-distance flyer (48.1/1:45.7) who could also be in the mix for that relay spot, depending on Ivanov’s performance in short course yards.

This is a big recruiting class that also includes a handful of transfers to bolster depth. Claesson (20.4/44.8/1:37.8 free freshman) and Rich (20.4/44.2/1:38.1 free transfer) load up the sprints. Doss (15:28 freshman miler) and Apisa (15:24 transfer) add to the distance group. When you count new head coach Lopez among the additions, this should be a new-look H2Okie team that well outperforms last year’s crew.

USC has some serious outgoing talent, but they reloaded with one of the class’s best prospects in third-ranked Alexei Sancov. A Moldovan Olympian in 2016, Sancov was a standout at U.S. Junior Nationals this past summer and could be a three-event NCAA scorer as a college rookie. His 200 free (1:32.80) is a hair away from the best time in a loaded class in that event, and his 500 free (4:14.25) is also in NCAA scoring range. A 42.68 100 free will go a long ways in refueling some of the relays USC has holes in. Sancov is also a 47/1:44 flyer and a 1:45 IMer, so his lineup impact isn’t just limited to freestyle.

There’s also an argument to be made that Sancov is better in long course (49.0/1:47.0 in freestyle, 53.2 in fly), and that gives him a real shot to ultimately outperform the #2 recruit, who swims very similar events and currently has a slight edge in short course yards, though not in meters.

The Trojans also picked up an impact transfer: Nikola Miljenic, who was 19.4/43.2 in free and 46.4 in fly for Indiana last year. He fits into a very similar free/fly mold to Santo Condorelli and Dylan Carter, both gone to graduation.

The other big gets in the class are an international distance standout and a versatile sprinter from Florida. Victor Johansson brings big-league talent from Sweden, with a long course 1500 (15:03) and 400 (3:47.33) that project to be NCAA scoring times if they translate well to yards. He also swims down to 1:48 (long course) in the 200 free, and could be a relay factor in the 4×200. Ariel Spektor is the latest standout from the Bolles program in Florida, and could develop in any number of events. His 1:46.5 IM is probably his most intriguing event at this point, but a 47.3 fly is awfully good as well. Spektor is 44.5 in the 100 free, which should suggest some level of relay value, too.

This is a massive class that includes no less than six transfers and three of our top 20 prospects. It’s also a fast-rising class: when we did our original recruit ranks in the summer of 2017, only one of these prospects made our top 20, but two more joined the list on big senior campaigns.

The big three prospects are all butterfly/backstroke types, and in fact, ASU got the best 100 flyer and 100 backstroker in the entire recruiting class. #7 Cody Bybee is the best 100 flyer in the class with a 46.50. He’s also a stellar freestyler (43.7/1:34.0), which gives him massive relay value, even as a freshman. For a team that graduated its best flyer (Andrew Porter), Bybee was the absolute top target they could nab.

With fly and back sewn up with blue-chip prospects, coach Bob Bowman went hard after sprint freestylers and breaststrokers with the rest of his class. In total, this recruiting class has nine swimmers with 100 free bests at 44.9 or better, five swimmers with 50 free bests at 20.3 or better and six swimmers with 200 free bests at 1:36.6 or better. The free relays, only one of which scored at NCAAs last year, are in for a serious talent upgrade. Even if it takes a year or two for the class to come together, ASU should have some major relay prowess building as this class moves through the ranks.

The breaststroke corps adds a lot of 100 speed, with the certainty that they’ll have their 200-yard mettle tested in Bowman’s grueling training program. Again, Indiana transfer Jack Kucharczyk (54.4/1:56.2) is the most accomplished and well-rounded at this point. But true freshman Warren and Buffalo transfer Otto have both been 54-mid, though neither has yet broken two minutes in the 200.

Did someone call me?

Gotta be Texas, Stanford, Florida and – thanks partly to Zach Apple transfer – Indiana.

I am saying this before I look at the 1-4 rankings, I promise!

That Florida class at first to me looked not as great, but I think that was just because of what they are replacing. On an absolute basis they’re awesome. I think Stanford’s class is exactly what they need to get to the next level, but Indiana’s is better just because of the certainty of Apple’s 3 scoring swims and relay anchors. Levant and Roy are awesome, but Levant’s events are pretty stacked and Roy is still more or less a one trick pony.

Now let’s see if I was right or not 😛

You forgot Galen Penvenne at Cal

Thank you for adding Galen in there!

Cal hadn’t posted their freshman roster yet, so we could only include the prospects we knew had verballed there. Once I could confirm his commitment, I added his times!