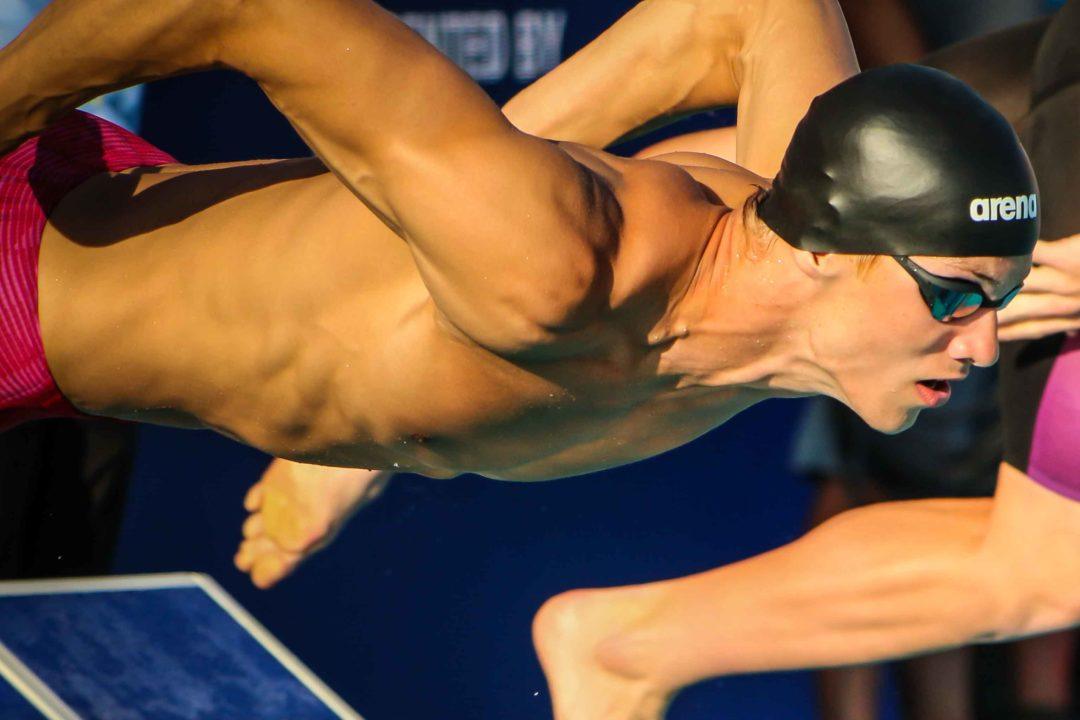 We’re wrapping up our rankings of the top recruiting classes in the men’s NCAA- these swimmers will be starting their freshman seasons in the next month. Stay tuned for women’s class rankings coming soon.

Here are the top 4 incoming freshmen classes in this year’s NCAA:

Easily the biggest transfer in the NCAA this season (and arguably the biggest transfer we’ve ever seen), Zach Apple is a one-man wrecking crew of NCAA points. Last year for Auburn, he was 3rd nationally in the 200 free, 5th in the 50 and 9th in the 100, though his winning time from the B final in that 100 would have been 3rd overall in the A heat. His lifetime-bests return as the 2nd-fastest 50 freestyler (18.82), 3rd-fastest 100 freestyler (41.36) and 3rd-fastest 200 freestyler (1:31.18) in the nation. Add to that his extraordinary relay value and how he meets IU’s specific position of need after the graduation of Blake Pieroni, and you’ve got the absolute best pickup the team could have gotten.

IU also did very well with freshman recruiting. Michael Brinegar is the best miler in the class (14:35.35) and based on his long course and open water accomplishments, is a much better swimmer than his recruiting rank suggests. He’s also 8:47 in the 1000 and 4:19 in the 500 free, and should be an instant NCAA scorer in the mile at the very least.

The Hoosiers did an excellent job of in-state recruiting. Jack Franzman was just outside our top 20 recruits, and has terrific relay value with his 19.7/43.4 sprint speed. He’s also rangy enough to go 1:37 in the 200, and that time could very well develop in a big way at Indiana. Other Indiana-based products include 1:48/3:51 IMer Gabhart, 20.4 sprinter Couchon, 48.5 flyer Cook and the divers VanDevender and Brown, who join a diving group that has been incredibly elite.

Mikey Calvillo fits into the Brinegar mold of a distance swimmer who has flashed a lot more in long course meters. He was a Junior Pan Pacs team member for the United States and brings in short course times of 15:05 in the mile and 3:50 in the 400 IM. He’s joined by Junior Pan Pacs team member Van Mathias out of Oregon, who is also better in long course meters but is also 47.9/1:46.3 in short course fly.

Zane Backes follows the footsteps of Olympian Cody Miller as a Nevada breaststroker heading east to Indiana. Backes (53.1/1:55.0) is actually quite a bit faster than Miller was (54.3/1:56.4) as a high school senior, which has to be awfully exciting for a breaststroke group that already includes NCAA champ Ian Finnerty. Backes doesn’t yet appear on the IU roster; but will join the program in January, the school says.

Indiana made a surprise run at the NCAA team title with a small scoring roster last year. The graduation of Pieroni hurts, but with this good (and deep) of a recruiting class joining the program, IU could have a more rounded attack this season – a scary thought for the top team contenders.

This is a really, really good class, and one that has a lot of rising potential on the national and international stage. In our 2017 recruit rankings, we had Jack LeVant at #11, but even then, it didn’t feel right. The Texas-based swimmer can do basically everything – the question has always been where he projects best. This past summer may have made some headway in that question: the 18-year-old LeVant took 5th at U.S. Nationals in the 200 meter freestyle with a 1:46.46, and was also 1:55.89 in the 200-meter fly.

Stanford also got two guys just outside our top recruit ranks. Jonathan Cook was originally an honorable mention in our first ranks, though he got crowded out in our re-rank. He’s 53.9/1:57.0 in breaststroke, a very solid prospect. David Madej is a 47.4/1:46.0 flyer with a 44.0 100 freestyle to boot.

The Cardinal also adds two divers who look high-impact: Noah Vigran and Conor Casey were finalists at Senior Nationals and state champs in their home states of Ohio and Virginia, respectively. The rest of the class includes Alessandro Boratto, who is 48.0 and 1:46.4 in the backstrokes, and Will Roberts, a local pickup who can do a little bit of everything: he’s 1:47.9 in the 200 IM, 49 in both fly and back and 57 in the 100 breast.

If you thought classes #5-8 looked good, now you’re getting a glimpse at just how loaded the top 4 classes are. This Florida group is outstanding, both in American and international pickups.

Trey Freeman is an absurdly rangy freestyle talent out of Tennessee. He’s got an NCAA scoring time in the 200 free (1:33.06) plus an NCAA invite time in the 500 (4:15.06). But what’s truly impressive is that he can swim up to a sub-15-minute mile (14:59.33) while also coming down to 43.8/20.1 speed in the sprints. Even if Freeman becomes more of a distance swimmer in Florida’s system, he could also contribute on multiple free relays the same way someone like Cristian Quintero did in years past.

Freeman is bolstered in a new-look freestyle group by Robert Finke, Will Davis and Isaac Davis.Finke has represented Team USA at Worlds and is among the best distance men in the recruiting class as a whole. He’s got the fastest 1000 (8:45.50) and a mile time (14:37.49) that would have been 5th at NCAAs last year. Finke can also go 3:44.0 in the 400 IM, which fits very well with Florida’s historic strengths. The Davis brothers hold down the sprinting end, following in the footsteps of Florida high school standout Caeleb Dressel. Will Davis is 19.7 and 43.9 in sprint free, plus 47.6 in sprint fly, while Isaac is a tick faster in fly (47.5) and a tick behind in free (19.9, 44.4).

Always dominant in international recruiting, Florida nabbed Poland’s Kacper Stokowski, who has been 53.8 in a long course 100-meter backstroke as well as 1:48.5 in a 200 meter free. The added bonus with Stokowski is that he’s arguably been better in short course meters, which suggests his walls and underwaters are good enough to convert his speed well into the NCAA’s yards format.

This Texas class is absolutely loaded, particularly in the freestyles. They got the premier relay-distance freestyler of the class in Drew Kibler, a prospect who perfectly fits the events where Texas has had so much success. Kibler is a 1:32.6 200 freestyler, good enough to make last year’s NCAA final. He’s also got a scoring time in the 500 free (4:14.42) as well as an elite 100 (42.90) and the class’s best 50 free (19.38). If that’s not enough, Kibler is 46.8 in butterfly and 47.0 in backstroke, plus brings the class’s best 200 back at 1:42.34. There’s a real argument to be made that Kibler, not Reece Whitley, is the best prospect in this class. Kibler will certainly have early opportunities for impact, with a real shot at all three free relays as a rookie.

Both Matthew Willenbring and Jason Park both come right out of Texas and are among the best in the class in their events. Willenbring is a 1:44.1 IMer with a massive frame that also allows him to go 19.9, 43.2 and 1:35.2 in freestyle. He was previously a medalist at the World Junior Championships in 2017, though he later tested positive for a banned substance and had to return the medals. Park is within a nose of the best 100 back in the class (he’s 47.0) with a 1:43.1 200 to back it up. He’s also 46.9 in fly, which is maybe even a better event for him.

Andrew Koustik is another great recruiting value. He didn’t quite fit in our top 20 list, but a class-best 1:43.69 in the 200 fly is outstanding for a program that recently finished training two of the best 200 flyers of all-time in Joe Schooling and Jack Conger. If that’s not enough, Texas pulled a big-name transfer is Jake Sannem, a former top-20 recruit who just finished his freshman year at USC. Sannem is a 1:34.7 200 freestyler and a 4:19 in the 500, plus 44.0 in the 100.

With another great class coming in will Texas be able to keep their streak alive another year? It was a close meet last year and losing Schooling, Roberts, and Ringgold will likely hurt. Cal and Indiana will both probably be right there with them again as both have great returning teams and great incoming classes. It should be a really fun year. I’d love to see Eddie lead them to 5 championships in a row. Even though it’s relatively arbitrary it’d be cool to see him join Doc Councilman and David Marsh as the only coaches to do so

I really hope a team beats Texas this year and ends the “Texas era” that we have in the NCAA right now. Personally I’d love to see a Stanford, NC State or a school like them take the top spot.

Shattering dreams on a Friday is perhaps a bit difficult, but NO!
the Longhorns will be taking number FIVE this season!

40 year long “eras” take a little more than a year to break.

It’s a home meet this year, to boot. Being a Texas fan I’m biased, but everyone else needs to get their licks in now. This is the year. I think Texas loses a close meet.

Diving will be the difference once again.

Not as replaceable in practice

Diving will save swimming again this year.

Imagine a football commentator saying “defense will save offense this year” and everyone acts like it’s profound.

It’s not quite the same because offense and defense are distinct parts of one sport. I do think it’s a ridiculous argument as swimming and diving have always been grouped together at NCAA and most high school levels, but swimming and diving take completely different physical and mental preparation. The only similarity is that both involve water; diving is more akin to gymnastics. Even then at the NCAA level each team can only bring a limited amount of athletes to championship meets, so saying one part of the team won the meet is flawed logic

Not an IU fan, but that class is loaded with kids ready to make leaps in their careers and explode onto the National/International scene. By Senior yr look for them to definitely move up this list.

How do I get shot down immediately, but this guy get upvoted for saying IU is loaded?

You know who I am