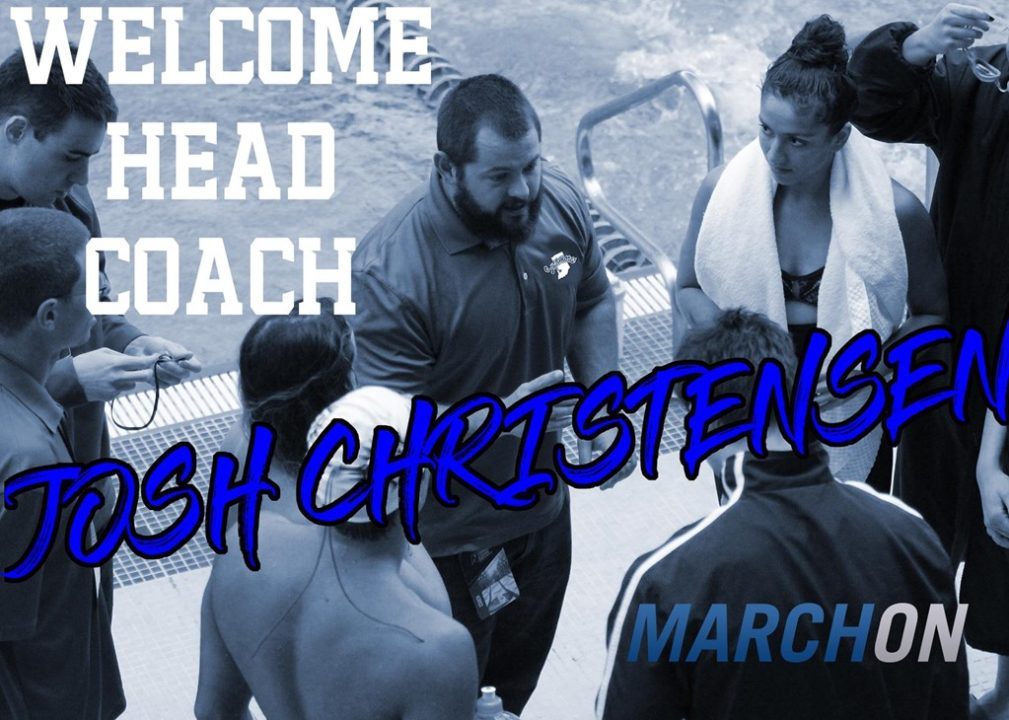 Christensen takes the job after Patrick Rowan first accepted, then changed his mind, about it 9 days ago. Current photo via Indiana State Athletics

It’s another week, and another new head coach for the Indiana State women’s swimming & diving team. Nine days after Patrick Rowan announced that he had changed his mind about taking over the program and would remain at Nebraska as an assistant after all, Indiana State announced Josh Christensen as the team’s new head coach. The position first opened in July, when Matt Leach was announced as the new women’s swimming head coach at Washington State.

The program was also the home of U.S. Paralympian Robert Griswold last season, including 3 American Record-breaking in the S8 category while swimming at the Pacific Collegiate Swim Conference Championships.

Indiana State, which launched its women’s swimming program in 2015, finished last season with a 13-6 dual meet record and finished 4th out of 8 teams. Leach was named the Missouri Valley Conference Coach of the Year for their efforts.

“I would like to thank President Curtis and Athletic Director Sherard Clinkscales for entrusting me with this incredible opportunity to lead the Women’s Swimming & Diving program at Indiana State University,” new head coach Josh Christensen said. “The opportunity to lead a program that is only two years old, yet already has so much positive momentum, is truly unique. On our visit to campus, my wife and I were impressed by the professionalism of the athletic department, the great people in Terre Haute, and the vision for the future of Sycamore Swimming and Diving. The resources and people are in place to build a championship program that Terre Haute and the state of Indiana can be proud of.

“Along with our excitement about the future of the program, this move brings our young family close to my wife’s family. My wife is from Kokomo (130 miles from Terra Haute) and swimming in the state of Indiana was a huge part of her life growing up. We understand the swimming and diving tradition in the state and we’re so excited to embrace that and be part of its future,” Christensen said.

Agreed! Josh will do great things there.