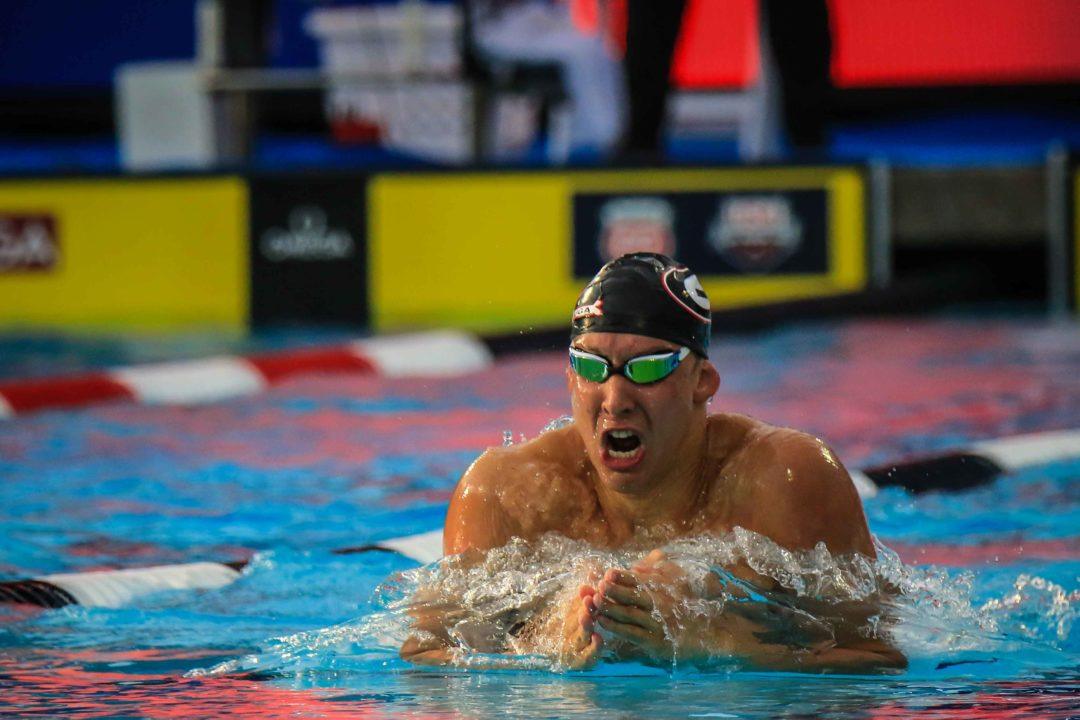 Kalisz proved that even without going best times, he can visibly separate himself from the rest of the world's IMer in a way his predecessors in the American IM group (Michael Phelps and Ryan Lochte) have done for the past decade. Archive photo via Jack Spitser

By and large, the 2018 edition of the Pan Pacific Championships wasn’t a banner meet for the United States. But for Chase Kalisz, it was a resounding success.

It’s been discussed plenty: what went wrong for Team USA. Jet lag, a short turnaround between Nationals and Pan Pacs, a lower-priority summer – whatever it was, the American team didn’t appear at its best in Tokyo. But Kalisz managed to swim at or near his lifetime-bests while maintaining a huge gap between himself and the rest of the world in the IM races.

Generally better-known as a 400 IMer, Kalisz has improved his 200 to dominant status. He went a lifetime-best 1:55.40 at Pan Pacs, blowing out the field by almost a full second. That’s a tenth faster than he went in winning the World Championships gold last summer and more than three full seconds faster than his lifetime-best in this event prior to 2017. Even better, the Pan Pacs silver medalist (Australia’s Mitch Larkin) is also the second in the world ranks, eight tenths behind Kalisz. And Kalisz also beat Kosuke Hagino – silver medalist in this event at 2017 Worlds and the 2016 Olympics – head-to-head at Pan Pacs by 1.2 seconds.

Kalisz proved that even without going best times, he can visibly separate himself from the rest of the world’s IMer in a way his predecessors in the American IM group (Michael Phelps and Ryan Lochte) have done for the past decade.

The best part is that Chase will receive a $100,000 check from Ultra Swim for being their “Swimmer of the Month.” This will help defray some of his training expenses. Congrats Chase!

Just to be clear, no one is giving out $100,000 to a swimmer every month. There’s no cash prize associated with Swimmer of the Month or any of our montly/weekly spotlights. It’s a bit of a running joke that’s sprung up in response to fans who are upset about who was/wasn’t featured.

FWIW: what award will Ultra Swim be giving to the US coaches who put together the men’s 4×100 free relay at PanPacs?

Either Mizuno or MP would be very interesting. The first big American athlete in either

thats all u got from the article ? jeez , well done mate

The whole notion that Team USA overall did poorly at Pan Pacs should really be put to bed. The team won 20 gold medals and 45 medals overall. The next closest team was Australia with 8 gold and 29 medals. A couple of U.S. swimmers had bad meets. But there were a lot of swimmers who put in solid gold medal performances and could have been recognized as swimmer of the month.

The New England Patriots could beat a local high school football team by 100 and still perform poorly. The U.S. obviously dominated the medal table (as was widely expected based on their roster), but by-and-large had a meet that was well below its typical standards for the Operation Gold meet of the season.

Putting aside the somewhat expected stellar swims of Kalisz (2 indiv gold), Murphy (2 indiv gold), and Ledecky (3 indiv gold) and perhaps the unexpected disappointments of Dressel, Manuel and Schmitt, wouldn’t you have been happy if you were told at the beginning of the season that Haas, Grothe, Wilimovsky, M. Andrew, Flickinger, Baker, Sumrall, King and Anderson would all win individual gold medals at Pan Pacs and that the team would win 20 gold medals overall versus 16 in 2014? There was only one returning individual gold medalist (Ledecky) on Team USA from the 2014 Pan Pacs squad going into the meet.

First of all, that is a really poor analogy and one that manages to insult both Team USA swimmers and their competition. Second, what exactly are the “typical standards” for the Operation Gold meet of the season? If any “standards” were not met, they were probably the standards of proper scheduling of Trials in relation to Pan Pacs, training and travel logistics, and administrative and coaching measures which fall to USA Swimming officials and not the swimmers.

Shout out to Ryan Murphy, Gold sweep in the Backstroke events