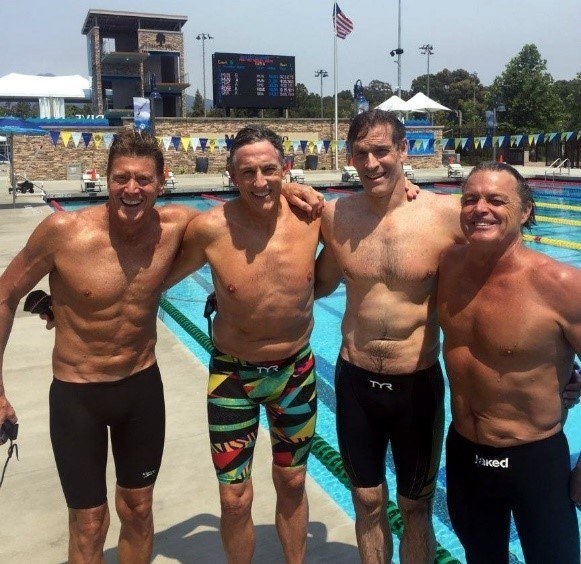 “We thought we had a pretty good shot at those two records,” said Petersen, “but we knew the 400-meter medley relay mark would be a real challenge.” A team from North Carolina had just lowered the medley relay record by 4 seconds earlier in the summer, meaning that the team would have to average a full second faster on each leg than they had originally planned.

Craig Petersen, Michael Mann, Kirk Anderson, Greg Scott
The medley relay consists of 100 meters each of backstroke, breaststroke, butterfly, and freestyle. “Nobody wanted to do the fly,” said Petersen, “so it basically came down to a process of elimination.” Anderson specializes in freestyle, Scott breaststroke, and Petersen in backstroke…so Mann, who is strong in all four strokes, drew the short straw. “I hadn’t raced a long-course 100 fly in a long time, so I was nervous about the back half,” Mann said. After his teammates saw him take out the first 50 of fly in 32 seconds flat, they worried that he’d pay dearly for such a blistering pace. “We could see him tighten up and thought ‘Oh no!’, but he held his form and finished with an impressive 1:10.18, which would have placed 2nd in his age group in the open 100 butterfly competition. Thanks to similar efforts from each teammate, they ended up breaking the NC team’s record by an additional four and a half seconds (4:32.15).

What makes this team unusual is that they’re longtime friends who all live within a few miles of each other, and regularly work out together. It’s not uncommon for people to make a world record attempt by assembling a “dream team” of elite swimmers from across the country. But the CMS crew connected with each other through natural causes. “I met Craig in the late 70s,” Scott said, “when he came with the Princeton team to swim against my team at Alabama.” And when Petersen moved to Colorado in 1986, his first local swim meet happened to be the Skip Mann Championships, which was named in honor of Michael’s father, who was also an accomplished swimmer. A year later, Mann and Petersen found themselves living next door to each other. They took notice of Anderson when he was breaking records in the late 90s, and eventually the entire group got used to seeing each other at a variety of swimming events.

In 2015, they all swam on the same relay for the first time, and set 3 national short course records that still stand today. After that, they looked at other records and realized that their ages would line up for a good shot at three world records in the summer of 2018.

“We’ve each won national championships as individuals before,” Petersen noted, “but we were really nervous for the relays because we didn’t want to let each other down.”

Noting that “you can’t win if you’re disqualified,” Mann described their relays starts as extremely cautious. “We probably could have shaken hands in the time it took between the touch and the launch,” he joked. Such caution did ensure that each start was deemed legal, and the times are now in the record books.

“We decided to focus on relays at the Mission Viejo competition,” Petersen said, “but will resume pursuit of individual goals when we each age up.” Mann, Scott and Anderson will join new age groups next year, so we’ll likely see them establish new individual age-group records in 2019.

Great job guys. You could have DQd and left my Oregon team WR 400 free relay alone but no, my little brother Mike had to spoil it!

0
0
Reply
One For The Old Dudes

4 guys with an average age of 60, and they averaged under a minute on the 4x100MLC relay? Impressive!

Thanks for this nice article. Congratulations are in order. Swam with Mike & his brother Jon in the early to late 1980’s at local USMS meets, fun guys. We also all played periodic water polo if I recall correctly, though there was not a lot organized back then. Mike & the others here have obviously stayed in great shape. Training at altitude doesn’t hurt either.