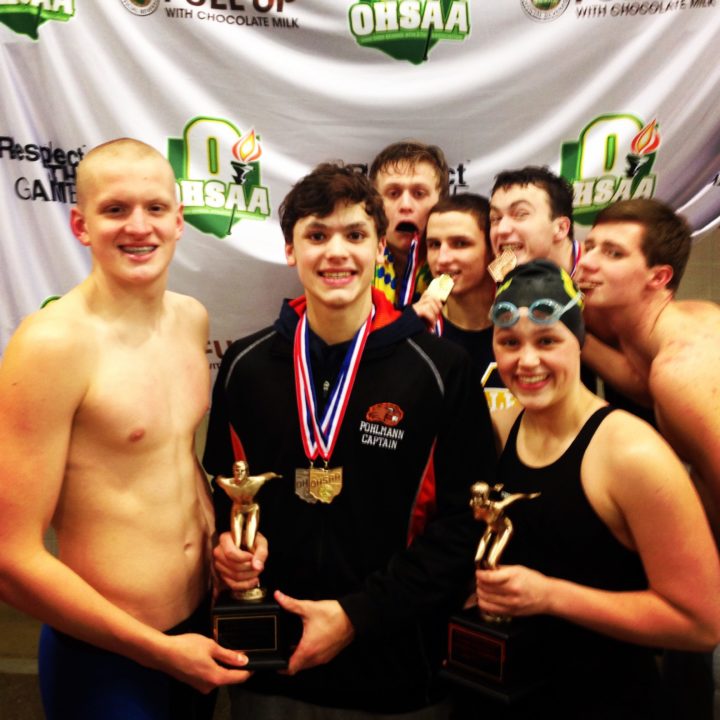 In one of the more anticipated races of the night, the top six qualifiers in the women’s 200 freestyle were all sub 1:50. The field was relatively together at the half way mark, but Alisabeth Marsteller of Ursuline pulled away with her 27.1 & 27.4 second half splits. She finished in 1:46.78, that broke Whitney Meyers’ 2002 record of 1:47.19.

Grant House of St. Xavier did not disappoint in the men’s race. He got out and took control, and finished in a blistering 1:35.84. And let me remind you again, he is just a freshman. He now is under a second off Joe Hudepohl’s 1991 record of 1:34.96.

There was a tie for second with Tommy Cope, Vandalia Butler, and Michael Reilman, Cuyahoga Falls, at 1:38.64.

Ursuline kept the wins rolling with Sydney Lofquist winning the 200 IM in a time of 2:00.13. Lofquist was a transfer to Ursuline this season, coming from Division II team Dayton Oakwood. Ross Palazzo of Hudson won the boys event in 1:48.75. Cooper Hodge of Moeller was second at 1:50.42. Mark Gangloff owns the state record at 1:47.63 and with those two boys both returning next season, that record is in danger.

In the surprise win of the night, freshman Ashley Volpenhein of Mason won the 50 freestyle in 23.34. She was the only freshman of the field, in a field that’s dominated by upper classmen. Senior Thomas Trace of Upper Arlington won for the boys, in 20.61, just over St. Ignatius senior Nathan Christian, 20.65.

Emily Slabe, Ursuline, got her hand to the wall over charging Sycamore junior Cara Norris in the 100 butterfly. Slabe touched in 55.12, just .02 ahead of Norris at 55.14. Westerville North Mason Miller finished first on the boys side, 48.32, over Henrik Pohlmann of Beavercreek, 49.01.

In another deep field in the girls 100 freestyle, there was two state champions within the field – Marsteller and Volpenhein. Gracie Long of Upper Arlington had the lead, splitting 23.8 to the feet, but Marsteller used her 200 speed to charge home in 25.6 to finish at 49.75. Long was second, also under :50, at 49.93.

House returned to the pool again, again leading start to finish, in the 100 freestyle. He finished at 44.26, splitting 21.3 to his feet, easily topping St. Ignatius Christian, 45.14.

Loftquist doubled up to win her second event in the 500 freestyle at 4:46.63. She battled with 2013 champion Zoe Thatcher, but pulled away around the 300 mark and did not look back. Thatcher was second at 4:49.45. In an under classmen showdown, sophomore Hassler Carroll a very strong second 250 to power past, and outsprint freshman Joshua McDonald on the last 50 to finish at 4:30.23 to 4:30.46. The two should have some good races over the next few years.

Ursuline’s event win streak was ended when Upper Arlington won the 200 freestyle relay in a new state record of 1:33.87. Ursuline finished second, also under the old state record, at 1:33.96. Upper Arlington had the lead from Long, who had an opening split of 23.07; they were able to hang on even with a 22.6 & 22.5 back end splits from Temarie Tomley and Marsteller of Ursuline.

Slabe double dipped winning her second event in the 100 backstroke. She was just off her prelims state record of 53.35, as she finished at 53.95. Hannah Whiteley of Springboro was second, 54.28. Pohlmann had the win on the boys side easily, finishing in 48.24, over a second ahead of the second place finisher, Thomas Trace of Upper Arlington, 49.36.

In another freshman surprise, Hanna Gresser of Cuyahoga Falls bested seniors Kennedy Herbert, Green, and Molly Washko, Strongsville, at the touch to win in 1:02.94. Gresser was out the slowest of the three, but her 32.9 back end split won her the race. Palazzo looked primed to set a new state record, but fell a bit short, finishing in 55.19 for the win. Jack Barone of Toledo St. Francis was second, 56.11.

Wrapping up the night, Ursuline crushed the state record with a winning time of 3:21.89. They opened up with two 51- splits from Lofquist and Slabe, but a 49.5 from Tomley and 49.3 from Marsteller pulled them away from second place team, Upper Arlington. Long anchor in a 49.7 for Upper Arlington.

Claire Gilmore of Mariemont remained calm the first half, but hammered down on the back end to win the event in 1:48.38, over Allie Wooden from Cincinnati Country Day at 1:49.21. Brock Turner set a new state record with his winning time of 1:38.42. His Dayton Oakwood teammate Jackson Higgins was second at 1:40.46.

It was a senior sweep, as Emily Murphy of Lima Shawnee won the event in 22.95. Macie McNicholas, Gates Mills Gilmour, was second at 23.14, and Cheyenne Meek of Port Clinton was third, 23.37. On the boys side, Trevor Lake finished under :21, to win in a time of 20.93. Cincinnati Seven Hills senior Panos Skoufalos was second at 21.30.

In another sprint freestyle senior battle, Hannah Stevens of Lexington won the 100 freestyle in 50.06. She bested seniors McNichols and Murphy, who finished second, 50.30, and third, 50.76. Lake doubled up on the sprint wins, taking the 100 in 45.21, which was also a new state record for Division II. Trenton Wolfe of Bidwell River Valley was second, 45.94.

Claire Doerr of Gates Mills Hawken won the 500 freestyle at 4:52.14. Turner returned to the pool for yet another win and state record in the boys race, winning in 4:24.31. His teammate Higgins was once again second in 4:30.82.

Stevens doubled up with another individual win in the 100 backstroke with a final time of 54.00; that was just off her new state record of 53.87 in prelims the day prior. Cincinnati Seven Hills went 1-2 with Skoufalos and Matthew Marquardt finishing at 51.45 and 51.48.

The girls from Dayton Oakwood claimed a title with Lydia Pocisk in the 100 breaststroke. Her final time was 1:03.72. Rutter claimed his second state title with a winning time of 56.24, just over Michael Eaton of St. Clairsville, 56.62.

In the final event, Gates Mills Gilmour claimed their second relay title in the 400 freestyle relay. They captured the title thanks to a 49.9 anchor split from McNichols. On the boys side, it was a very close race between Dayton Oakwood, Cincinnati Seven Hills and Gates Mills Hawken.

This was Jerry Holtrey, coach Hawken, last state meet. After 45 years at Hawken, not a bad way to leave with a girls title and boy runner up!!

I sort of wish it was not divided into divisions though. It was fun going up against ever high school!!

Wow, there are some outstanding individual swims, relays and splits here! Considering how much press the DC/VA/Metro area gets for H.S. swimming (yes, a couple records), but they should look here for fast high school swimming!

Nice Recap! Will WA State be recapped to from this past weekend?

Yes. We are aiming to finish recapping all of the state meets by the end of the day tomorrow.