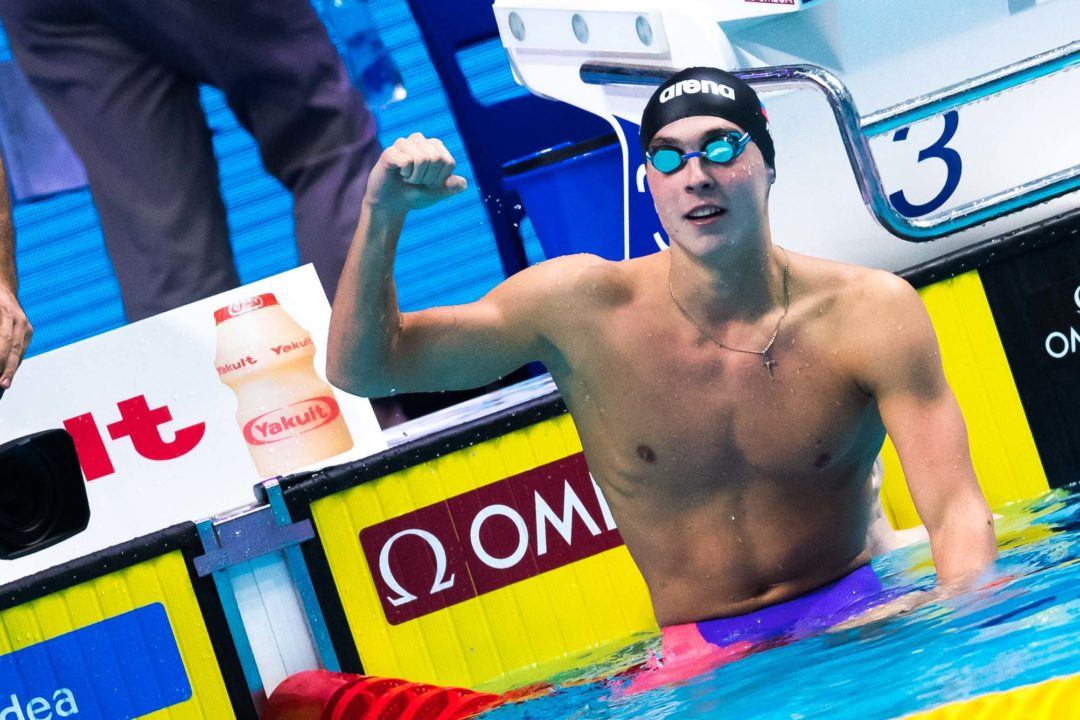 Elite swimmers are trying to destroy every habit you've worked so hard to instill in your athletes for generations. Current photo via Mike Lewis/Ola Vista Photography

Elite swimmers are trying to destroy every habit you’ve worked so hard to instill in your athletes for generations.

First, Sun Yang and Katie Ledecky, the two fastest distance freestylers in history, both started double breathing (and sometimes triple breathing) into their turns en route to World Records. Then Ye Shiwen broke the 400 IM World Record without doing any kicks or pullouts on the breaststroke leg underwater.

On Friday in Budapest, Chupkov became the first Russian to ever win the 200 breaststroke World Championship, taking top honors in 2:06.96 – a new European Record and the second-best time in history. While doing so, he had his hands spread prior to his breaststroke pull out, though only on the turns walls, colloquially known as the “superman” position, rather than together in a tight, theoretically more hydrodynamic streamline. In a stroke where quantity of propulsion opportunities are so relatively limited that we’ve all been trained that reducing drag is the most important thing, he opted to spread his hands in a counter-intuitive position.

Let’s take a look at a breaststroke pullout. Typically we teach swimmers to move from a streamline position, to a superman position, to then initiate the pull down motion. In that initial streamline position, that is where to do that dolphin kick, as we have come to learn that having a separate kicking and pulling motion reduce drags. For those that have been around the sport for a bit, not too many years ago, swimmers would dolphin kick and pull down at the same time.

So with that knowledge of that skill in our mind, I go back to that thought—do you produce less drag in the breaststroke pullout by beginning in streamline, dolphin kicking, and then moving into the pull down, or by just starting right in superman streamline and initiating the dolphin kick from there?

The more I sit here and think about it, sometimes technical skills benefit the  athlete when taking away components. Some athletes get too rushed by multiple technical elements, in a short time frame, and in do all parts sloppy. And the breaststroke pullout is a technically complicated component in a short amount of time within the stroke. This could be something Chupkov struggled with. In efforts to simplify the skill, he just gets right to it with a superman streamline. And to be perfectly honest, he doesn’t really seem to lose much ground coming off the wall in such fashion.

What I think is interesting though, is that Chupkov only does this adjustment on  turn walls; he initiates his pulldown the typical way off the start. Unfortunately due to camera angles, I can’t really tell if his traditional pullout seems better or worse than his turn ones. But it’s worth to note that he made the decision that a streamline off the start reduces drag for him, while off the turn, it does not.

This sort of technical difference of Chupkov from the norm reminds me a lot the top arm breakout in freestyle and backstroke when I was coaching. I would implement it on some athletes, and some I would not. Some benefitted from it, while some did not. And then on the big scheme of the sport, it is a technical aspect where you sometimes see it, but not a majority of athletes do it. These type of technical deviances are something you work on in the later part of your career, where any sort of technical advantage for you is necessary.

But that is my opinion. Maybe we will move in a direction of teaching age groupers to push off in superman for the short axis strokes—breaststroke and butterfly— since that is the position the stroke is initiated from. Perhaps that could simply teach some skills to younger swimmers. I know I spent hours of my club coaching and camp instruction going over TIGHT streamlines.

But that is exactly why we watch what the best do. They constantly are innovating our sport, and challenging the norms to break the barriers.

You can watch the video of Chupkov’s race below, courtesy of NBC Olympic. The best views of his pullouts from underwater come right around the 3:00 mark.

Liked the analysis. Can you give rowdy some tips for commentary?

Don’t we have the equivalent of a wind tunnel flume by now?

Denis Pankratov had his hands apart too, and he was a pioneer in the underwater dolphin kick.

4
0
Reply
He Gets It Done Again

For what it’s worth, Gary Hall Sr. wrote an article for SwimSwam talking about streamlines, and he mentions that when they tested multiple streamline shapes, he was surprised to see that separating the arms didn’t increase drag that much.

I tired this yesterday after seeing him do this in the semi. I pushed off and glided as far as I could. I got the same distance, maybe a tiny bit further with the superman than with a tight streamline. I was surprised. But my streamline and body line has never been very good because of my tight shoulders. On land, if i do a tight streamline my arms are pointed at like one o clock. I have to lean back a little to get my arms pointed straight up at 12. It’s the same in the water, I can never really get that streamline with a perfect body line because of my poor shoulder flexibility. With the superman, I… Read more »

At least one of the Japanese breaststrokers does the same thing. I tried it and my hands deflected.

My first age group coach use to tell us “get your technique perfect, and then we’ll play around with possible changes.” We were a small team, so if you fulfilled the first part of that, he would work with you on any idea you had, regardless to how crazy or “technically” incorrect it might be. The stopwatch was always the final judge. A vast majority of the ideas didn’t make the cut, but I remember a few things we did with my backstroke that made no sense intuitively and no one else at meets were doing that we estimate shaved a little over a second off my 100. There were two other guys on the team that tried the techniques… Read more »

Chupkov’s glide is out of this world. Doesn’t seem to be the largest dude but somehow he just keeps that speed underwater. Must be the cross. FINA is getting on this one soon…

I couldn’t believe how long his glide was in first 100. He must have a killer kick. Regarding pull, flexing muscles in your entire body in all stages of the pullout is much more important than arm position, although I cannot see how superman position can possible be faster than the tight streamline position. And G.I.N.A… Chupkov is an orthodox Christian, so meeting Pope would not help him much 🙂