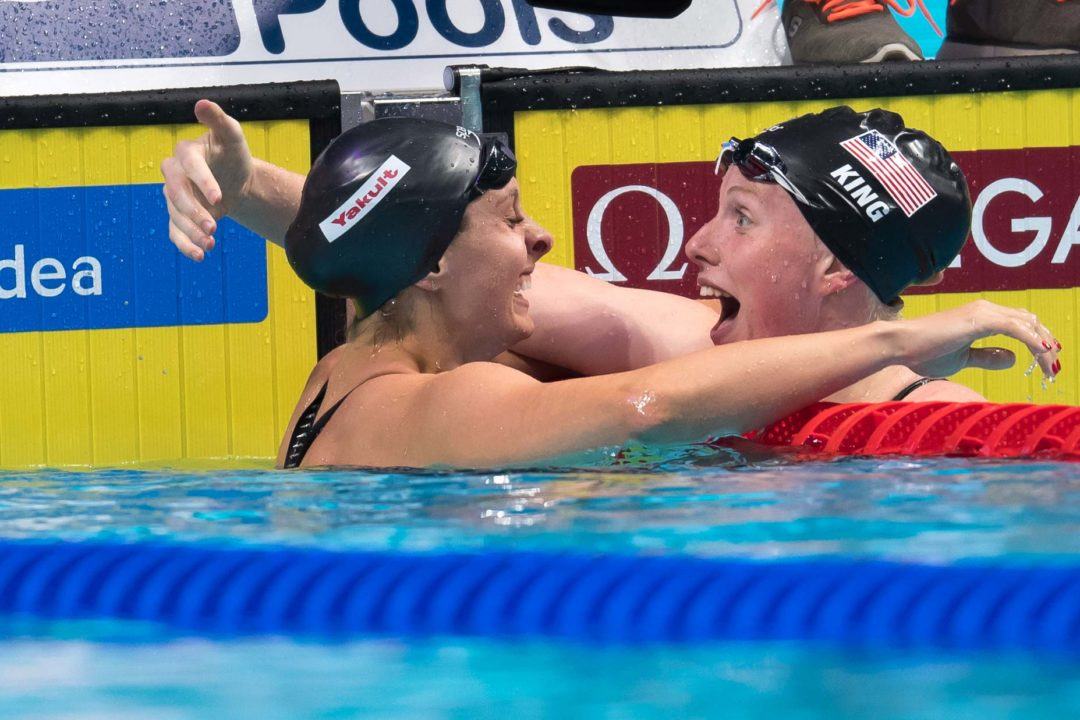 Lilly King and Katie Meili will be back in action on day 7 in the women's 50 breast. Current photo via Mike Lewis/Ola Vista Photography

The women’s splash n’ dash goes first, where Sarah Sjostrom and Simone Manuel will swim side-by-side after Manuel’s massive upset over the Swede in the 100 free final. Despite that hiccup, Sjostrom is still the favorite here and overall has performed well.

Those two will swim in the 10th and final heat, with Pernille Blume and Ranomi Kromowidjojo highlighting the other two circle-seeded heats. Both have performed very well here, especially Blume who won bronze in the 100 free after failing to make the final in Rio. She is the reigning Olympic gold medalist in this event, however, and Kromowidjojo was the champ back in 2012.

The men’s 50 back will be a fun one, with a few of the competitors making their individual debuts here in Budapest. One of those is Frenchman Camille Lacourt, who will look for the three-peat in his last competitive meet. His countryman Jérémy Stravius will join him in the 5th of 7 heats.

The three fastest performers in history, Ruta Meilutyte, Yuliya Efimova and Lilly King highlight heats 4, 5 and 6 of the women’s 50 breast, and all have a legit shot at gold. Defending champion Jennie Johansson joins Meilutyte in heat 4, and Great Britain’s Sarah Vasey and 100 breast silver medalist Katie Meili will both have lane 5 in heats 5 and 6.

Next will be the mixed 4×100 free relay, where there will be a total of 26 teams competing in three heats.

After winning the men’s and women’s 100 free titles, as well as the men’s and women’s 400 free relays, both for the first time simultaneously since 1991, the Americans will be the heavy favorites here. They’ll swim in heat 1, with the Italians and Russians in heat 2 and Australia, Hungary, Netherlands, France and Canada all contesting heat 3. Lineups will be announced prior to prelims.

The men’s 1500 will wrap things up with a total of four heats. Park Tae Hwan will swim out of one of the non-circle-seeded heats, holding lane 4 in heat 2.

Heat 3 will have Australians Mack Horton and Jack McLoughlin in the middle of the pool, with Felix Auboeck, Wojciech Wojdak and Sun Yang all in there as well.

The last heat will feature Italians Gregorio Paltrinieri and Gabriele Detti, the Olympic gold and bronze medalists from last summer. Mykhailo Romanchuk will hit the water for the first time at the meet, as will Americans True Sweetser and Robert Finke who make their Worlds debuts from lanes 1 and 8.

I’m guessing the prelim lineup for the mixed 4×100 free will be Lia Neal, Olivia Smoliga, Zach Apple, and Michael Chadwick since all four haven’t gotten much racing in so far. Worrell will be doing the 50 fly final later so it’s best to keep her rested. Haas needs some rest for the medley relay prelim.

Unless they break, this is a certain gold. They have no competition here

Basically for the next 4 spots, they just have to choose who gets to win another medal…
If we were playing fair and assuming no schedule conflicts, it should probably be Worrell and Neal, and Pieroni and Haas.

Imagine this event in the 2020 Olympics, with US with Manuel, Comerford, Adrian, Dressel against an in form & injury free Campbell sisters, Chalmers & McEvoy. Maybe in 3 years time, some of these swimmers are superseded.

‘Imagine if this event’.

Adrian likely superseded by Townley Haas by then. Mcevoy by Carwright. Would be an EPIC race.

Speculation on mixed free relay. Team USA can use Chadwick/Apple/Smoliga/Neal for qualification. Haas who’s been spectacular this meet can rest up to be used in the men’s medley relay prelims on the free leg.

Would love this lineup to happen

As a footnote, Manuel and Weitzeil swim the women’s 50 m freestyle preliminaries.

Pieroni would probably want to swim and he’s earned a spot over Chadwick. I can see Haas getting the morning off though.

Dressel not swimming in the morning. Save that incredible speed for when it counts! Excited for what history we may see tomorrow.

He has zero swims until tomorrow evening. ☺

I remember just 3 or so years ago considering Dressel a pure out sprint guy. Now when you look at what he accomplishes in the last 15 meters it reminds me of something out of phelps’ ’08 or ’09 repertoire. Troy has done an amazing job with Dressel allowing him to take on so many more roles for USA swimming than just a freestyler. His butterfly has shocked the world this year, but I suspect his breaststroke and backstroke have similar potential. The guy has been a 51 100 Breast in yards on medley relays. 200 IM could be a real threat come Tokyo.

Am I the only one who wonders what this kid could do in a 200 fly with another year of training?

He’s the one who said it. He consistently signs up for events like the 200 free (at world champs trials) because he doesn’t want to become known as only a sprinter. 200 fly would seem like a logical, although ballsy, move. If he could swim it Le Clos like but with some real endurance he could move one step closer to filling Phelps’ big shoes.

He said himself that he doesn’t want to be known as a sprinter. He can race pretty much anything – some training and some big balls and he can muster a 200 fly that would challenge anyone come Tokyo. Imagine if he swims the 200 fly like Le Clos….

Also remember that he did a 55.80 LCM 100 Back in Atlanta in May, early season. Troy has done a great job with an incredible talented kid.

I really want to see what he can do in a tapered 200 IM. He is the best of Manaudou and Lochte combined. He had the top time in the country in the 200y IM last year in the NCAA before conference championships started. He went 1:42, closing in a 23.3! Who does that?? Troy has trained more guys to swim under 1:59 in the 200 IM than any coach in the world. If Caeleb wants it, he can absolutely be the next great 200 IMmer.

Can you imagine the pressure knowing that everyone is waiting for a new world record tomorrow night in the 100 fly? Wow. Hats off and kudos to Caleb. He is special. Phelps is gone (maybe), but Caleb can help us stop mourning for Michael with an other-worldly 100 fly tomorrow night.