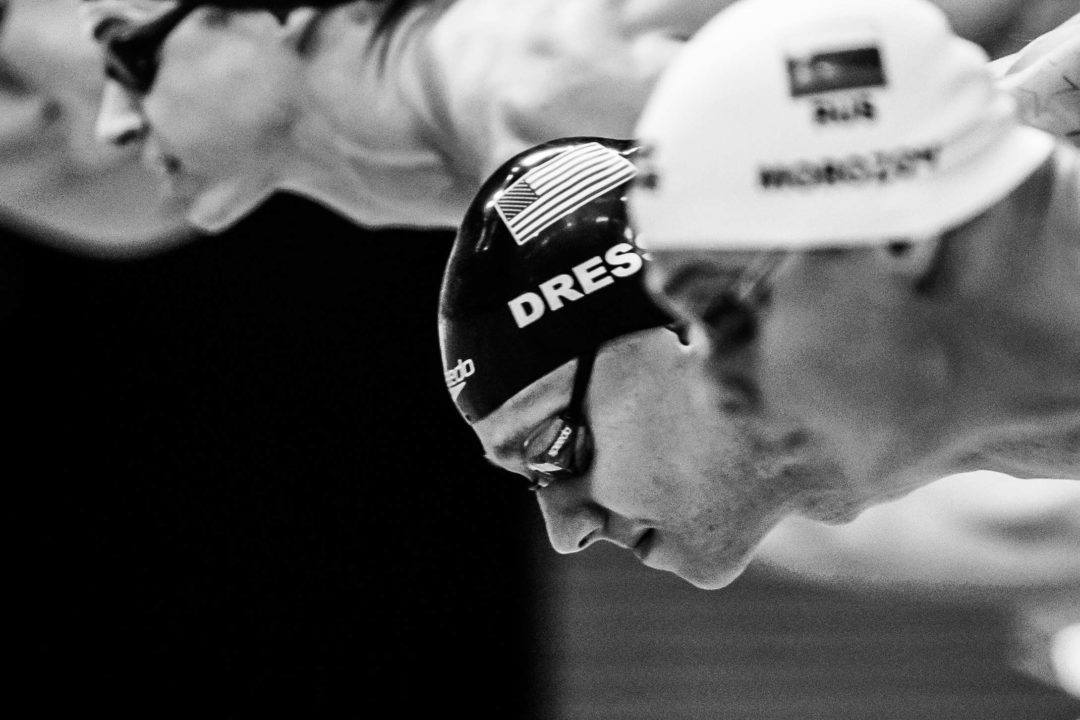 There's no argument that in the sport of swimming, there's no direct correlation of dominance between short course yards and long course meters. But what connection does exist between the two is subject of constant debate among fans. Current photo via Mike Lewis/Ola Vista Photography

There’s no argument that in the sport of swimming, there’s no direct correlation of dominance between short course yards and long course meters. But what connection does exist between the two is subject of constant debate among fans. And while anecdotal evidence is hardly definitive enough to end the debate, today’s 50 free is a resounding vote in favor of the connection between the two courses.

In the history of NCAA swimming, only two men have ever split 17 seconds in a 50 free. It’s a bit of a hallowed barrier, especially as 18-second swims have become common enough to almost feel pedestrian.

Certainly there’s some ‘correlation does not equal causation’ at play here. Morozov and Dressel are both fast. Their performances might show that fast swimmers can be fast in both yards and meters, something no one would argue. But it also suggests that time spent “in the bathtub” isn’t exactly dooming swimmers to careers of no acclaim in the big boy pool.

(Aside: Is it great that somewhere between “the bathtub,” Dean Farris, Joe Schooling’s practice times and the Shields Piano, the SwimSwam comment section is suddenly churning out its own bona fide memes? I’m genuinely asking.)

Looking on a broader scale, 65 total medals have been won thus far by swimmers who competed (or are competing) in the NCAA. That’s a sample too large to ignore. It comprises 41 different swimmers representing 19 different colleges and 4 different nations (at the moment: USA, Canada, Hungary and Brazil).

There’s an argument to be made that short course yards swimming is the perfect training to become great at long course. Yards swimming more than any other course emphasizes turns and underwaters, the vital piece that often seems to separate the good swimmers from the really great ones. Short course swimming also values starts more than long course swimming, something Dressel in particular has become notoriously dominant at.

The NCAA format also forces swimmers to get used to contesting multiple events in a single session, and performing well over multi-day meets in highly-charged atmospheres. Look at Dressel, who typically swims 4 events in a single college dual meet that spans maybe 3 hours. At NCAAs, he swam 14 races over 4 days, comprising just 7 different sessions. He has one of the busiest World Championship lineups of any swimmer, but his schedule is arguably easier in terms of event density: he’ll swim a likely 17 times (assuming he swims only finals of the medley relay and mixed free relay) over 8 days and 16 sessions.

The 50 free is unpredictable, and there’s no guarantee that Dressel and Morozov will both medal. But for now, both are showing that short course dominance does indeed transfer over to the Olympic-sized pool – perhaps more often than we might think.

To answer your true question: the memes are amazing and the people who started them are almost as great as Dean Farris

Makes you wonder what memes are next.

Think the answer to the question is really that great swimmers excel in any pool/course.

And that Staab guy? Heard about him loads SCY then never heard of again.