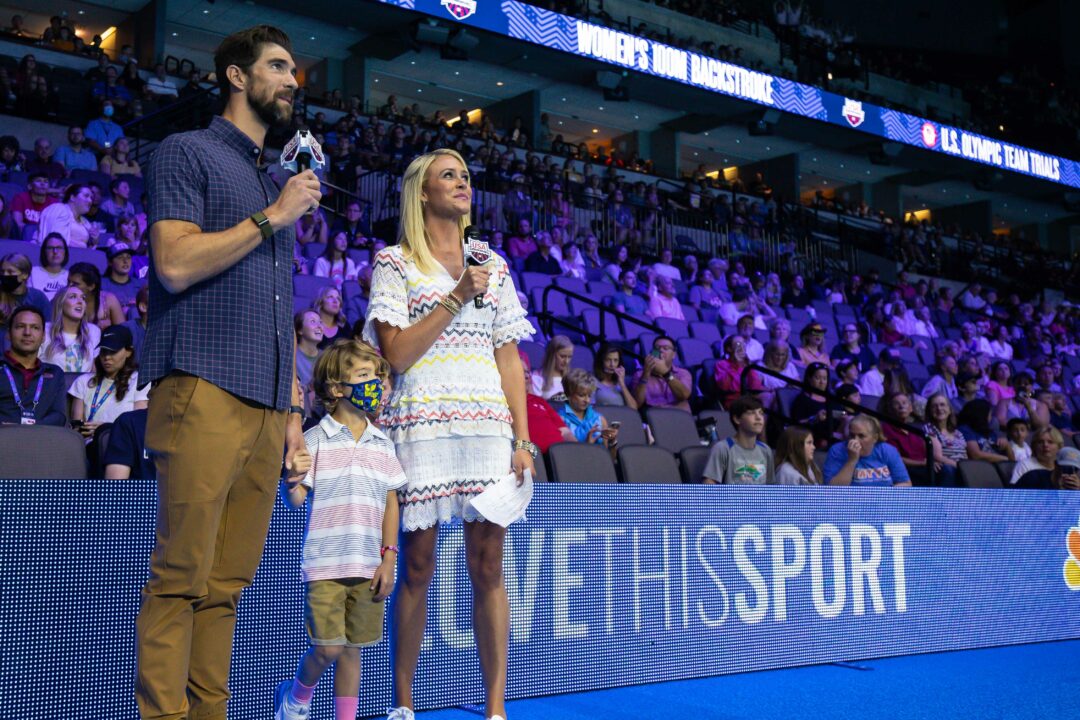 Phelps will serve as a primetime correspondent in Tokyo and will also join Dan Hicks and Rowdy Gaines in the booth for select swimming competition. Archive photo via Jack Spitser/Spitser Photography

STAMFORD, Conn. – July 19, 2021 – Michael Phelps, who has won more total Olympic medals (28) and gold medals (23) than anyone in history, will join the NBC Olympics team in Tokyo, it was announced today.

Phelps, who joined the NBC Sports team on several nights at the U.S. Olympic Trials for Swimming last month in Omaha, Nebraska, will serve as a primetime correspondent in Tokyo and will also join Dan Hicks and Rowdy Gaines in the booth for select swimming competition.

“From the moment he joined our team at Trials, Michael’s ability to provide insightful analysis, thoughtful commentary and tell entertaining stories was apparent,” said Molly Solomon, Executive Producer & President, NBC Olympics Production. “We’re thrilled to have him join us in Tokyo and our audience will benefit from hearing the perspective of the most decorated Olympian of all time.”

Phelps competed in five Olympic Games from 2000-16 and holds the world record in the 400m individual medley. He is also the subject of the Peacock Original Series, Michael Phelps: Medals, Memories & More, a three-part, NBC Sports-produced retrospective on his historic career. Click here for more information on the series.

In 2008, he established the Michael Phelps Foundation to promote healthy, active lives, especially for children, primarily by expanding the opportunities for participation in the sport of swimming.

This made waaaay to much sense to not happen

No offense to the GOAT, but would rather see Elizabeth Beisel get the role. Or, even better MP and Elizabeth running the show, with human interest stories moderated by Ryan Lochte and Anthony Ervin. Time for some newer, younger voices.

Rowdy: Alright Michael, this was your event, what’s your take

Michael: Well Rowdy, I think the one thing that is plain as day is the fact the Michael Andrew is at a supreme advantage because he is going to be BREATHING TO HIS RIGHT on that last leg! That was how I won those races, I was ALWAYS aware of where my opponent was on that last leg

Last edited 5 months ago by Swimer
27
0
Reply
He said what?

Can we “borrow” Nicole Livingstone from the Australians? She is the gold standard.

We don’t even get her 😭 Maybe she’s doing the IOC world feed?

Most likely, she & Bruce McEvany together are the gold standard for sure.