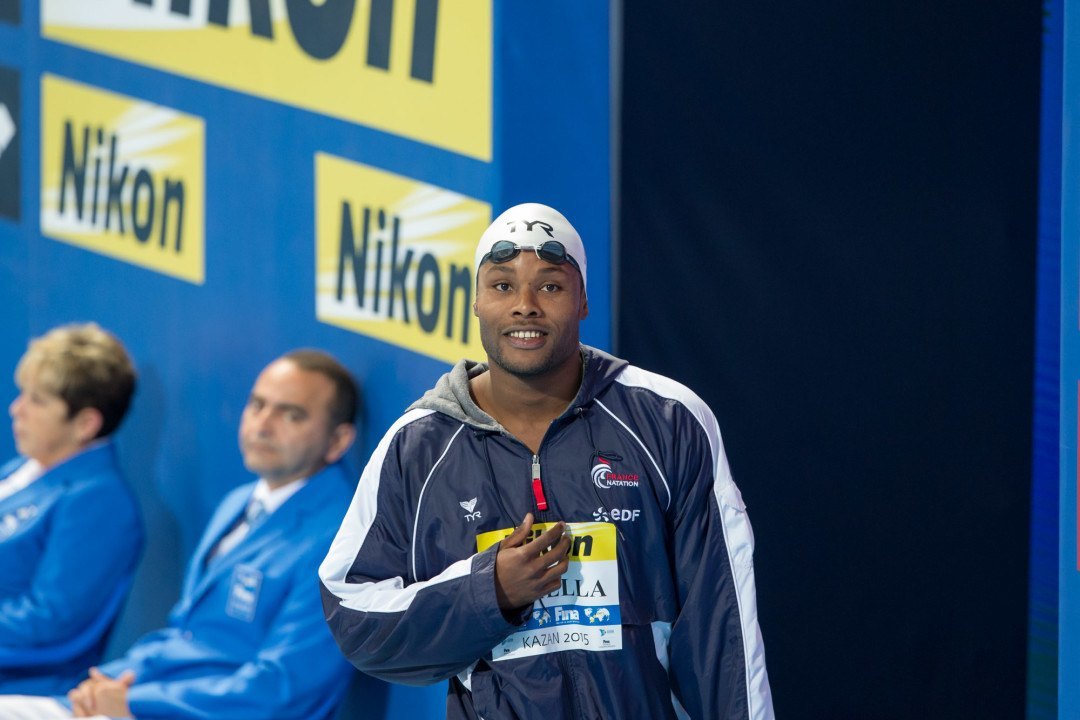 Marseille's Mehdy Metella lowered his own French National Record by .19 and became the only sub-51 flyer in the world so far this season with 50.85. Archive photo via Tim Binning/TheSwimPictures.com

In his final at-bat at the 2019 French Elite National Championships in Rennes, Marseille’s Medhy Metella blasted a 50.85 to win the 100 fly. It was his first time under the 51-second barrier and it lowered his own French National Record by .19. Metella was 1.07 seconds faster than he’d been when he won this event a year ago. His performance is the only 100 fly under 51 seconds so far this year and it puts him within 1.03 of Michael Phelps’ 2009 World Record of 49.82.

Metella’s new record is due entirely to the second half of his race. By going out 1/10 slower than in Budapest, where he last set the French mark, he was able to come home .31 faster. It was the first time he broke 27 seconds on the back half, splitting

Metella had already qualified to swim the 100 fly at 2019 World Championships thanks to his podium finish at 2018 European Championships. Still, he hit the qualifying time in prelims, going 51.51, but he was the only French swimmer to do so. Jérémy Stravius of Amiens missed the cut by .19, going 52.00 in the morning.

Wait the French qualifying standard is a 49.99. He missed the Worlds Cut.

I get why everyone is making fun of those standards, but I think the criticism is a bit over the top. In the end no-one at British swimming for example seriously thinks about not sending Proud just because he didn’t make the cut in the 50 free. Everyone who has a realistic chance of making the final will be selected, those crazy standards serve two purposes in my opinion:
1) Motivate swimmers to train extra hard (Don’t agree that crazy standards will necessarily have that effect)
2) Make sure that only swimmers with a realistic chance of making the final will be send. Most federations are (sadly) judged (concerning funding) by how many medals they bring home, not… Read more »

He still has time to drop in the 100free, and if Metella drops another few tenths, he will be a strong contender for medals in this event

Amazing swim, but is the “He’s now 1.03 seconds away from the WR” take really necessary? Bottom line is that record is ridiculous and he really isn’t that close to it.

Anyway swimming is getting FAST this year. Obviously some will underperform come worlds but a final of Dressel, Le Clos, Guy, Milak, Schooling, Metella, and Li is ridiculous. All those guys can go sub 51 and I’m definitely missing some names as well. Some of them can easily not even make the final as there are several up and comes in this event like Lanza and Kusch. This event is stacked now…

I think you only named 7 guys, so one spot in the final would still be open + many of the guys you mentioned (Guy, Schooling, Li) haven’t shown anything recently that suggests that they are capable of sub 51, on the other hand I have a strong feeling that Minakov will make the final. I am too lazy to look it up, but I think Codia has the fastest time since the beginning of 2018 and you also didn’t mention him …
Edit: Codia only has the 2nd fastest time, Dressel was about 0.1 seconds faster than him last year. As far as I saw none out of Guy, Milak, Schooling or Li has been sub 51 since… Read more »

Milak will be in the final, Guy and Schooling probably not. Who knows about Li and Codia? I think Kusch makes it

Would be very happy if Kusch would make it. In my opinion 51.35 must be pretty close to his peak, I think the realistic best case scenario for him would be to swim 51.5 at the world championships and I am not sure whether this will be enough to make the final.

We need a black male to win at world champs or the Olympic level, individually!!

I’m not sure we need” a black World champ, the medals are irrelevant. I think we just need more black/brown faces for black/brown children to see when watching swimming on TV. That would do so much to get more children from those backgrounds learning to swim.

My statement is still not wrong…

I don’t know about France or GB but as far as I know all kids in Germany have swimming classes in elementary school + sadly I don’t think that the kids who don’t know how to swim are the ones who will be sitting at home with their parents and a cup of warm chocolate watching swimming competitions … + the families with children who don’t know how to swim are probably the families that don’t have a lot of money, so for those kids it will always be far more interesting to start playing football/basketball because there is so much more money in those sports.

It is a nice sentiment, but I don’t really think that it is much… Read more »

in general people don’t pick which sport they’ll play based on the amount of money they would make at the professional level. When I got to the point where I had to start choosing between sports, my considerations were basically just around which one was more fun/more friends involved. When baseball season started to conflict with summer swim season, I didn’t consider MLB salaries when picking which one I would keep doing.

I’m not sure this black people can’t swim phenomenon exists much outside the US.

There was a recent film about the phenomenon created by a UK-based filmmaker, Ed Acura. So, it at least exists there as well to some degree: https://swimswam.com/a-film-called-blacks-cant-swim-drops-february-1st-review/

I can assure you it does. In the UK a national survey back in 2012 and found that, of people identifying as “black Caribbean”, more could not swim than could swim. “Black African” number was similar. People of every other background had at least about 2/3s knowing how to swim.

I think at the end of the day we are talking about providing the opportunity and access to people around the globe to participate and excel in the sport of swimming.

Huge swim! Gonna be an exciting 100 fly field as we approach Tokyo.