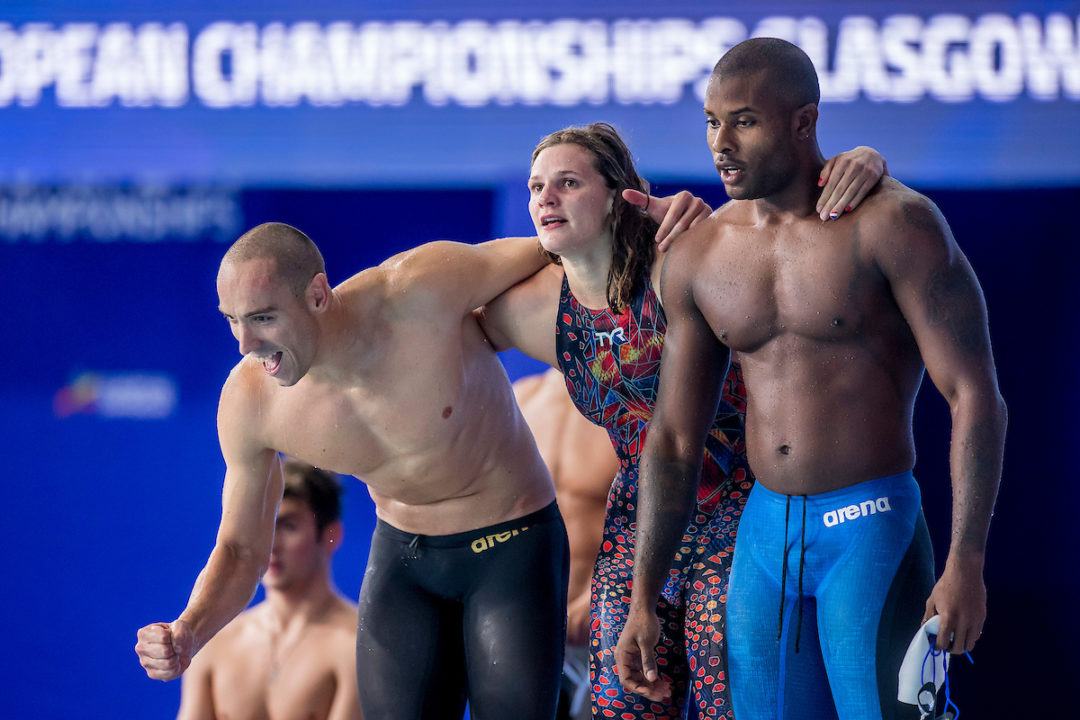 At the conclusion of the 2019 French Elite Nationals, the French Federation announced the names of 3 women and 8 men who will for the French selection for Gwangju. Archive photo via Andrea Masini/ Deepbluemedia/Insidefoto

Marseille’s Mehdy Metella lowered his own French National Record by .19 and became the only sub-51 flyer in the world so far this season with 50.85.

At the conclusion of Sunday night’s finals session at 2019 French Elite Nationals in Rennes, the FFN (Fédération Française de Natation) announced the names of the 11 athletes who will form Team France at 2019 World Championships in Gwangju, South Korea. Three of the swimmers, Charlotte Bonnet, Fantine Lesaffre, and Mehdy Metella, had prequalified for selection to the team by medaling in individual events at 2018 European Championships in Glasgow last summer. The other eight were added to the roster this week.

The French women did not qualify any relays, per the FFN’s qualifying rules. The men qualified only the 400 free relay. Athletes qualified to swim at Worlds are allowed one complementary event, according to the FFN’s rules, as long as they achieved a FINA A cut in prelims. Presumably, Bonnet will be able to add the 50 free, Gastaldello will be able to add either the 50 back or the 50 fly, and Wattel should be able to add the 50 fly. It is unclear if Lesaffre will be allowed to swim the 200 IM; she achieved the A cut in finals, not in prelims as stated in the rules.

They could field a 400 relay with Lesaffre as 4th swimmer and probably get in the top 12.

They could definitely field a medley relay with her at the very least.

What happened to Amaury Leveaux?

Wow. They almost have half a football team.

I know French swimming is not a powerhouse but more swimmers deserved to be on this team. By the way, Great Britain has yet to announce its team. I know it was not straightforward with automatic qualifying times, consideration times(the so called Table 2), and eight discretionary selections but you would have thought they would have been penciling in names progressively and then made a final decision at the end of the last competition day. Is this due to political decision-making?

not a powerhouse?! Your surely joking France is one the best in the world, I’d even say 3rd behind US and Australia perennially.

That might have been true once upon a time, at their peak c. 2012 and 2013, but today it is certainly no longer true.

France ranks 13th all-time in Olympic swimming medals. If we limit this to the ‘modern era,’ however you want to define that, they probably jump USSR, East Germany, Sweden, and Canada to crack the top 10, looking across an era, but I would disagree with 3rd.

France was never a powerhouse. They had a very good 2012 Olympics but that was largely due to two swimmers – Yannick Agnel and Camille Muffat who is sadly is no longer with us. Their men’s relay teams did well but they certainly would not have won gold without Agnel in the 4X100FS and in the 4X200 they wouldn’t have won a medal at all. To be considered a powerhouse a nation needs depth and France never really had it.

Farrel, Gandin, Lazare were difficult to remind also for me, swimming fan..
Sorry but you can’t consider Euro2012 at Debrecen as an indicative EuroChamps: too many absent, only Hungary, Italy and (perhaps) Germany with a complete roster.

True, all the Europeans in the year of Olympics is not a “whole”championship but statistically is the same as the others.
Debrecen is my home town and of course I was there with my whole team (alone) so I had the feeling of that and saw theese athletes.
Germany was interesting. Once was there (Europeans) at that time before the Olympics and nearly didn’t win anything, four years later they weren’t and the result was the same.

how is this relay fiasco going to affect their relay entries for 2020 Tokyo? are they completely limited to that one relay now or are there other chances to get more relays in for Tokyo?

Yikes, if this is true, they should feel ashamed for not sending relays to at least try. No wonder Bobo Gigi has been missing. It’s a a sad time for French swimming.

So with that logic… they are purposely going for the 4 team wildcard…. this is a worse strategy than every Brazilian prelim relay order (I kid…)

Just one French relay at worlds, a sad sight!

This is crazy with Olympic qualification on the line!

Wonder how many officials are accompanying the team. Someone ought to set near impossible goals for them to achieve before they get to go as well.