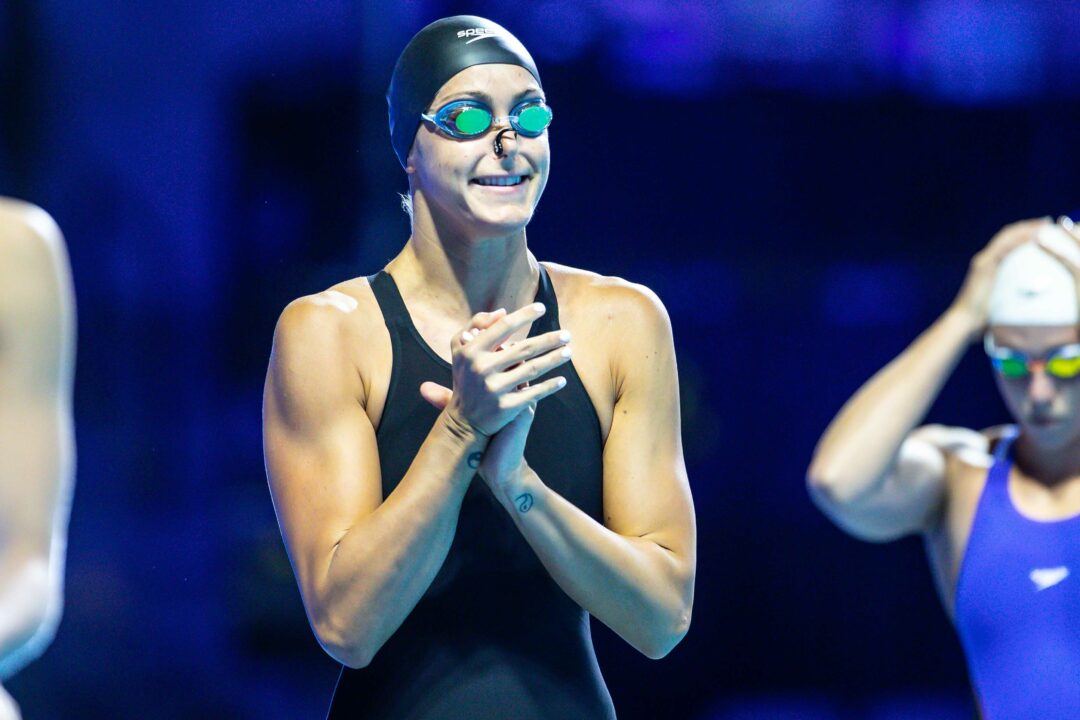 Linnea Mack is back into tonight's 50 free semi-finals after her prelim disqualification was overturned. Current photo via Jack Spitser/Spitser Photography

After posting a time of 25.09 in the women’s 50 free prelims, Linnea Mack was disqualified during the seventh and final prelim session in Omaha, appearing to put an end to her 2021 Olympic Trials.

Mack’s time had initially ranked her ninth in the field, and with the DQ, North Carolina’s Grace Countie (25.49) was bumped up into the top 16.

However, Mack’s disqualification has since been overturned, bringing her back into tonight’s session and giving her the chance to qualify for a second straight Trials final.

The DQ was reportedly for a false start.

Similar to what we saw in the women’s 100 breaststroke final when Molly Hannis’ DQ was overturned, the women’s 50 free will have a 17-swimmer field in tonight’s semis, with Countie slotted into Lane 0 in the second semi.

Mack, a 25-year-old who trains with Team Elite, swam in last night’s 100 free final, placing eighth in a time of 54.32. That left Mack two-tenths shy of sixth, where she would’ve been in position to be added to the Olympic team for the 400 free relay.

In the 50 free, Mack set a new best time of 24.85 back in April, ranking her eighth among American women this season coming into the meet.

Instead of just over ruling their officials on every call why not just have no officials.Basically the same thing and allows some unpaid officials to go and enjoy their day.

I’m still confused of the rationale to swim 9 swimmers in a final/semifinal. Either the swimmer is DQ’d or they aren’t. If they aren’t, then #9/#17 is out. Swimming 9 swimmers in these situations makes the #9/#17 swimmer in every prelims/semis results across the meet not actually equal. Especially when qualifications are on the line, those other #9/#17 swimmers would theoretically have a pretty legit argument of “well why not me, too, then?”

Think if in the women’s 100Fr semis this had happened. Suddenly, Simone gets another shot….

Probably because the 17th place qualifier shouldn’t get the joy of advancing taken away simply because the official made a mistake. Plus you could argue that the DQ could possibly have an impact on later swims, like a swimmer believing they only needed to go X time instead of Y time.

The DQ was overturned after a protest was filed and then video was reviewed. The qualifiers had already been announced. With 10 lanes available not necessary to undo the joy and accomplishment of 17th place (Countie). FINA has done something similar at Worlds

Yep, you articulated it much better than I did

I remember the first time I got dq’d. I thought I won a dilly bar.

It became a thing for our daughter, we’d go to DQ after the meet and laugh it off. About once a year until she got into her teens.

What was she DQd for?

What are these people being disqualified for and by who? Is it the same official (s) doing it?

This reminds me of when I assist with officiating local meets and there is always a parent who has 2 years of swimming knowledge who’s goal is dq anyone who doesn’t swim picture perfect like they do in TV.

I remember at one summer league meet my son swam at there was a parent officiating who thought swimmers are only allowed to dolphin kick no more than 5 yards from the wall. She looked at me like I was stupid when I pointed out the actual rule to her, then had an interesting look on her face after seeing me swim in the parent/coach relays at the championship meet (i.e. she realized I know what I’m talking about). 🙂

The Hannis situation, IMHO is completely different. There’s lots of video showing her kick, and it is unclear if it is legal. Her kick finishes with an upward dolphin kick, where her toes are not pointed outward. It is pretty clear that this part of her kick is propulsive, though probably not so much as the downward part. The breaststroke rule states “toes must be pointed… Read more »

The two officials from our LSC have over 20yrs of experience on deck each. They are mentors, unpaid officials administrators and generally known as among the best in our LSC and beyond. I presume everyone in deck has that kind of experience. I don’t think you’ll find anyone looking to DQ but all will call something they do see even if they get overturned.

And I think we’ve all met the overeager newer official who will find their favorite call and make it over and over eventually earning them a mentoring session to be educated. And yes, at summer club I’ve heard that someone got recruited to official because they were wearing a white polo and no one else.showed up:)… Read more »

Look I have no clue what those swimmers were DQed for.

But yes it was a false start or early takeoff it did need to be duel confirmed.

I just find the over turning strange

As an N3 national deck certified official and experienced starter myself, I find the overturning of a dual confirmed false start very odd. Perhaps there was compelling video evidence that convinced the meet ref otherwise. I can’t imagine any other reason why it would be overturned.

This DQ was for a false start (so the starter and the deck referee independently agreed that a false start occurred in real time). The officials at Olympic Trials typically have already worked national level meets and already know the expectations.

I can see a couple of things happening in these cases:
1) I wonder how much meet experience that most of these officials have had during COVID-19. Certainly a lot less than they ordinarily would have had.

2) The regular standard for disqualifications is that the benefit of the doubt goes to the swimmer. I can’t find any documentation for how video replay officials adjudicate the replays, but if the replay officials have also slid towards the any… Read more »

Do you know if the false start(s) were for flinching/rolling or actual leaving before the beep?