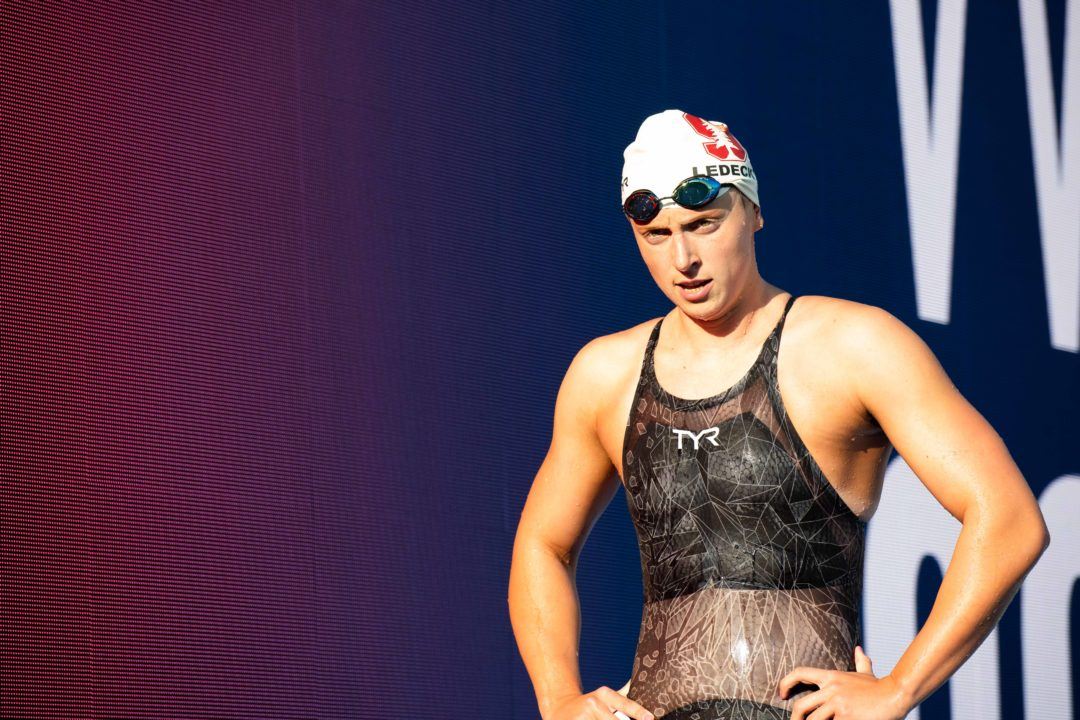 That means on top of the $7 million endorsement deal that Ledecky just signed with TYR, they'll owe her another $10,000 as a prize for the Pro Swim Series. Archive photo via Mike Lewis/Ola Vista Photography

The ‘shall we taper, shall we not’ has thrown a little bit of havoc (read: excitement) into the battle for 2018 TYR Pro Swim Series title. While the formal series itself is over, results from Nationals, where everyone has higher goals of ‘making the team for Pan Pacs,’ will count for double points toward an eventual prize of $10,000 in cash and a 1-year lease on a BMW.

Focusing on the top 5 coming into the meet, here are the standings after day 1 of Nationals:

Note: Because of the double points, it’s possible that someone else sneaks into the top 5, but USA Swimming only publishes points for 5, so we don’t know who’s 6th right now. Nobody new will contend for the title, though.

We have some action! On the final day of the 2018 U.S. National Championships, where the points are doubled, there will be at least an opportunity on the men’s side for a last-minute steal.

On the men’s side, after Zane Grothe had his best swim of the meet to win the men’s 400 free (3:46.53), while Chase Kalisz was idle, he’s now only 5 points back with each swimmer having one event to swim.

On Sunday, Kalisz will swim the 200 IM, where he’s the top seed, and Grothe will swim the 1500 free, where he’s the top seed. If all goes according to chalk, then Kalisz takes the title and the prizes, because both swimmers would earn 10 points. For Grothe to win, he’ll need to finish 2 places higher in the 800 free than Kalisz finishes in the 200 IM. That’s not an impossible task, given that both swimmers have already qualified for Pan Pacs, though it isn’t the most likely scenario with Kalisz as the defending World Champion in the 200 IM.

In the women’s race, Leah Smith did exactly what she needed to do, and all she really could do, on Saturday: stay within 10 points of Ledecky, and hope for her to scratch in the 1500. While that did happen, Smith too scratched the 1500 free, where a win would’ve been worth $10,000 plus a new car.

That means that the women’s title is clinched for Ledecky: her 2nd-consecutive title in the series.

Surprised to see smith scratching and passing on 10k. I suppose they might have both agreed to scratch together?

MA being 3rd at 19 is amazing. Highest placing 19 year old male in the history of the competition. Just might be the first 20 year old male to win it.

Ledecky won it when she was 20.

Maybe we should stop with MA amazing at 19. He’s a pro swimmer for a long time! He’s great and I like watching him develop for so many years but please. Looks like many swim fans have a short memory.
We have seen in the past and not so long ago 15-year-old, 16-year-old, 17-year-old or 18-year-old boys who were LCM world champions, olympic champions and/or world record holders.
Sometimes it looks like swimming has started 2 years ago. 😆

He is a sprinter where you developed later since it has to do with upper body strength this is different from a guy making it at 15 to 18 in 200’s. Also, male swimmers from 15 to 18 are a smaller group that are Olympic champions than girl swimmers. Guys developed physically later. Most male swimmers average 20 years versus 16 years for girls.

In support of Bobo: Anthony Ervin won 50 free and Kyle Chalmers won 100 free at the Olympics, both did it at younger age than Michael Andrew is now.

Can’t both things be true, though? There have been examples of people younger than Andrew winning Olympic medals in the sprints, but most success in those events come from “older” swimmers.

We should still assume Andrew can keep improving as he matures, is my point.

Michael is a younger world champion than both of them and it’s not his fault the Olympics are only ever 4 years. Also wow two examples totally proves someone right

The only scenario for Leah to win the prize today was the first place in 1500. That most likely wouldn’t happen. It may require her to set a personal best in this event. Her decision is wise I think.
She WAS in control of this competition before meet started and the only thing needed was to be #2 and #3 in 200free and 400IM in any combination. It looked like a given but hasn’t materialized: she missed podium in both cases.

I think the point you are missing here is that Ledecky scratched. Given that, Leah would be the top seed by 5 seconds. Seems odd to throw away a pretty good shot at 10k and a BMW as a pro swimmer.

$7 million dollars is a lot of money, jeez.

$7 million for 7 years contract. Think of it like this student has $1,000,000 yearly income then it becomes even more impressive or I would say beyond comprehension for the people like me. $10,000 will be 1% in this case. That is how it should be looked at. Should she ignore this earning? I think it would be unprofessional. If it doesn’t hurt her image (that costs a lot) or could be an obstacle for bigger goal she shouldn’t ignore earnings no matter how small they are compare to her income. These prizes are what we are dealing with in swimming now and it will be unethical to demonstrate that it is peanuts to her.

I’m not downplaying it, just showing that it *should* be a much bigger sum.

There’s really no incentive for USA Swimming / sponsors to increase it, because what are the swimmers gonna do, not show up!? Ha! Laughable.

True, and it wouldn’t look good for her suit sponsor, TYR, who I assure you spent a lot more than $10,000 on sponsoring the PSS, to have their biggest star say “meh, not that important.”