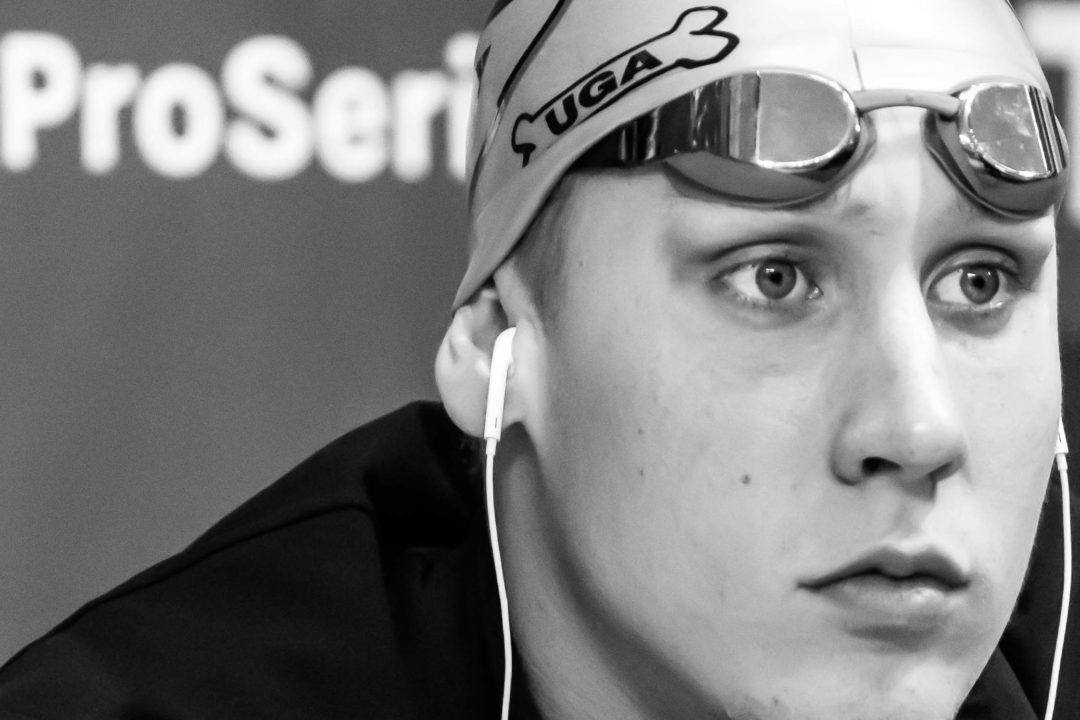 Both Chase Kalisz (above) and Leah Smith enter US Nationals with leads, though they're not insurmountable ones. Archive photo via Mike Lewis/Ola Vista Photography

Devon Nowicki of Michigan Lakeshore Aquatics really took out the final hard, actually beating Michael Andrew to the 50m wall in 27.43 to Andrew’s 27.4

After the final stop of the 2018 TYR Pro Swim Series, and the second-to-last meet to earn points for the series’ overall prizes, Chase Kalisz and Leah Smith each took leads for their respective genders. Now they’ll have to hold onto those leads at U.S. Nationals, where the points are doubled in the race for the $10,000 cash prize plus a one-year lease on a BMW.

While it’s unlikely that the PSS title will take precedent at Nationals for any of these athletes over making the Pan Pac team, the reality is that most of the contenders should be able to qualify for the team early – and because at Pan Pacs, athletes can then add any individual event, the chance to chase the series title opens up.

The exception to that is relays. With no prelims, there’s not as much wiggle room for coaches to massage swimmers onto relays who weren’t in the top 4 (or 1st in the 100 yard races). Most of the contenders, with the exceptions being Kelsi Dahlia and Katie Ledecky, have their best relay shot in the 200 free, which comes in the first finals event on day 2 of the meet, so that pressure is off once that event is completed.

Chase Kalisz held a 2 point lead coming into Columbus, and he picked up 20 more points with a thick event schedule to just 15 points for Grothe. That means Kalisz now has a 7-point lead heading toward Nationals.

Grothe swam 3 events at Nationals last year, with the 1500 possible as an add-on for him this year (downside being that the men’s 1500 comes on day 1 of the meet, although just as a timed final).

So, while Kalisz does have a lead coming into Nationals, and is capable of a top-3 finish in as many as 4 or 5 events, the double points mean that this race is still very-much in-play for Grothe, if he goes after the 1500.

While the men’s race has two swimmers running away (swimming away?) from the field, the women’s race is wide open, with the specter of Katie Ledecky, who didn’t swim in Columbus, lurking in 5th.

There are no guarantees in swimming, just as there aren’t in any sport, but at the moment, it appears as though Katie Ledecky can count on wins in whichever among the 200-400-800-1500 she chooses to swim at Nationals. Remember, though, that she didn’t swim the 1500 at Worlds Trials last year, knowing that by the selection standards for that meet, she was already guaranteed a spot in the race at the World Championships.

For Leah Smith and her current 11-point margin over Ledecky, that would mean she’d have to find herself 19 points at Nationals to tie Ledecky, and 20 points to win.

For Smith, based on her Nationals schedule last year, that could look something like:

That comes out to 38 points, which would be enough to fend-off Ledecky and take the title.

So, event selection, as much as performance, probably determines the women’s winner. The more interesting scenario is if Ledecky doesn’t swim the 800 free, avoiding the day 1 double, but picks up the 400 IM, where earlier this year she set records in yards, and on a day where Ledecky has no other events scheduled. That would make Smith the favorite in the 800 free, and if all of the races went to chalk, then that 400 IM would effectively be the ‘race for the title,’ – a $10,000 skins race.

The swimmer 1 point behind Smith, Melanie Margalis, is versatile and has a chance to play spoiler; but she only swam 3 races at Nationals last year. Those 3 races netted her a win and a 3rd-place finish, which would be good for 12 points if repeated. That doesn’t appear to be enough.

Kelsi Worrell will be the favorite in the 100 fly, and a contender in both the 50 and 100 frees, but that doesn’t provide an obvious path given Smith and Ledecky’s relative and mutual dominance in the distance races.

There can, and will, be surprises. There’s nobody mathematically close enough to interject into the Kalisz/Grothe battle, and Smith and Ledecky seem to have a lock on the top two spots for women. Spoilers, who aren’t contending for the title, could still come into play. A young swimmer like Andrew Abruzzo could pull an upset in the 800 free; Melanie Margalis or a suddenly-quiet Madisyn Cox or NCAA Champion Ella Eastin or the on-fire Hali Flickinger could upset the apple cart in the 400 IM and redo all of the math.

Or, Ledecky could decide to swim 5 races, and just steamroll her way to the title.

That’s the fun of it, though – while many swimming races seem foregone conclusions before they start, there are surprises and breakthroughs at every National meet, and that’s what keeps it fun.

What about Leah possibly doing 2 fly? I remember her mentioning she was considering it

She has stated she wont be swimming the 2fly

I am all in on the women’s point race LETS GO!

Wow! You take that very seriously!

It will be interesting to see if they swim events that will be best for Pan Pacs or for the BMW? I don’t think Katie swims 1500 at nationals….you can enter anything once you qualify. Same thing for Leah…I don’t think she will swim everything at Nationals. Will Margalis swim 4im and or 2breast? I say no to the 2breast. Katie can buy 100 BMWs so don’t think it will be motivation for her.

She doesn’t have to swim either but you make a keen observation. I haven’t looked at the Order of Events for either meet (or Worlds).

It is not a question of if she can or cannot buy. It is a question if it worth to do based on her approach to her professional career.
Recently We have two polar examples of running pro swimming business:
Katinka Hosszu, who’s swum everything when it smelled easy money
And Missy Franklin who’s swum nothing.
Surprisingly both businesses models were successful.
I think that Katie Ledecky will prefer not frequent but big game in her money hunting

Margalis has a great breast and free. Eastin gets ahead on the fly and back but Margalis can catch up on breast. andwin on free. Smith is a great freestyle and so is Ledecky.

As a training meet swimming a lot would work for KL. High quality races with some pressure can show things that cruising can’t. She might go that way with 2 years to go until it really matters

Zane all the way…