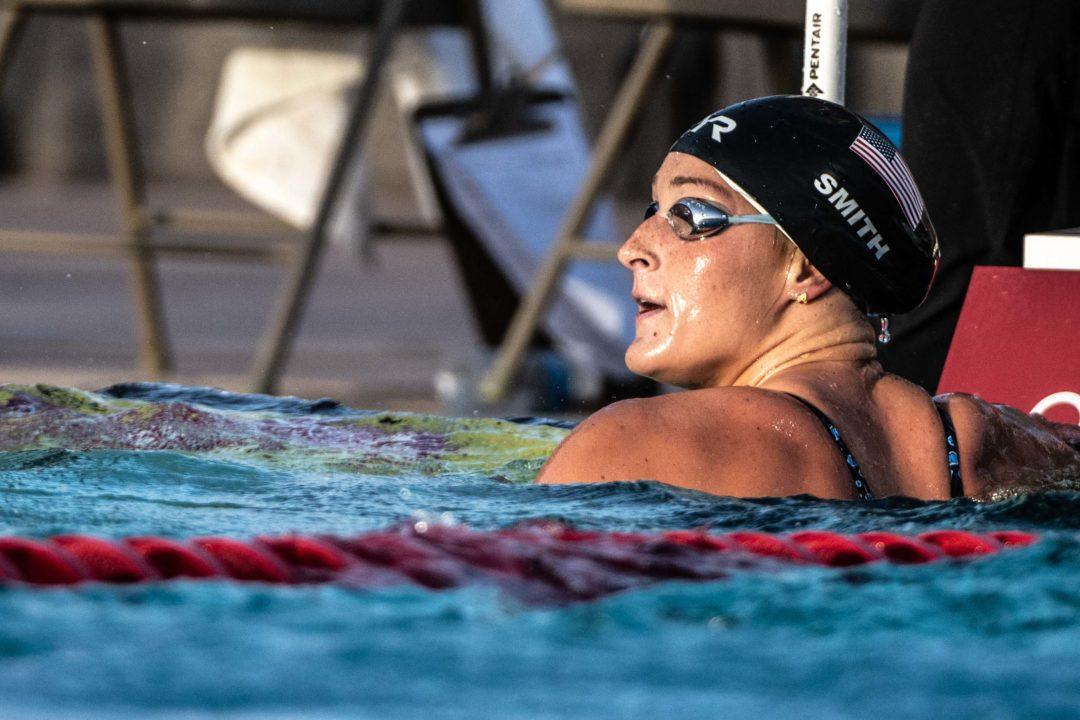 The six-event series itself is over, but U.S. Nationals will serve as the final PSS scoring event later this month. Smith surged past three inactive swimmers in Columbus: former leader Melanie Margalis, Canadian Taylor Ruck and Olympic champ Katie Ledecky.

Smith leads Margalis by one, Ruck by two and Ledecky by 11, with Kelsi Dahlia also passing up Ledecky. Ledecky should be very likely to score 40+ points at Nationals, though, with wins likely in the 200, 400, 800 and 1500 frees, assuming she swims all of them. Smith has a shot to score in all of those along with the 400 IM (which could also be a scoring event for Ledecky). Margalis indicated she’d rather not swim the 400 IM at Nationals, but would be a likely scorer if she does. Otherwise, her 200 IM and 200 free could rack up points, along with perhaps one or both breaststrokes.

On the men’s side, Kalisz and Grothe were at one point tied, but Kalisz opened up a two-point lead through the middle of the series and expanded it to 7 points in Columbus. The two are so far ahead of the field that no one else is in contention for the $10,000 or the BMW lease. Kalisz is likely to win the 200 IM and 400 IM at Nationals, with scoring chances in the 200 fly and 200 breast, if he swims them. Grothe should score in the 400, 800 and 1500 (again, provided he swims all three) and could also score in the 200 free.

Here’s the top five for men and women heading into Nationals:

Okay don’t roast me but why wouldn’t katie and leah swim for 1500??

Pan Pacs qualifying is weird. Unlike most meets, once you’re on the team, you can theoretically swim as many races as you want at Nationals. So, as we’ve seen before, it’s possible for athletes to focus on a smaller schedule and just worry about ‘making the team’ (and relay spots) and then expand their lineups for Pan Pacs.

This is why, when you look through past Pan Pacs rosters, you wind up getting some new faces on these teams that you don’t see on other “Operation Gold” rosters.

Because they are both guaranteed to make the team in other events and at Pan Pacs you can enter as many events as you want, even the ones you don’t technically “qualify” for. It won’t be worth it to them to race a 1500 at the end of a long meet (nationals) when they can just race it at Pan Pacs where they will be racing for medals. Their times at Pan Pacs will also be able to qualify them to race it next year at Worlds.

The 1500 for women is on the final day – thus no conflict for either Smith or Ledecky; Likewise the 400 IM is on a day where there are no other events that Smith or Ledecky would likely swim. The only apparent conflict for either is day 1 where the 100 free and the 800 free will both be swum. The 800 is after the 100, so if she wanted, is there any doubt that Ledecky could come back and swim the 800 and still win? If Ledecky wants the prize, its there for the taking for her, If she passes up some events and Smith swims a max schedule then things get interesting. Of more interest will be what… Read more »

If there would be no Chinese girls then the only competition Ledecky may have at Pam Pac would be in 200 free against Ruck and Titmus. So as you said it’d better to be fresh at this race. On the other hand the swimming 800 at the beginning of the evening session on cruise control around 8:13 – 8:15 is enough for the win and won’t hurt her. She was 1:54.6 in Budapest after swimming same night 15:31in 1500 final. But, we all know what followed next day when she wasn’t able to break 1:55
Let’s see what decision she makes.

The situation in women TYR competition is actually very interesting. If Katie Ledecky swims four events she will be uncontested winner of $10000 bonus and BMW lease with 76 points. Since she isn’t required to swim four events she may limit her program with three events only and in this case she will have 66 points.
If Leah Smith swims 200-400-800 free and gets successful to be #2 she will be awarded with 18 points totaling 65 just one point behind Ledecky.
So if these two pros are up to $10,000 and BMW and adding to their resume the win of TYR competition they have to think about fourth event where they have chance to medal just for… Read more »

I’m almost positive Katie will swim 4 events, however, I think the fourth will be the 100 free. She has to prove that she should be on the relay, which means swimming the 100 free at nationals. However, I don’t think she’ll be top 3 in that based on Manuel, Commerford, Neal, etc.

^^^what swimswamswum says. I think she’ll swim 4 events at Nationals, and think about adding more at Pan Pacs. Remember, no prelims relays at Pan Pacs, so its 4 that go. If it were 6, she could count on a chance to prove herself in prelims, or just being handed a spot, but with the improvements being shown all-around by US sprinters, she probably needs to be top 4 at Nationals to get a spot.

I could see a more likely “3 event” scenario being skipping an individual race to focus and make sure she gets that 400 free relay spot.

But, being Ledecky, most likely scenario is that she just swims a bunch of races. She’s never been afraid… Read more »

I would predict that Leah Smith will swim the 200-400-800 free and the 400IM while Ledecky will swim the 100-200-400-800 free, but I wouldn’t be shocked if they add an additional event. Most likely the 1500 free for Leah and the 400IM for Ledecky, but I don’t think it’s likely that either will happen. Ledecky doesn’t really have any reason to swim the 1500 free at nationals, and the same pretty much goes for Leah as they will both probably only swim it once this summer and would chose Pan Pacs over Nationals.