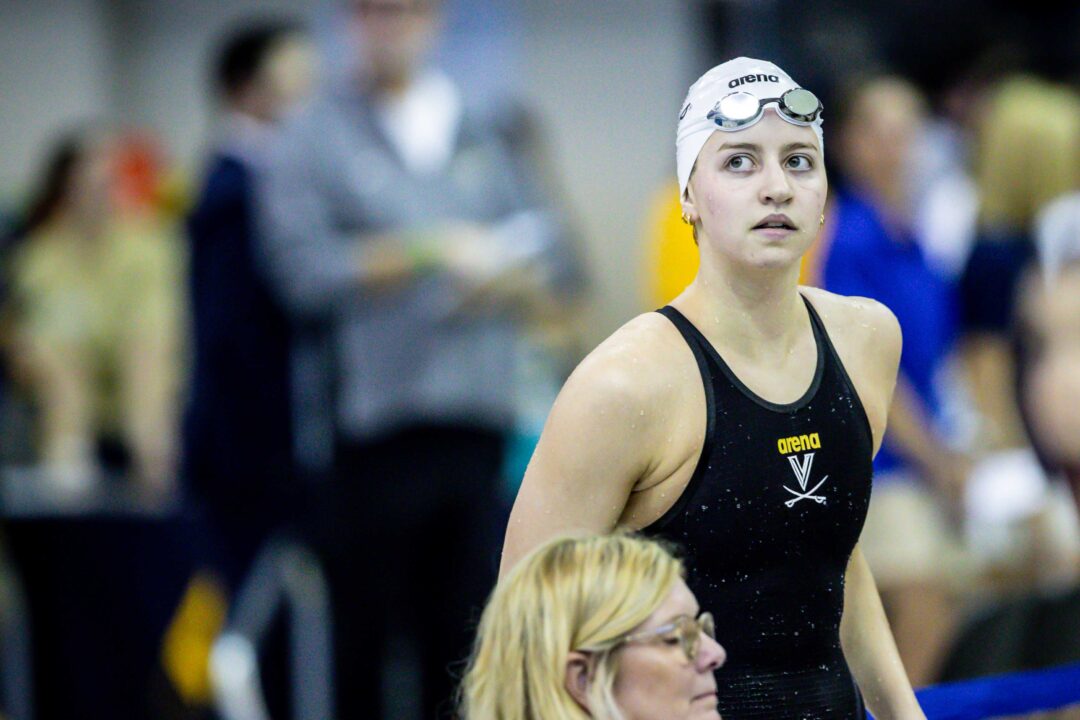 Kate Douglass' 52.73 in the 100-yard IM from Saturday was the second-fastest in the history in the event, just trailing her 52.48 from 2020. Archive photo via Jack Spitser/Spitser Photography

On Saturday, Virginia senior Kate Douglass swam a time of 52.73 in the women’s 100-yard IM at the UVA Blue vs. Orange intrasquad meet. That time registers as the second-fastest of all-time in the event, just trailing the 52.48 she swam at the 2020 UVA intrasquad as a sophomore. It is also only the second recorded women’s 100 IM under the 53-second barrier.

Finishing second behind Douglass was her teammate and domestic 200 IM rival Alex Walsh, who clocked a 53.73—the sixth-fastest time in history. She won the 100 IM at last year’s edition of the UVA intrasquad in a time of 53.08, which is currently the fourth-fastest time ever.

The 100 IM isn’t typically contested at major college meets such as conferences and NCAAs, but it is an official NCAA event. The biggest yards meet that offer the 100 IM is the NSCA Junior National Championships, although the short course meters edition of the race is part of the event program at both the FINA Short Course World Championships as well as the ISL.

*verifying times for an event not typically raced at official meets is difficult, so if you know of a swim we missed, please let us know in the comments.

Douglass touched at the 50-yard mark in 24.67, just 0.01 seconds ahead of Walsh. However, she outsplit Walsh 28.06 to 29.06 on the finish, which accounts for the majority of the gap between the two swimmers. This makes sense considering that Douglass’ weakest stroke of backstroke comes in the front half of the race, wheras she is strong in both breast and free, which make up the back half of an IM.

Best event in swimming. Everyone knows Grevers the GOAT.

Not sure there will ever be a female equivalent

do you know what nuance means?

You…. Are the worst

Put the 100IM back into conference meets and NCAA champs, you cowards!

Best event to watch and swim

Doug killed the free leg of the 100 IM

Didn’t they soon the 1IM before NCAAs? Up to 1982? Wonder what times were then?

In fact, they swam it at the first NCAA women’s championship in 1982, where none other than Tracy Caulkins won. Her time was 55.74.

They never swam it at the men’s NCAA Championship meet.

This is the content I’m here for. That is a fantastic tidbit.

For sure. And Tracy was the Kate Douglass of her era.

I would guesstimate that Kate would be capable of around 51.0-51.3 if she swam it at the NCAA Championships this year.

And Tracy was the Kate Douglass of her era.

see my note about it in the full meet recap: Douglass had a cramp mid-race.