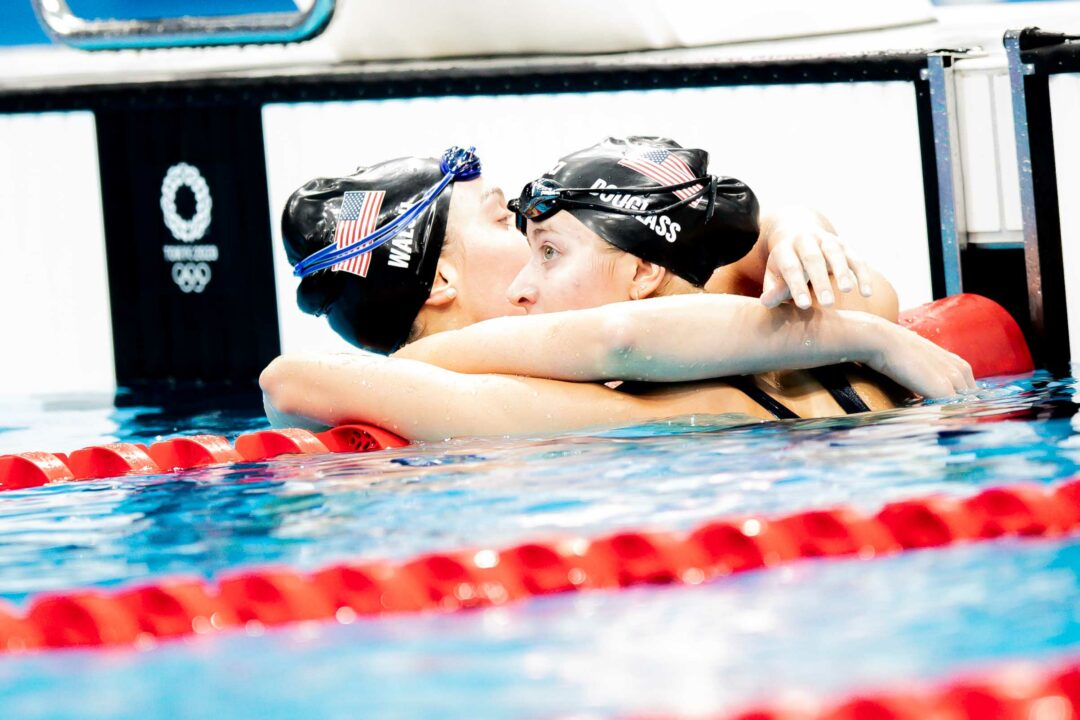 The Virginia Cavaliers got their season underway with the annual Blue vs Orange intrasquad meet, and fans were treated to some fast October times. Archive photo via Jack Spitser/Spitser Photography

The UVA women don’t appear to resting on their laurels after securing the program’s first-ever NCAA Championship this past spring. Just a few weeks into fall training, the Cavaliers put up some impressive times at the annual Orange-Blue intrasquad meet this morning in Charlottesville.

We’ve watched Kate Douglass throw down fast times all season long for the last two years, and this year started off no differently, as the junior smoked a 21.48 to win the women’s 50 free for the Blue Team. Freshman Gretchen Walsh touched just behind her, in 21.63. Those time would’ve finished 4th and 6th, respectively, at the 2021 NCAA Championships. Douglass won that event with a 21.13. Earlier in the meet, both women anchored their class’s mixed medley relays with sub-21 free legs; Douglass split 20.90 and Walsh 20.95.

The Orange team got multiple victories from several swimmers. Emma Weyant, who earned a silver medal in Tokyo in the 400 IM before arriving at UVA as freshman this semester, swept the distance freestyles with a 5:45.49 in the 600 free and a 2:45.78 in the 300 free.

Sophomore sprint star Matt Brownstead swept the shorter freestyles. He won the 150 with a 1:08.95, over a second faster than Blue’s Matt King, who transferred in from Alabama after also sizzling in the sprint freestyles as a freshman last season. The two again went head-to-head in the 50 free, and Brownstead won that too, 19.75 to 19.89. Brownstead didn’t swim the 50 back individually, but his 21.7 leadoff from the mixed medley relay was faster than the winning time in that event.

Alexis Wenger won the women’s 50 breast in 26.97. Accounting for the differences between a flat start and a relay start, that time essentially matches the 26.41 split she had at the NCAA championships on the 200 medley relay, and isn’t too far off her scorching 26.03 relay split on the relay that set the US Open medley relay relay record at ACCs.

The meet actually began with a 200 mixed medley relay where the relays were grouped by classes, and not Blue/Orange. Here’s a full list of results from that event:

Shocked? Why? Now we will see some competition!

Hot take Daniel Worth is going to be top 8 at NCs this year.

0
0
Reply
Beast from the East
Reply to  Daniel Worth

23.5 relay split as a senior in high school

So they’re basically going their ncaa-meet times … on October 2. 👀👀

Why is this strange to anyone at this point. They don’t overtrain, they train to be fast all the time. When they put on suits they go really fast.

While your larger point stands, they’re still only 5 weeks into countable days. It is crazy to be this quick first weekend of October.

They don’t think (or train) with that limitation which is why they can do this. Everyone on this team trained all summer. You don’t lose fitness in three weeks.

not fitness, but feel for the water for sure. it is definitely very impressive that they are going bests in October. They’re in their 20s, not 12 year olds that pop best times at any meet

Not really, considering the athletes we are talking about, plus, year over year times are getting faster! Watch times 5 years from now. They are learning and training differently then 10-15 years ago and diet, supplements.

Douglass going 21.4 is 0.5 off the Am Record. That’s the equivalent of a guy going 18.1 in an October intrasquad. If you’re not impressed by that, that’s on you.

21.4 is WILD for this early in the season, but i don’t think you can compare times like. I mean no disrespect to Weitzel, who is a phenomenal swimmer, but I don’t think its fair to compare her and Caeleb’s record. Caeleb has been shown to be the best textile sprinter in all courses while Weitzel is still quite a bit behind Ranomi’s SCM record.

She was also 21.4 last fall in November. It’s an elite swim because she’s an elite swimmer. This nonsense that you can’t be fast in the fall needs to stop though. It’s been proven that with modern training you can be fast whenever you want.

Seems suspicious. Will see what they do at the Cal meet…

honestly the both can go after abbey’s 50 free SCY record. but from my original comment i was more alluding to the american record for SCY since spoiler alert… we’re the only country to do SCY

I just know that, I am going to save by switching to geico! Hey now

That was the NCSU won, right? Go Pack!

Did Alexis Wenger go 25 in the BR for the relay? That is crazy fast but they listed three women. I am guessing that was someone else but if Alexis is throwing 25 relay splits to start the year, that is huge for UVA along with some many other swims that were crazy fast.

It is correct. Only one 4th year male (Casey Storch) was present on Saturday morning. Justin Grender swam his times in advance. There were 3 women on the 4th year relay. FYI: 2 men who would have been in this 4th year class graduated a year early, and are retired from swimming but working on graduate degrees at UVA. Todd’s 1st recruiting class (which he didn’t start recruiting until mid-August before their HS senior years) also had one transfer out after one semester and one stop swimming after two years.

How many dolphin kicks this time?

Were they suited up? Either way those are some quick times.

They were obviously suited up. Come on now.

They’re both listed as freshmen on the official roster. Beyond that, not sure about how they ended up on their respective class relays, assuming we got the correct names.

Probably their committed classes. Weyant was committed to class or 2020 and Tiltmann 2021.

Also I believe Weyant redshirted rather than taking a gap year

yeah she most likely red shirted