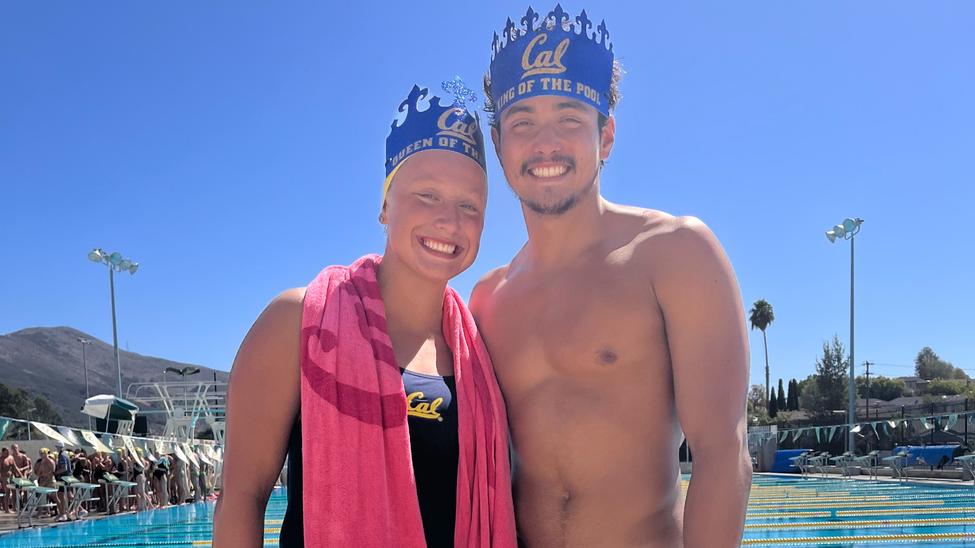 Cal vs. Cal Poly King & Queen of the Pool

The Cal Golden Bears enter the 2022-2023 season with a very different look, racing for the first time as a combined program under Dave Durden, but the opener gives a feel of familiarity. As they’ve done every season since 2009 (aside from the pandemic year), the Golden Bears headed south down the coast to San Luis Obispo for a September King and Queen of the Pool meet.

This year, juniors Destin Lasco and Isabelle Stadden were crowned the new King and Queen, respectively. They took over the titles from Hugo Gonzalez and Isabelle Ivey: two swimmers whose potential 5th years at Cal are still hanging in the balance (though the men’s team has included Gonzalez in its season previews).

The event is a classic pentathlon, with swimmers racing 100 yards of each stroke plus a 100 IM—the swimmers with the lowest total time win.

King of the Pool

Lasco, traditionally a backstroker and IMer, won with a combined time of 4:04.23: a whopping 8 seconds faster than any other Cal swimmer.

Gonzalez wasn’t the only Golden Bear missing from this meet on the men’s side. In fact, several of Cal’s top swimmers were absent. All-Americans Reece Whitley, Bjorn Seeliger, Liam Bell, and Gabriel Jett, were all absent from the meet. That left sophomore Robin Hanson in 2nd place, more than 8 seconds back.

Lasco had the best split of the field in the 100 IM, 100 free and the 100 back, with the latter being his specialty event.

By comparison, Leon Marchand, the defending NCAA Champion in the 200 IM, swam 3:53.31 at Arizona State’s intrasquad pentathlon last week. Lasco would have placed 4th at that meet.

This is Lasco’s first King of the Pool meet; the event wasn’t held in his freshman season, and he didn’t participate last year.

The runner-up this year, Hanson, was 1.20 seconds faster than he was in this meet last year, with the biggest improvement being obvious in a second-and-a-half drop in the 100 breaststroke. Hanson had the best fly split of the event in 48.41.

Cal sophomore Jacob Soderlund had the top 100 breaststroke split in 55.07, part of a 26th-place overall finish. That is two seconds faster than the time that he swam at this meet last year.

Cal Poly’s top finisher was Kieran McNulty, who placed 23rd overall in 4:26.08. Brian Wong, who was 15th overall last year for Cal Poly in a time of 4:23, didn’t compete this year.

Queen of the Pool

In the women’s meet, it was another junior backstroker, Isabelle Stadden, who won in 4:39.05. The battle was much more competitive on the women’s side: she was just 1.73 seconds better than runner-up Ayla Spitz (4:40.78).

The win was a massive improvement for Stadden over last season, where she placed 3rd in 4:47.11 – over 8 seconds slower than she was this year, and perhaps an early indicator of the impact of the team’s new coaches in Dave Durden, Dave Marsh, and Jesse Moore.

Stadden’s improvements were across the board, but especially important in her primary backstroke event. Last year, she swam 53.45 at this meet, while this year she swam 52.82.

She showed even bigger improvements in her secondary strokes, which could spell good things for her 200 IM. She finished 22nd in that event at the NCAA Championships last year, as compared to A-final swims in the two backstroke races.

For a national comparison, Charli Brown won Arizona State’s pentathlon in 4:35. Stadden would have finished 2nd there.

That swim for Riley, a second-and-a-half better than she was at this meet last year, is a welcome sign for Cal. Without knowing what the future holds for Ivey, and with Elise Garcia gone on a transfer to USC, the Cal sprint group will be looking for bodies this season. Emma Davidson, another part of the group trying to step up there, swam 51.98 for her part.

King of the pool is the best practice of the year

Is Mia Kragh still at Cal?

Yes – she was in SLO with the team this weekend per the team social media stories.

@Braden Keith, out of topic but olympic champ Ahmed Hafnaoui isn’t listed on the 22-23 IU roster that has just been uploaded.
The coaching staff confirmed to you last week that he’s there and it looks like he’s not.

Can you please investigate a little bit more into this topic?
Maybe he doesn’t want to swim in the NCAA anymore. 🤷‍♂️🤷‍♂️

We did this in practice suits from a push over the course of a 60 minute masters practice this week in my second practice back after I took a one month break.

Using a formula to compute scores from the race times (rather than just a summation of the times), it’d be very fun to watch a program do a meet like this where each swimmer has to strategize how to distribute multipliers to each race’s score ahead of time. Suddenly this becomes a very different contest. Something like:

Basically, each swimmer picks the order of the Fly, Back, Breast, and Free worth 9x, 8x, 7x, 6x prior to any racing.
I feel a 5-4-3-2-1 system rewards the non-versatile swimmers a bit too much.

If you’re going to compare the results to ASU, it’s worth noting that they suited and these teams didn’t. No one would touch Marchand regardless, but some of the other times would have been a little more competitive.