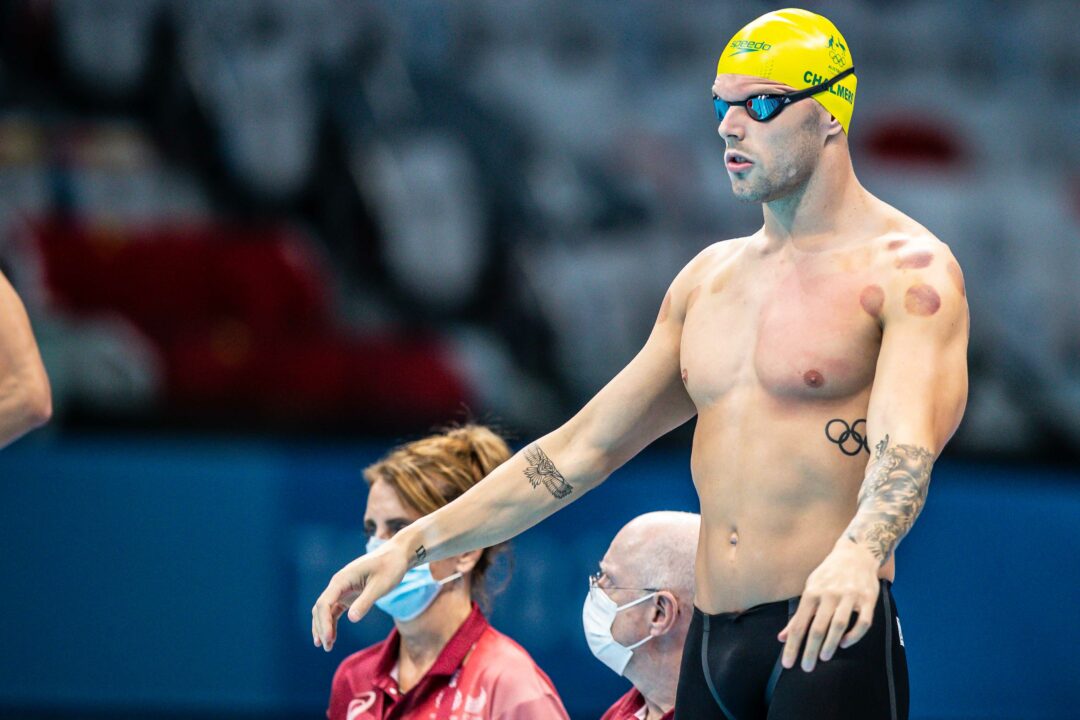 "It’s just about how long my body and mind hold up for, really," says Olympic champion Kyle Chalmers as he reveals his short-term swimming goals. Archive photo via Jack Spitser/Spitser Photography

Australian Olympic champion Kyle Chalmers is coming off of an up-and-down summer.

Yes, the 24-year-old took home 4 medals from this year’s Commonwealth Games, including individual gold in the men’s 100m freestyle. But, the Adelaide native was also subject to a media whirlwind surrounding his relationship with fellow Aussie Olympian Emma McKeon and her new beau Cody Simpson.

Additionally, the Australian media was quick to paint Chalmers as a villain for reversing his decision to compete at the 2022 World Championships, resulting in the ace taking the spot of Simpson in the men’s 100m butterfly event.

The stress and attention nearly caused Chalmers to throw in the towel, as he said at the time, “Up until this point I’ve tried to just keep on moving forward but tonight I ask that you please stop writing these false headlines otherwise my time in the sport will be finished. I don’t swim for this, I didn’t get into the sport to have to deal with this. I swim to inspire and I swim because I love my sport and it gives me purpose.”

Flashforward to the present and Chalmers is finding himself in a much better place, back home in Adelaide with his parents and his familiar roots.

“Adelaide is as easy as it comes. I’ve got everything I need here. I love it here; it’s like a big country town, all my family and friends are here and couldn’t make it any easier if I tried,” Chalmers told The Herald Sun this week.

“Eventually I’ll move home to Port Lincoln and live a more chilled lifestyle. For the time being Adelaide is home and I love it here.”

As for Chalmers’ mindset in the pool, his killer instincts are still alive and well, with the goal of further making his mark in his specialty event at the forefront of his aquatic vision.

Looking even further ahead, Chalmers said, “Then I have a crack at world long course and if I can go out with a bang in Paris and do well there, I can have a pretty successful career to look back on and be pretty content and happy that I’ve achieved everything I wanted to and set my sights on.” (The Herald Sun)

Despite these specific goals, Chalmers approaches his training with a relaxed stance, especially given the multiple heart and shoulder surgeries this champion has undergone.

“I just take it as it comes. My body could give way tomorrow so it’s a hard thing to gauge.

“I’ve formed a very good relationship with the pool that I think is the greatest form of meditation for me – when I jump in and just swim, with no coach and no pressure and just swim for fun,’’ he said.

“Swim a kilometre maybe and in my own mind I’m just zoned out to the world.

“It’s probably my safest place and it’s my greatest form of meditation these days and something I try to do even while I’m on a break.”

He continued, “I’m definitely in a good place with swimming. My body is the best it’s felt in a really long time.

“Let’s see how everything pans out. It’s a very high stress, high intensity, high pressure sport – it’s just about how long my body and mind hold up for, really.”

The 2022 FINA Short Course World Championships are scheduled for December 13th-18th in Melbourne, which means we may see Chalmers tackle his first goal of a short course world title just two months from now.

Among his rivals is relative newcomer David Popovici of Romania. After making two Olympic finals in Tokyo at the age of 17, Popovici took 100m and 200m freestyle gold at this year’s long course World Championships.

He then stunned the world with a new world record in the long course 100 freestyle at this year’s European Championships, firing off a historic 46.86 to overtake the longstanding mark of 46.91 Brazilian Cesar Cielo put on the books 13 years ago.

Popovici has said he will be competing in Melbourne, giving us a potential head-to-head battle between 2016 Olympic champion and 2020 Olympic silver medalist Chalmers and this fearless teen who shows no signs of stopping.

As great as Popovici was this summer, he shouldn’t pose a serious threat to Chalmers (by the way, he had already gone 47.30 when he went 46.7 last fall). Short course swimming is a completely different animal than LC swimming, and Chalmers’ start and underwaters are significantly better than Popovici’s right now.

Prediction, if both guys face off later this year:

Chalmers: 45.43 (he clearly won’t be as good as he was in late 2021, as he actually peaked after the Olympics)
Popovici: 46.25 (I think Popovici will end up getting 3rd or 4th overall, as he has shown nothing in terms of SC prowess thus far)

Gonna be tough with DP around

Brianna Throssell also moved across country from Western Australia to Brisbane. I *think* she will be joining up with Boxall at SPW.

She has been on the Sunshine Coast for a while