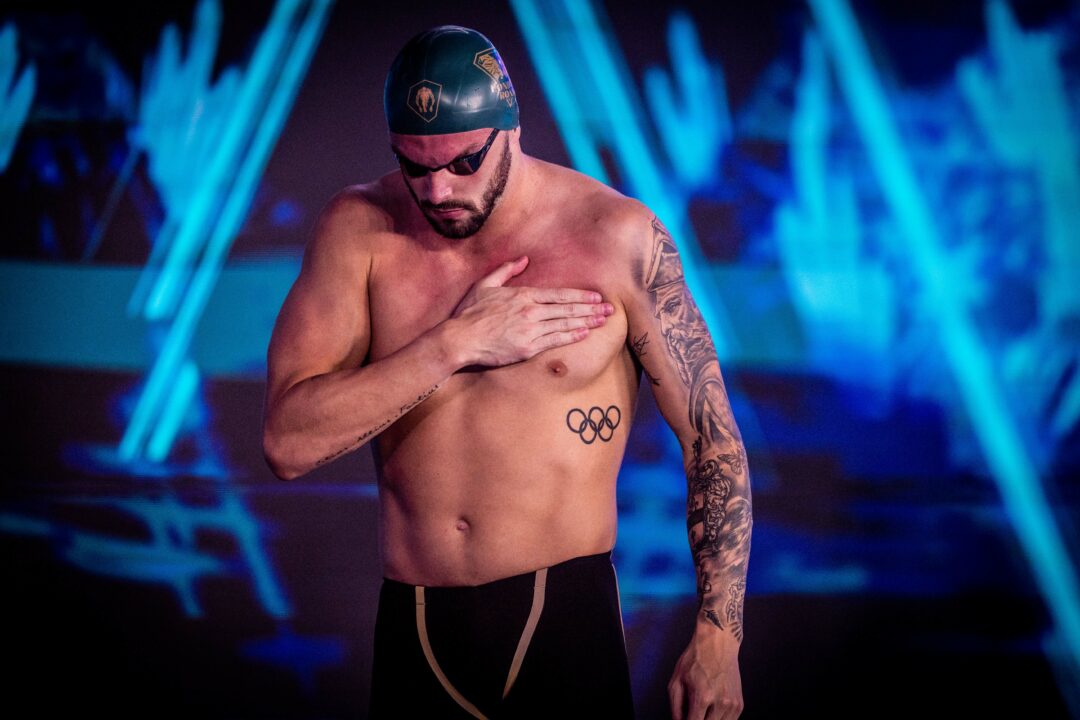 Olympic gold medalist Kyle Chalmers came to Australia's Championship meet with low expectations, but a 2nd-place finish in the 100 fly has him reconsidering his plans. Archive photo via Mine Kasapoglu/ISL

Chalmers told SwimSwam in an interview in March that he would “most likely” miss the 2022 World Championships to focus on the Commonwealth Games, along with many of his highest-profile Australian countrymates.

After finishing 2nd on Wednesday in the 100 fly in a time of 51.67, however, he told SwimSwam that he was reconsidering those plans.

“I’ve been back in the pool 7 weeks now, I had no expectations on making the Worlds team, especially in butterfly,” Chalmers said. “So am now weighing up what’s going to be best for me and my preparations for Paris. (My) shoulders are feeling good, mind is feeling good, so wouldn’t mind being a part of the team.”

That time by Chalmers is the second-best of his career and only the second time that he has been under 52 seconds. His best time is a 51.37 from March of 2020, just before the world shut down with the onset of the COVID-19 pandemic. Chalmers told Australian media earlier this week that he was dropping the 200 free from his program “altogether” to shift to the 100 fly as a third event, alongside his primary races the 50 and 100 freestyles.

He got that and more, finishing behind the incumbent in the event and Marion training partner Matthew Temple (51.50) and ahead of swimmer-turned-popstar-turned-swimmer Cody Simpson (51.96).

Simpson’s finishing place set local media aflutter at the possibility of such a high-profile personality qualifying for the World Championships. Even if Chalmers decides to go to Budapest next month, Simpson’s 3rd-place finish still gives him a spot on the Commonwealth Games team.

Chalmers has had a number of health issues in his career, including a pair of surgeries, one on each shoulder, in the last two years.

Chalmers is already pre-selected to the Australian roster for the Commonwealth Games in the 50 and 100 freestyles by virtue of his performances at the Olympic Games. Australia did not award preselection for the World Championships this year. Chalmers is only entered in the 50 and 100 fly for this week’s Australian Championships, which means he is not eligible to swim the individual 50 or 100 free at the World Championships if he does decide to go, in spite of his silver medal in the 100 from Tokyo.

Cody obviously had tons of media training during his musician days, but you can REALLY feel his love for the sport, excitement about how much progress he has made, and how at home he feels in the swim family. And yes he very graciously addressed the Worlds/Kyle situation – “He has the spot. I didn’t finish second, I finished third.”

Maybe he wants to go to continue training with his coach.

I think people are overcomplicating it. I think the reality is that he always wanted to go, he just didn’t think he had enough runway to get there after his latest shoulder surgery (7 weeks ago). He surprised the heck out of himself, and now wants to go with his boys.

This feels like his “Eleanor,” and now he’s chuffed to go to Budapest with the boys.

I agree this is probably it, but I think it’s probably a cultural thing that non-Aussies don’t fully get.

I love me some Kyle. I sing his praises constantly. But he didn’t say “I don’t think I’ll make the team because I’m not prepared so we’ll see what happens and if I qualify I have some decisions to make”. He was very explicit in saying for months he definitely wasn’t going. Aussies do not like someone who backflips on a position when they find out it will benefit them more (ironically our federal election is tomorrow and that’s what our politicians love to do).

I’m not going to hold it against him if he goes, but I understand why people… Read more »

Yeah, it’s not really looking good on him

While I respect Chalmers as a competitor, even on the Amazon documentary months ago he was discussing his shoulder injuries. Cody Simpson and Instagram drama aside, he would be better off resting if he wants to make it to Paris. Maybe hang out with his reptiles and enjoy some R&R.

That documentary is over 12 months old.

I would be happy for Cody Simpson if he makes an international team, but I’m glad he didn’t make it to the Olympics on his first try. If he just up and qualified, people would think it’s easy. And you gotta save the spots for those of us who aren’t good singers, dancers, or attractive.

Wow. Sub-52 is legit. Cody is making real strides. Good on him for pursuing his lofty goals!

I remember watching a video of him going 51 in yards just a couple years ago when he first started his comeback. Amazing to see how much he has progressed.

Cody is hardly a medal chance at Worlds, Kyle can go very fast on a limited prep or have you forgotten his heroics in Tokyo already, Go Kyle!🇦🇺🦘🇦🇺

Cody isn’t a medal chance, maybe a final chance if he has a very good day

I get the feeling that kyle has a problem with simpson, to start with the obvious in the instagram stories covering it up and then all those rumors that cody started dating mckeon (which if we remember it was rumored that he was with kyle at first )

I get the feeling lies spread a lot faster than the truth especially with the Australian press!

Have to agree on that, the McKeon/Chalmers thing came out of no where last year from Sydney morning Harold and Fox with no actual evidence apart from the fact they were photoed standing next to each other when the team was announced for the olympics. It was just a load of crap from the media cause neither of them confirmed anything and even during isl spent time with others and did nothing together. And because of that whole situation people are thinking Kyle is trying to get back at Cody when in reality he’s just had a good swim shocked himself and rightly so wants the spot he earned for worlds