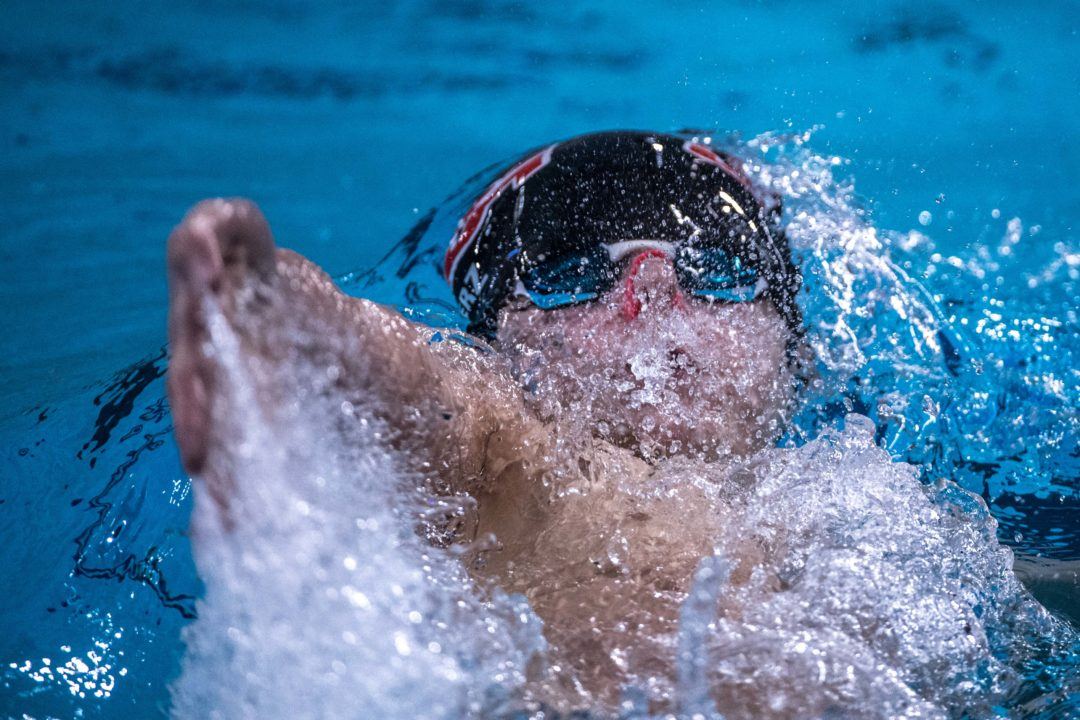 The finals of the 4A Colorado High School State Championships was a dramatic session, as the Discovery Canyon and Greeley West boys came in separated by 2 points after prelims.

It was expected to be a tight battle between the two teams, until a costly infraction sent the Discovery Canyon boys out of contention. While results show the team won the 200 medley relay (1:33.62), the CHSAANow recap revealed that 2 swimmers jumped into the pool post-race, causing a disqualification. The Windsor boys were the next-fastest team with a 1:34.28.

After the sudden disqualification from the 200 medley relay, Discovery Canyon freshman Quintin McCarty gave his team their first win of the meet in the 50 free. McCarty broke the 21-second barrier with a 20.90, touching out Pueblo County’s John Plutt (21.10) by two-tenths. Plutt later won the 100 fly with a sub-50 second swim of 49.51.

In the remaining two events, Greeley West secured great points that carried them to the end. In the 100 breast, sophomore Baylor Lewis finished in 3rd place with a 58.85. Lewis finished behind Cheyenne Mountain’s Gabe Grauvogel (58.07) and champion Joshua-Ryan Lujan of Pine Creek (56.99).

With the final scores, Greeley West won their first-ever state title with 323 points. If Discovery Canyon’s 200 medley relay would have been legal, they could have won the meet. However, the team settled for second with 307 points.

Had the race been completed when the swimmers reentered the pool?

Yes. There’s a rule that states that competitors may not re-enter the water without the permission of the head official. This one (and last year’s suit logo DQ) is on the coaches. They failed to inform the athletes about the rules in each case and in last year’s, see the suit was a problem and get it addressed before the swim.

This rule is just not for high school, this is also a USA Swimming rule and possibly a FINA rule. A swimmer cannot re-enter the pool after he/she leaves the pool. Let’s not blame the coach. These kids are club swimmers. Club swimmers should already be aware of this rule. Let’s think about club swimming, once a heat is finished a new heat starts. You never see relay swimmers getting in the pool after their heat.

There are many errors in this article. After completion of the race, the two swimmers joined other swimmers from different teams who were already in the pool warming down. However, it was ruled that the relay would not be viewed as a unit but as individual swimmers. Therefore, under their interpretation of the rule, only the final swimmer in a relay is allowed the opportunity to cool down. This is a true disadvantage to the other swimmers and is a quite narrow and unfair interpretation of the rule. After last year’s logo mishap, CHSAA amended their rule and stated that in the future the swimmer would be given a warning and allowed the opportunity to change suits. GIven that other… Read more »

Not that this isn’t an unfortunate situation for everyone involved. But for the conference meet at least, the athletes were only permitted to enter the pool (after each event) once it was announced that the pool was open. The rule still applied, and should have been reinforced by needing to wait until permission was given. We have seen relays disqualified for this in the past during the CO high school season.

Stock photo for this article is Harrison Lierz at the 2017 Arena Pro Swim Series meet in Austin, TX. (Championship final in the 200 back.) It has been mentioned in other local Colorado media posts that Harrison had about 5 minutes between the 200 Yard Free Relay (with the 20.10 relay split) to swim the championship round for the 100 back and took the win.