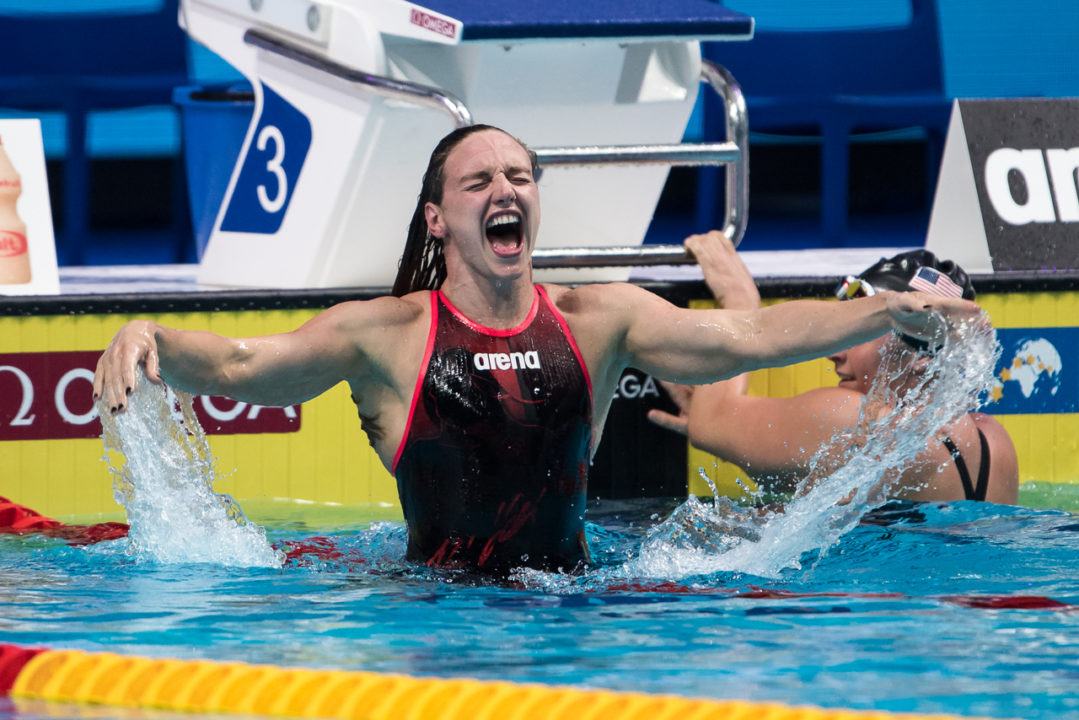 Hungary's Katinka Hosszu was in full-in Iron Lady mode, while Vlad Morozov did damage for the men on night 1 in Beijing. Archive photo via Peter Sukenik/www.petersukenik.com

The Chinese contingency was strong on day 1 of the FINA World Cup on their home turf, with swimmers from the host nation of this 3rd cluster stop topping the podium across 4 events. First up was teen freestyle ace Li Bingjie, who was competing without her partner in crime and newly-minted 400m free World Record holder Wang Jianjiahe.

Without Jianjiahe in the mix Bingjie surged to the lead in the 400m free and never looked back, stopping the clock at 3:59.20 for the win. Li’s outing here in Beijing represents the 2nd fastest of her young career, with her time of 3:59.14 from the World Cup in Tokyo last year sitting at the top of her list.

Dutch swimmer Femke Heemskerk showed her versatility in snapping up 2nd place with a very respectable 4:02.24, while Liu Yaxin rounded out the top 3 in 4:04.30. Heemskerk sits as the 4th fastest swimmer in the world with the 4:00.03 notched in Budapest.

Of note, Hungary’s Katinka Hosszu had earned the top seed of the morning in this women’s 400m free with an AM time of 4:05.76, but she scratched the final.

China took the men’s edition of the 400m free as well, with Ji Xinjie beating the field in a mark of 3:40.82. The 21-year-old who earned 4 bronze medals at this year’s Asian Games led tonight’s race wire-to-wire, beating out tough racer Mykhailo Romanchuk of Ukraine, the reigning LCM European champion in this event.

America’s Blake Pieroni got his name on the board as the bronze medalist tonight, earning a mark of 3:45.32. The former IU Hoosier’s best time over the first two clusters was the 3:41.79 notched in Eindhoven.

The 3rd gold medal for China this evening came in the form of Xu Jiayu‘s performance in the men’s 200m backstroke. Registering the only sub-1:50 effort of the field with his podium-topping 1:49.08, Xu now checks-in as the new Chinese National Record holder in the SCM version of the event. His effort tonight smashed his previous personal best of 1:50.61 clocked way back in 2014 at this same meet.

Xu denied Australian Mitch Larkin a run at taking the 200m back title yet again, with the 2015 double world champion settling for silver in 1:50.72. However, Larkin still has the leg up in the world rankings, wearing the crown by just .01 over Xu.

The final gold for the Chinese came tonight courtesy of Li Zhuhao who rushed to the wall first the 100m fly to win by just .10. Zhuhao took gold in 50.74, while Belarusian swimmer Yauhen Tsurkin was right behind in a mark of 50.84.

Li was just over a second off of his own Chinese National Record of 49.53 from last year, while Tsurkin has been under the 50-second threshold once in his career with the 49.99 that rendered him 6th in the 2014 Short Course World Championships final.

With Hosszu having dropped the 400m, she had extra fuel to take 2 golds this evening. The 29-year-old multiple Olympic champion powered to the top of the pile in the 100m IM, clocking 57.05 for the victory. She holds the World Record in 56.51 from 2017 and was within half a second of that performance this evening. In fact, Hosszu’s 57.05 inserts itself in the 11th spot among the fastest performances in history.

Behind her was Sweden’s speedster Sarah Sjostrom, collecting silver in 57.71 for the only other swimmer under 58. Sjostrom’s fastest is 57.10, a time that represents the Swedish National Record. Australian dynamo Emily Seebohm was 3rd tonight in 58.63.

Zhang Yufei opened in a quick 27.30, but that was the only lead over Hosszu, as the Hungarian moved ahead and didn’t look back. For Hosszu, her time tonight checks-in among her own top 10 performances of all-time and is just .01 shy of the 2:02.87 she produced in Eindhoven that sits as #1 in the world.

Although Hosszu raced the women’s 200m breast, she faded to 6th and saw Russia’s Yulia Efimova earn the gold in 2:16.98. Efimova’s effort checks-in among the top 25 performances of all-time in the SCM version of the event and represents the 2nd fastest time this year only behind her own 2:15.62 from September.

Teammate Vlad Morozov also gave Russia some hardware in the form of double wins in the 100m IM and 50m free. In the former, Morozov fired off a wicked-fast 50.84 to beat reigning short course world champion Michael Andrew of America by almost a second. MA clocked 51.65 for silver, while Japan’s Hiromasa Fujimori was the bronze medalist in 51.95.

Morozov’s mark of 20.87 easily won the 50m freestyle over MA as well, with the American touching in 21.44. Morozov’s 20.51 World Cup Record from October remains as the top time in the world this season, while Andrew’s 21.01 from last month is positioned 4th.

Additional winners this evening include Kira Toussaint who won the women’s 50m backstroke in a time of 26.21 over China’s Fu Yuanhui‘s 26.33. For Toussaint, her mark was just .11 over Ranomi Kromowidjojo’s national record from earlier this season.

Kromo herself was in the pool tonight, wreaking havoc in the women’s 50m free. She managed to top her rival Sjostrom of Sweden once again, collecting a winning mark of 23.48 to Sjostrom’s 23.54. Heemskerk rounded out the top 3 in 23.91.

If Hosszu were back in an “iron” mode she wouldn’t skip 400FR final. I would say that she got finally in the clever mode at this world cup. She has figured out the “weakest link”. And that is 100IM. That is where she got high FINA score – 971. That was the reason to not swim 400 to be fresh for 100IM. And that is what can probably help her to win this last cluster. Sjostrom should try hard in fly events to beat this score.

After world records of Sarah Sjostrom the young 15 years old PHENOM of Li Bingjie was the major sensation of 2017 season. That is when for the first time people start to think that Katie Ledecky may face the challenge at her signature events. Therefore a lot of attention was paid to each start of Li this season to see how fast would she progress in the chasing of super star. Well, nothing’s happened. Li Bingjie was consistent all season long, but it was the consistency of taking two steps back from the heights achieved in 2017. One may think that we just see another example of short lived success of young Chinese female swimmers. And I would think the… Read more »

How many times are you going to bring this up?

Whenever I feel like that, unless these facts offend your feelings.

I see Yozhik the troll is still active on SS