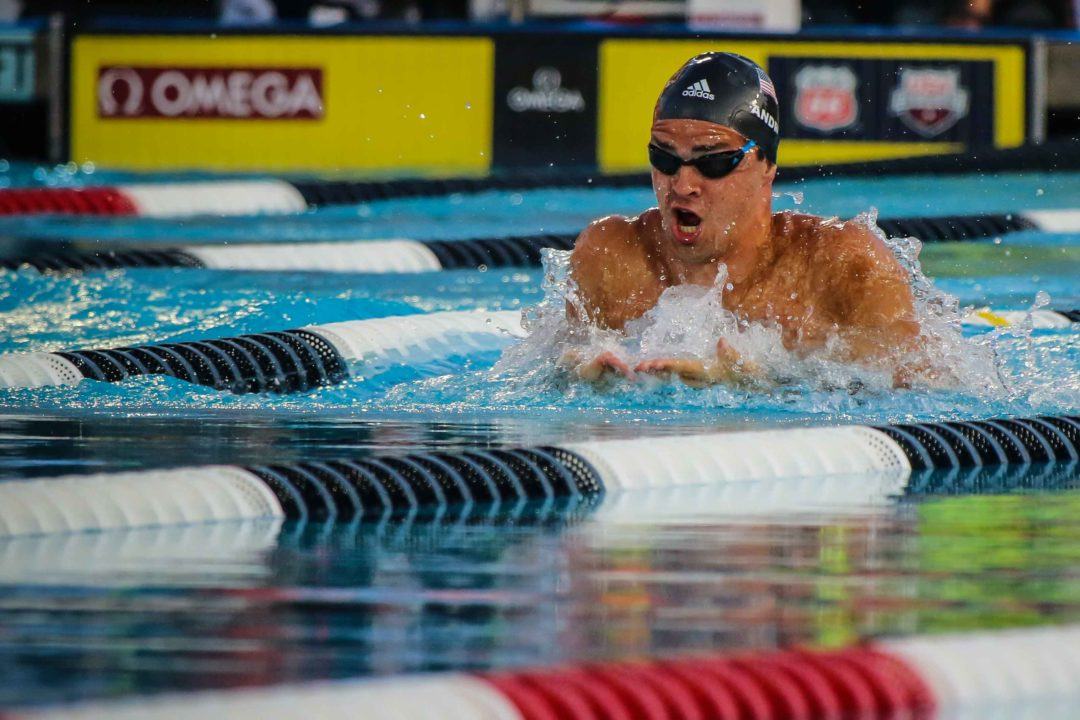 Although a few notable names will be absent, key talent such as Michael Andrew will keep the competition fierce at the FINA World Cup stop in Beijing this weekend. Archive photo via Jack Spits

Many of the same names prevalent thus far over the first two clusters of the 2018 FINA World Cup will be present in Beijing to kick-off the third and final cluster of this season’s series. America’s Michael Andrew and Blake Pieroni are set to race, as are World Cup mainstays Ranomi Kromowidjojo of Netherlands and Mitch Larkin of Australia.

Olympic champion Pernille Blume is on the entry list representing her nation of Denmark, as is China’s flymeister Li Zhuhao.

Missing from the initial entry lists, however, are South Africa’s Chad Le Clos and China’s Wang Jianjiahe. Le Clos is currently ranked 9th overall in the money standings, set back from previous years with a loss to Michael Andrew in the 100m fly in Kazan while also missing a day of World Cup competition due to illness. For Wang’s part, the teen has crushed World Junior Records en route to gold across the circuit, yet will be absent on her home turf this time around. She’s ranked 4th in the money standings through cluster #2.

The top 5 earners are as follows:

I don’t understand it. What is the reason for not letting Wang Jianjiahe to compete in this last cluster of World Cup? She wasn’t sent to compete in cluster #1 and nevertheless became the leading force in money and total points competition just after two stops of the second cluster. Even 82 points lead of Sarah Sjostrom is no guarantee to be a winner of the Cup. Wang can easily outperform Sjostrom in three remaining Asian stops by 27 in each. All she needs is beating Belmonte’s 5 years old times in 400 and 800 events and being on podium at 200. All this season long she was very reliable in her races and four weeks ago she demonstrated that… Read more »

The Cup had been swum from Wang, Le Clos, etc. As I remember this year you have to start in every meet for the total prize money, so for the Cup.

I thought it was a requirement for cluster bonuses only. If you are right about requirements for total Prize money then all my arithmetic above is incorrect.

Maybe Chinese swimming federation doesn’t want Li and Wang compete against each other and gives each Chinese leading swimmers the opportunity to earn some money. Would be interesting to see if Li Bingjie is same successful in SC as was Wang in European cluster of world cup. The LCM season this year wasn’t bad but wasn’t definitely a bright one neither for Li Bingjie.
Her personal bests in SC were set last year during her best season and were not very impressive.