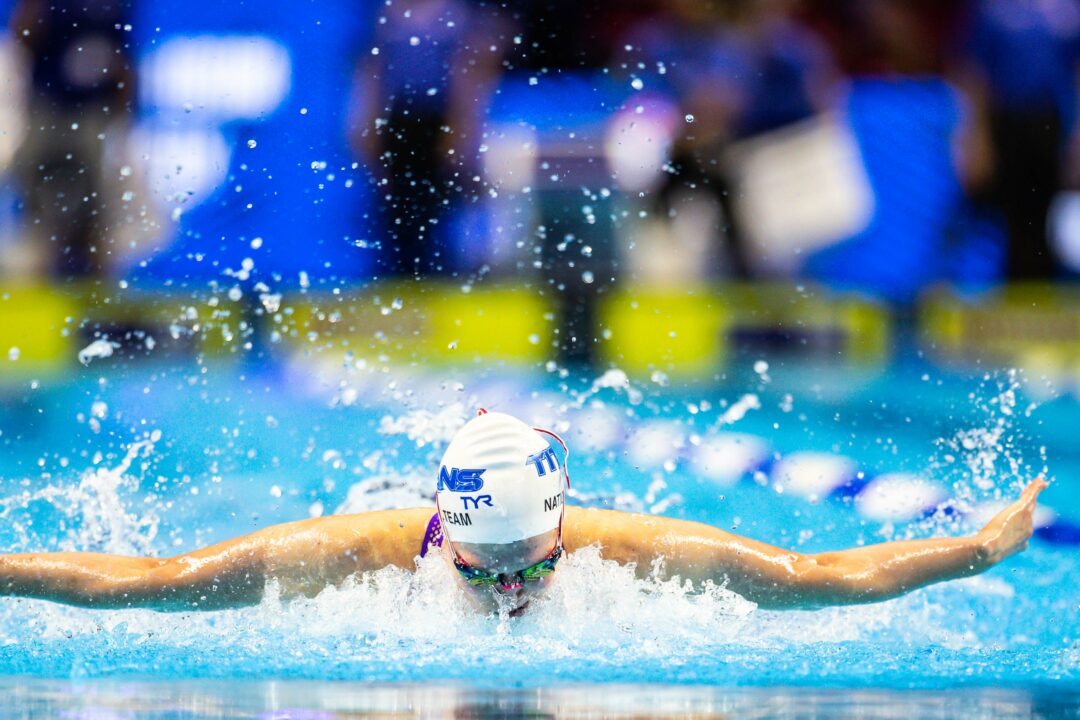 16-year-old Claire Curzan has scratched out of the 100 back heats this morning, resting up for tonight's loaded 100 fly final. Archive photo via Jack Spitser/Spitser Photography

16-year-old Claire Curzan has scratched out of the 100 back heats this morning, resting up for tonight’s loaded 100 fly final.

She’s one of a few key scratches out of the top 24 seeds this morning. 18-year-old Gretchen Walsh has also scratched that 100 back. She was 12th in the 100 fly semifinals last night, but is expected to have her best Olympic chances in the 50 free and 100 free later this week.

Harvard star Dean Farris has pared down his lineup, focusing in on the 100 back instead of the 200 free. Farris – among the best in history in the short course yards versions of both events – had entered both, but was expected to drop one of the two somewhere along the line. The 200 free offers more chances to make the Olympic team, with up to the top 6 earning Olympic roster spots in the final. But the 100 back is a much less loaded field.

2016 Olympian Jack Conger also scratched out of that 200 free. He was seeded just outside the circle-seeds in 26th.

A couple of high-seeded 400 freestylers dropped out of that race: #5 seed Erica Sullivan and #6 seed Ally McHugh. Both are more likely to make the team in the 800 or 1500 frees. McHugh was 5th in last night’s 400 IM final.

All scratches out of the circle-seeded heats for Day 2 Prelims:

What? I don’t understand for Dean how that is a better choice?? 100 back is probably one of the most men’s competitive events in trials while 2 free is wide open rn.

100 back used to be very competitive for the men. Can’t say we’ve seen anything lately that could compete for a medal though.

Casas and Murphy?? Not to mention Michael Andrew is on point this meet.

if his 100BR is any indication a relaxed 100BK might be a top2 result in finals for MA.

Agree, on the surface the 200m Free was his best chance to make the team and that 100BK will be tough to beat out Casas or Murphy for a spot.

I’m a huge Grevers fan but winning a gold medal many years ago doesn’t mean anything for this meet. If Lenny Krazelberg were in this event you wouldn’t be saying “There are 3 gold medalists in the 100 back! Better stay out of that race!”

Yeah… I don’t know about scratching the 2Free (especially when you’re seeded at a relay spot). I hope it works out for him and he doesn’t look back on the scratch with regret.

Yeah like go to Olympics at least as a relay swimmer

If only two spots made it in the 200 free I would understand Dean scratching it. I’m really confused why you would scratch it when you seemingly have such a good shot at a relay spot. I hope nothing is wrong.

Good for him. At the end of the day do what makes you happy.

But why wouldn’t you try for the relay spot? He was one of the favorites there. I hope everything’s ok

We think of Farris as a 200 freestyler because of his NCAA resume… but I think in long course meters, the 100s are a much better distance for him. I definitely thought he’d go for the 6 Olympic spots vs the 2, but I do think the 100 LCM back is probably a better event for him than the 200 LCM free.

Probably for him training for the 100s (free and back) are completely different and incompatible animals than training for a 200 LCM free. Confidence-wise, he’s going all-in for the 100 free for a relay slot, and the most compatible training companion for that would be the 100 back.

That makes sense, I forgot about the 100 free but probably has a better chance there than the 200.

Conger putting all his chips into the fly basket seems like a bold move. Figured he could have at least a 1:46-mid in him again.

Agreed. I think MA could beat him in the 100 fly but I don’t think he will swim the final so Conger should be the favorite for 2nd.

Conger will be lucky to break 52. 51.8 at best, and there are a bunch of guys faster than that.

And just like that, years of Dean Farris memes go down the drain.

Why would any coach sign off on this move? That is the bigger question here.

because he wanted to swim the 100 back….

Imagine being hyped for years then deciding 300 yards is too much to race? Gee whiz.

Looks like no apology will be necessary. Unless you meant 54.9

Why hath our King forsaken us?

Is Lochte scratching? Can’t imagine him swimming the 100 back…