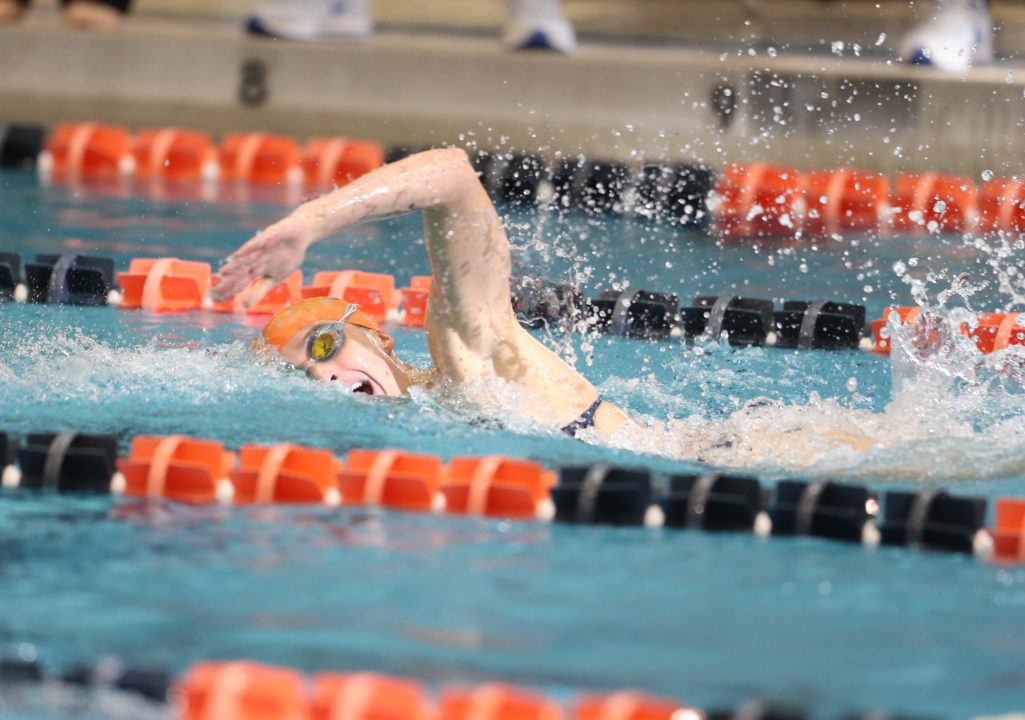 We’ll be previewing the top 12 men’s and women’s programs for the 2018-2019 season – stay tuned to our College Swimming... Archive photo via Courtesy Virginia Athletics/Matt Riley

We’d projected the Cavaliers to take a bit of a step back last season, after losing distance star Leah Smith to graduation and head coach Augie Busch to Arizona.  But Virginia flourished under new head coach Todd DeSorbo.  Not only did the Cavs take back the ACC title from NC State (where DeSorbo had previously been an assistant), but seniors stepped up on the sprint free relays, and Virginia moved up to finish 9th at NCAAs, after a 12th-place finish the year before.

Last year this was something on an unexpected strength for Virginia, as the Wahoos swept the freestyle relays at ACCs, including a conference record-setting mark in the 400 free relay.  They kept the momentum going at NCAAs, taking 4th in the 200 free relay, and 3rd in the 400 free relay.  However, there’s some reason for concern this season, as Caitlin Cooper and Laine Reed have both graduated, leaving some big holes on those relays.  Individually,  Cooper tied for 6th in the 50 free at NCAAs, while Reed made the B-final of both the 50 and 100 free.

That’s not to say however that the Cavaliers are completely bereft of talent. They do return junior Morgan Hill who, like Reed, made the B-final in both shorter free events at NCCAs.  Sophomores Anna Pang and Kyla Valls had promising splits in the 200 free and 400 free relay, respectively, at NCAAs, and senior Eryn Eddy split 47.3 anchoring the 400 free relay at ACCs.  None of the incoming freshman have times that would appear to allow them to make an immediate impact, but both Jessica Nava and Sophie Skinner are possible relay pieces.

There’s a lot more depth at the 200 distance.  Senior Megan Moroney made the A-final at NCAAs, sophomore Paige Madden‘s time from ACCs would’ve made the B-final at NCAAs, and the Cavaliers also bring back Eddy and Hill from their 7th-place 800 free relay.

This was once one of the Cavaliers’ strengths, especially recently with Leah Smith going on a several year run as the best NCAA distance swimmer not named Katie Ledecky.  But, with Smith gone (both graduated and having moved to Arizona to follow Busch),  Jen Marrkand was the only Cavalier to scoring either distance event at NCAAs.   CeCe Williams also picked up some distance points at ACCs, but both she and Markaand are now out of eligibility.  Senior Rachel Politi made the C-final in the 1650 at ACCs, and freshman Carter Bristow projects to score around there as well, but both are currently a ways off from contributing at NCAAs.

Sophomore Abby Richter was the Cavaliers’ top finisher in an IM event by virtue of finish 5th at ACCs and  17th at NCAAs in the 200 IM.  Sophomore Erin Earley and Politi provide some depth here, with both women earning a spot in the A-final of the 400 IM at ACCs, albeit both with times well off what it’d take to score at NCAAs.  Freshmen Julia Menkhaus and Skinner are listed as IMers on the Cavaliers’ roster, and both come in with 400 IM times that should score comfortably at ACCs, but again, they’d both need big drops to be a factor at NCAAs.

Markaand was once again the only Cavalier to score in the fly events at NCAAs, taking 9th in the 200 fly.  Pang split a solid 51.77 on the 400 medley relay after going 52-mid in the individual 100 fly at ACCs, where she finished 5th, so she has some NCAA scoring potential in the event.

Freshman Nava‘s lifetime bests of 52.9 and 1:58 both come from 2016.  If she can repeat those times, she’ll score easily at ACCs, and especially given that those times are two years old, it seems reasonable that she has NCAA scoring potential as well.  There is again depth here in terms of conference scoring, as Politi and Emma Seiberlich both picking up a few points at ACCs in the 200 fly.

Backstroke is one of the stronger events for the Cavaliers at the conference level, but again, they were unable to pick up any points in the discipline at NCAAs.  Richter was 6th at ACCs in the 100 back, but didn’t swim it at NCAAs, presumably to focus on the 200 medley relay. Similarly, Moroney was 3rd at ACCs,  but opted for the 200 free at NCAAs, where she made the A-final.

Additionally, Madden won the 200 back at ACCs, but couldn’t quite match her time at NCAAs, finishing 17th in prelims.  Moroney did finish 10th at NCAAs after earning 3rd at ACCs.  The Cavaliers had several other swimmers earn backstroke points at ACCs, and Menkhaus projects to contribute to at least the ACC total, with NCAA scoring a possibility.

This was a struggle for the Cavaliers, both at ACCs and NCAAs.  With Vivian Tafuto unable to match her best times, the 1:01.40 split on the breast leg of the 400 medley relay was the main culprit in UVA missing either final in that event at NCAAs.  On the bright side, Tafuo and Mary Claire Tansill did pick up some points in the non-championship finals at ACCs, and as alluded to earlier, Tafuto has been under 1:00 before.  If she’s back there, that’ll help out the relays a lot.

Either way, reinforcements are on the way.  It appears that breaststroke was a bit recruiting emphasis with the incoming Cavalier freshmen, with three of the seven incoming freshmen listed on the Cavaliers’ roster being breastrokers.  Those three — Kaki Christensen, Julia Eskew, and Alexis Wenger — all have personal best times of 1:00 or 1:01 in the 100 breast, and between 2:11 and 2:15 in the 200 breast.  All of those times would score at ACCs, and it’d be something of a surprise if they don’t get at least one A-finalist in each breast event out of that bunch.  While they may not be an immediate impact at the NCAA level, the new depth should ensure that someone will be able to provide a solid enough split on the relay to keep them scoring points.

There’s no doubt that the loss of the seniors will hurt, particularly on the sprint free relays.  However, DeSorbo does have a reputation for working some sprinting magic, so there’s a good chance that the Cavaliers will find some new faces to fill in those relays.  A lot will depend on the freshmen, some of whom’s best times come from two or three years ago.

This team looks built to contend for another ACC title, but there’s some question as to whether or not it has the top end point scorers necessary for March.  If the team wants to hold on to a top ten position at NCAAs, it’ll also need some of the women who took a step back from ACCs to NCAAs to peak in March rather than February, something that should happen with experience.

Vonderhaar could also help with the breaststroke depth since she has a 1:00

Excited about these Cavalier S’women and what lies ahead! #Levelup