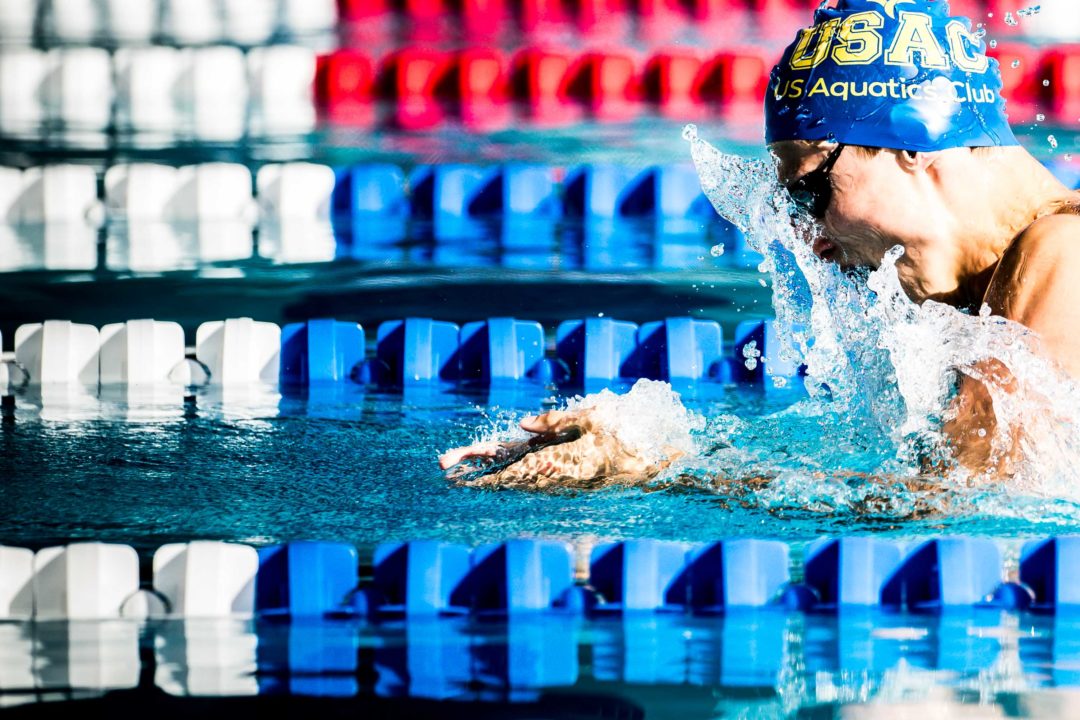 Liam Bell will swim for Cal beginning in the 2021-2022 season. He is one of six Alabama male swimmers who entered the NCAA transfer portal last season. Archive photo via Jack Spitser/Spitser Photography

Liam Bell will swim for the Cal Golden Bears in the 2021-2022 season with either 2 or 3 seasons of eligibility remaining.

Bell, originally from Atlanta, entered the transfer portal after his freshman year at the University of Alabama but ultimately decided to remain in Tuscaloosa. He re-entered his name in the portal after withdrawing from the NCAA Championship meet last spring.

Bell leaves Alabama as the school record-holder in the 50 and 100 breast. He was the SEC runner-up in the 100 breast during his freshman season. He touched fourth in the 200 breast and 17th in the 200 IM at that same meet.

He was unable to match that level during his sophomore season. Bell went 1.5 seconds slower in prelims of the 100 breast at the 2021 SEC Championships, narrowly squeezing into the C-final. He ultimately won the C-final, but was still two seconds slower than the previous year. He swam the 50 and 100 free, touching 26th and 42nd, respectively.

He withdrew from NCAAs more than 24 hours after invites were sent, meaning no alternates were invited in his place. His in-season times seeded him 24th in the 100 breast, 43rd in the 50 free, and 42nd in the 100 free. For reference, he was the 6th seed in the 100 breast for the 2020 NCAA champs before they were canceled due to the pandemic.

Alabama recently named Roman Willetts to its coaching staff, who spent the last year working as one of Cal’s volunteer assistant coaches.

The Crimson Tide has seen multiple coaching changes in the last two years. Bell committed to the team while Coley Stickels was head coach. Stickels resigned after a year and a half, leaving interim coach Ozzie Quevedo to oversee the team in the middle of the season.

Alabama named Margo Greer as the new head coach for the 2021-2022 season. This will be her first full-time coaching job at any level.

Geer has a big rebuilding project ahead of her: besides Bell, Matt King, Colton Stogner, Andrew Shea, Alec Dixon, and Nico Hernandez-Tome all entered the transfer portal at some point last season.

The Cal Golden Bears sent 19 men to the U.S. Olympic Trials in June. Of those, Ryan Murphy, Bryce Mefford, Andrew Seliksar, and Tom Shields will travel to Tokyo to represent Team USA at the 2020 Olympics. Cal head coach Dave Durden is the head coach of the American Olympic Team

Bell heads to Cal as a top breaststroker for the team. During the 2020-2021 season, he would have been the team’s second-fastest in the 100 breast and their third-fastest in the 200. Rising senior Reece Whitley was their fastest in both events last season and currently holds the school’s records in each race. Bell and Whitley will train and compete together for at least one year, unless Whitley decides to exercise his option for a 5th season.

Tear it up Liam! Your future is very bright! We will all be cheering for you from afar!

Liam signed to swim at Alabama because Jonty Skinner was there. A coaching switch was made just weeks after he committed. The coaching staff changes (4 head / interim head coaches in 2 years!) at Bama is crazy. Swimming for Dave Durdin will be a great opportunity for Liam. He decided to change schools for the education; not that Alabama isn’t a great school, but Cal is a better fit for his plans.

He suffered a groin injury just before SECs. He probably should not have competed, but he did so for the team at the request of the coaches. It made the injury worse. He had to withdraw from NCAAs. He needed time to heal his body and to… Read more »

We both swam at Swim Atlanta and Dynamo around the same time. I don’t know Liam personally (I’m a bit older than him), but I know people who are very close to him who have spoken about why he’s picky with coaches.

He’s a very talented swimmer (basically fell out of bed and won state titles) and it’s a shame Bama has become such a joke in terms of coaching changes. There’s a reason a lot of the pro swimmers left and why half the team is in the transfer portal rn

I could not agree more! Liam is an amazing kid both inside and outside the pool! Cal is extremely blessed to have him join the team! We are so excited to watch what the next few years hood for him!

Liam committed to Bama when Dennis and staff were still there. He wanted to swim for Jonty, not Stiffler.

Maybe he’s tired of the type of people that tend to live in Alabama. Yeah I said it.

TBH, the people that live in/around Berkeley are infinitely worse.

You mean more intelligent and not racist, right?

While I will give you that people in Berkeley will tend to be more educated and intellectual, people on the political left in that area can be just as intolerant as the “racists” in the south.

Intolerant? At least Berkeley is accepting of all races, religions, sexual orientation, etc.

If you are white, Christian, straight, and/or even a degree right of a centrist, then they sure as hell aren’t accepting.

I’m neither white, Christian, or straight, yet even I could see this.

This decision just doesn’t make any sense to me. Why give up swimming for Margo, and a prestigious Alabama education, to go to Cal?

Uhhh…seems pretty obvious to me. To swim for Durden (men’s oly team HC, 2019 nat champs HC vs rookie HC) and an even more prestigious education at Cal.

Who’s durden? Geer is a future hof coach why would he give that up

I’m pretty sure the original comment was sarcastic. Cal’s undergrad is widely regarded as one of the top 25 or so in the country, while Alabama is often the butt of jokes for below-average education. And Durden vs. Geer…c’mon, that should’ve been obvious.

Roll tide. Say hi to the naked student guy for us at cal

Alabama is where “Legends are Made”!
National Championships support and help to build the finest sporting facilities for athletes. UA just finished a $29 million indoor pool. UA is focusing on taking their swim program to the next level… sit back and enjoy the ride…
Roll Tide!

That phrase is BS. Most schools have graduated a number of folks that went on to do great things. The only legends at Alabama were the Bear, Namath, and now Saban.
That swim program is now on its decent from what Denny had built up. Ozzie and Barber can not keep it propped up much longer without the name of an experienced Head Coach.

If we want to seriously go off of the accomplishments by each school’s graduates, then UC Berkeley has 34 Nobel laureate alumni. University of Alabama has…none.

Jealous… UA is where legends are made! Can’t say the same for Berkeley

Alabama’s programs aren’t that bad, though.

I know that these rankings aren’t perfect and that for some, Bama can provide a “good enough education”, but these two schools aren’t in the same stratosphere.

UC Berkeley has been considered the #1 public university in the world. Cheers to Liam and Go Bears!

USNews rankings for Universities are based on what?

In reality, the quality of your education is going to depend more on how much effort you put into rather than what school you go to. Just because you go to Cal or Stanford doesn’t mean you’re actually going to have a good education or be successful. The real benefit of being a graduate from a highly ranked school networking opportunities that exist because of it, not because of the actual quality of the education.

Irony is dead at SwimSwam.

You can believe it or not, but I will also say with nearly 100% certainty that King is going to UVA. There might be some logistical things that need to be sorted out before everything becomes official, such as scholarship/FA and actual admission to the university. I assume the commitment announcement will come once that is done, and at that point you’ll see that this is true.