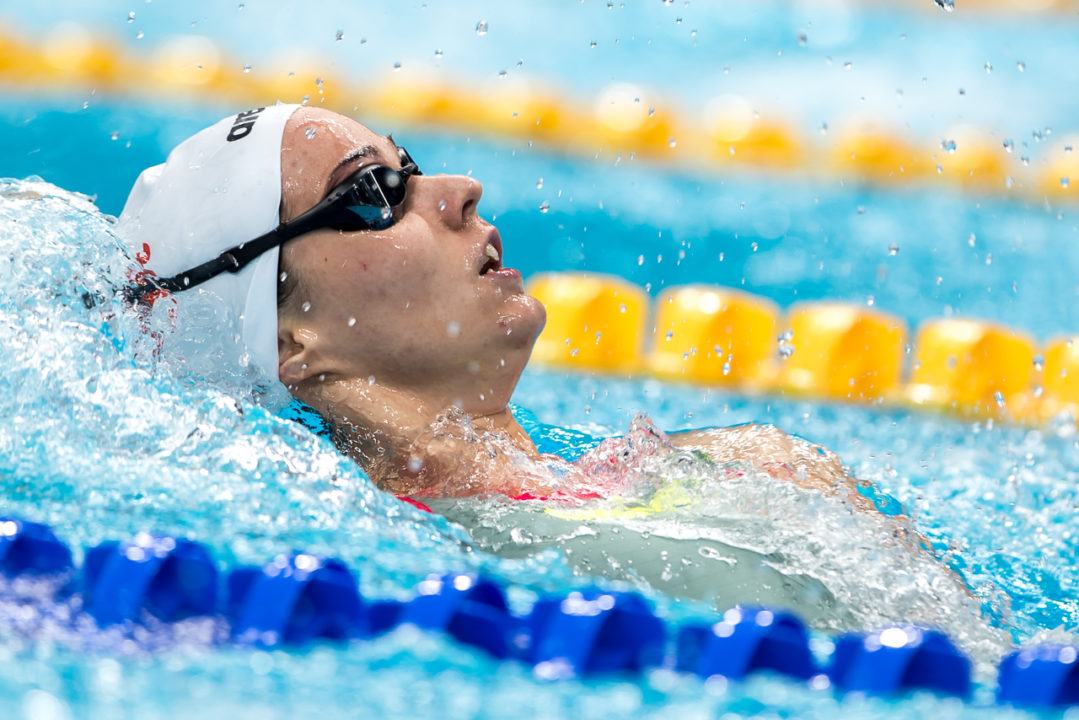 Hungarian Nandor Nemeth whipped out the fastest 100m freestyle performance of his life to take gold in a new National Record-setting effort tonight in Debrecen. After establishing himself as the 3rd seeded swimmer out of heats with a morning mark of 49.43, the 19-year-old two-time World Junior Championships runner-up blasted a new personal best mark of 48.17 to take gold and become the fastest Hungarian ever.

Nemeth opened in a mighty 23.23 and closed in 24.94 to register one of two sub-49 second times in the final. Dominik Kozma touched .72 later in a mark of 48.89 for silver. Youth Olympic Games multi-medalist and 200m fly winner here, Kristof Milak, fired off a time of 49.23 to take bronze in the race.

Nemeth’s time overtook the previous Hungarian National Record of 48.26 that Kozma clocked in Budapest at the 2017 World Championships. The teen’s time now checks-in as the 5th fastest time in the world this season.

Olympian Zsuzsanna Jakabos got her hand on the wall first in the women’s 100m free sprint, registering a winning time of 55.43. That held off Zsofia Kurdi, who touched just .22 later in 55.65. Evelyn Verraszto was right behind as well, finishing under 56-seconds in 55.76. None of the women were near the FINA A cut of 54.49, however.

The Iron Lady Katinka Hosszu reduced her number of swims from the morning heats, where the 29-year-old made 5 appearances. Tonight, the Olympic champion kicked things off with a win in the 400m IM, clearing the FINA A cut easily in a time of of 4:35.69.

Hosszu’s victory marked the only swimmer in the race to dip under the 4:40 threshold, with runner-up Boglarka Kapas touching in 4:40.56 for silver, while Jakabos rounded out the top 3 in 4:45.03.

Hosszu’s time tonight is one of her season’s fastest, within striking distance of her 4:33.83 clocked last weekend in Marseille. That outing placed the Hungarian at #2 in the worldwide rankings this season.

The Iron Lady fell short in the 200m backstroke tonight, however, as she saw teammate Katalin Burian roar to the wall in a winning time of 2:08.50. That’s a solid, World Championships-qualifying time from the 24-year-old. Burian’s personal best rests at the 2:07.43 she produced for bronze at the 2018 European Championships, and she’s already been as fast as 2:09.92 this year from the FFN Golden Tour Nice.

Hosszu settled for silver in 2:10.62, but she greatly improved from her 7th seeded 2:16.97 from this morning. The Iron Lady has already been as fast as 2:09.77 last week in Marseille and is well under the qualifying mark for Gwangju.

Fellow Iron Swim Budapest teammate David Verraszto clawed his way to the wall in the men’s version of the 400m IM, fighting off Peter Bernek in the process. Bernek led the duo buy over a second after 200m, but Verraszto turned it on to overtake the lead and maintain it across the back half. Verraaszto wound up hitting the wall first in 4:12.65, while Bernek settled for silver just .15 later in 4:12.80.

Both men dipped well under the 4:17.90 FINA A cut for this summer’s World Championships. Verraszto’s time represents his fastest of the season, beating his previous mark of 4:14.13 from the FFN Golden Tour in Nice.

For his part, Bernek’s effort checks-in as his new lifetime best, overtaking his previous career-fastest of 4:13.62 from this same meet 2 years ago. Bernek now sits as the 3rd in the world this season with tonight’s performance.

Adam Telegdy punched the 2nd fastest 200m backstroke time of his career to take gold tonight. Beating the field by well over a second, Telegdy touched in 1:56.98, less than half a second off of his lifetime best of 1:56.69 clocked at the 2017 World Championships. For his trouble, Telegdy earns the 2019 Hungarian national title and also qualifies for this year’s World Championships.