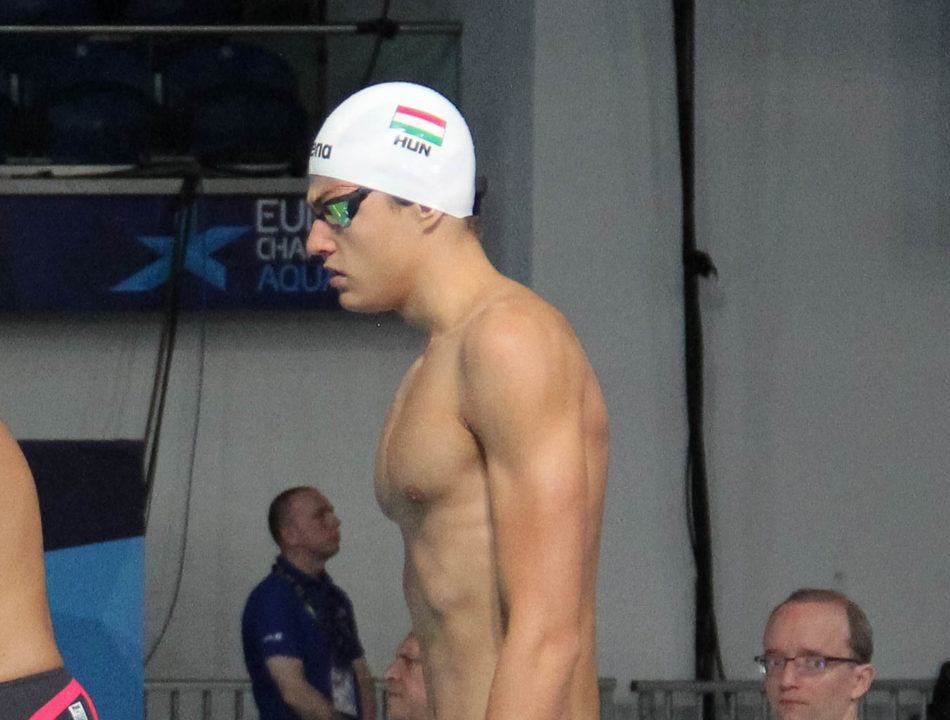 Hungarian Nandor Nemeth whipped out the fastest 100m freestyle performance of his life to take gold in a new National Record-setting effort tonight in Debrecen. Archive photo via Giusy Cisale

Hungarian Nandor Nemeth whipped out the fastest 100m freestyle performance of his life to take gold in a new National Record-setting effort tonight in Debrecen. After establishing himself as the 3rd seeded swimmer out of heats with a morning mark of 49.43, the 19-year-old two-time World Junior Championships runner-up blasted a new personal best mark of 48.17 to take gold and become the fastest Hungarian ever.

Nemeth opened in a mighty 23.23 and closed in 24.94 to register one of two sub-49 second times in the final. Dominik Kozma touched .72 later in a mark of 48.89 for silver. Youth Olympic Games multi-medalist and 200m fly winner here, Kristof Milak, fired off a time of 49.23 to take bronze in the race.

Entering these championships, Nemeth’s personal best rested at the 48.31 notched at these same championships last year, and he followed that up with a 48.55 in the European Championships final for 6th place. Entering 48.17 is new territory for the teen, creeping him closer to that 48-second barrier that inserts him into the big-time.

Nemeth’s time overtook the previous Hungarian National Record of 48.26 that Kozma clocked in Budapest at the 2017 World Championships. The teen’s time now checks-in as the 5th fastest time in the world this season.

the 100 free promises to be pretty fast this summer …..

I think every event is going to be fast.

can’t disagree with that though ….