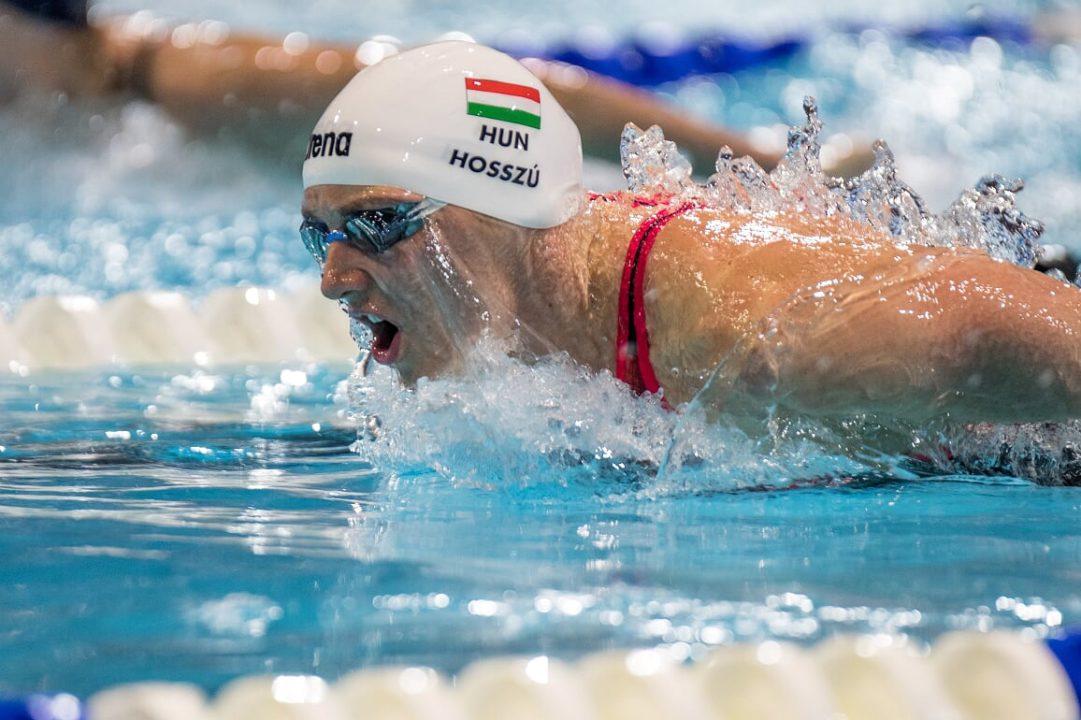 Shut out of the medals last night in the 200m fly, Katinka Hosszu is on the prowl for the 200m IM title tonight in Hungary. Archive photo via Kevin Reust

Hungarian powerhouse athletes Katinka Hosszu and Kristof Milak were both in the water again today to take on day 2’s events at the National Championships in Debrecen.

Milak, who crushed a 200m fly winning time of 1:53.19 last night to take the title over Olympic medalists Tamas Kendersi and Laszlo Cseh, leads the men’s 400m freestyle headed into tonight’s final. Clocking a time of 3:52.66, the 19-year-old multi-Youth Olympic Games champion is within striking distance of the 3:48.08 he put up in Buenos Aires last year for gold. That time ranks Milak as the 5th fastest performer in the world, for right now.

For Hosszu’s part, after finishing a disappointing 4th in last nights 200m fly final, the Iron Lady established herself as the 2nd seeded swimmer in the women’s 200m IM. Touching in 2:16.59, Hosszu saw teammate Zsuzsanna Jakabos top the prelims with a morning mark of 2:14.19.

But, Hosszu leads the entire world with the mighty 2:08.55 she threw down just last week in Marseille, so she was simply in cruise control this morning to land a spot in the final for tonight.

Another teenager in Ajna Kesely eased her way into the mix with a top seeded time of 4:11.60 in the 400m free.  She took the gold in Buenos Aires last year in 4:07.14, a mark that remains the 5th fastest time in the world.

Loretta, Hosszu was not entirely shut out of the medals, she won bronze yesterday in 200 fly. Though she is now shut out from Worlds this year.

That 22.99 is far the world leading time this year.

Is he representing Hungary now?

No, he swims for Serbia. He has dual citizenship (he’s a Hungarian guy born in Serbia), that’s why it counts as a Hungarian NR.

Does Sebastian Sabo still represent Serbia, or has he switched? Guess Sabo is the Serbian variant of Szabó and he is possibly eligible to represent either nation similar to Siladi/Szilágyi?