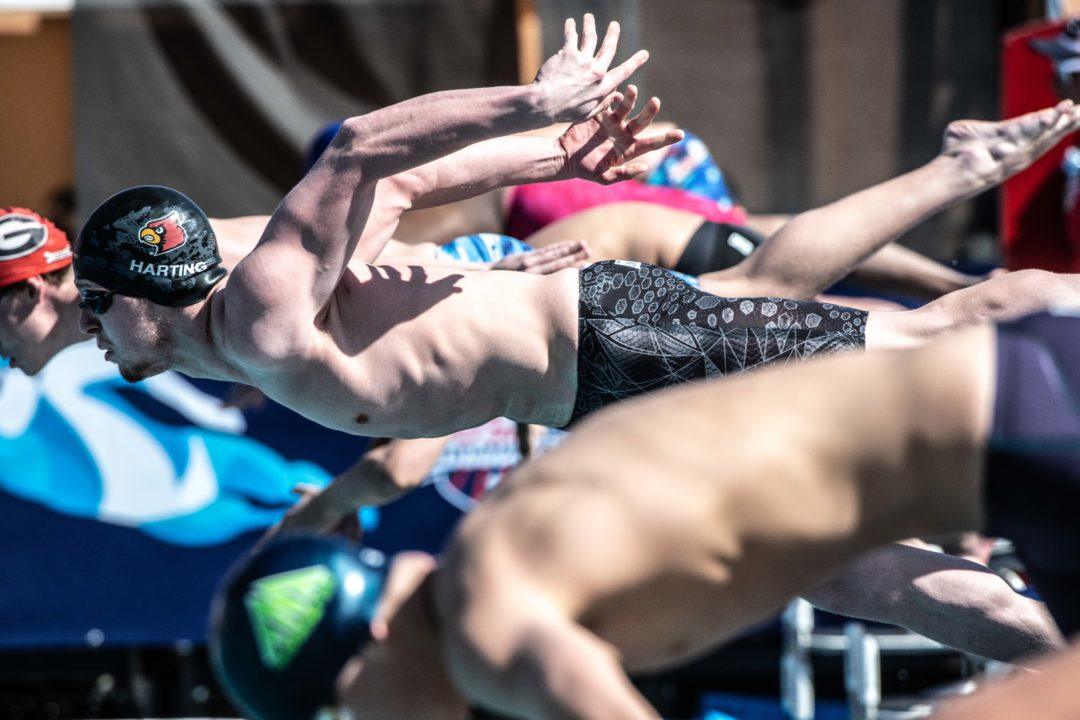 Because they didn't scratch before the scratch deadline, these declared false starts still count as one of a swimmer's maximum allotted entries. Archive photo via Mike Lewis/Ola Vista Photography

There weren’t any super-significant pre-session scratches before the first prelims session at the 2019 men’s NCAA Swimming & Diving Championships, but as the races began, more big names began to come off the board.

Harting split an encouraging 1:31.14 on a rolling start on Wednesday evening’s 800 free relay for 6th-place Louisville. That’s almost a full second faster than he was on that same relay last year.

Also declaring a false start in the 500 free was Florida sophomore Erge Gezmis, who was the 33rd seed.

In the 200 IM, USC senior Patrick Mulcare declared a false start as the 55th seed. Like with Harting, that scratch doesn’t seem like a big deal on paper. But, Mulcare is better than that seed. His best time of 1:44.00 from the 2017 NCAA Championships would have missed finaling in 2018 by a second, but with two years of development, it’s not hard to project Mulcare as being able to drop a second in this race.

Remember that he slogged his way through the Pac-12 Championships, with a full beard in tow, and only (B) finaled in one of his 3 races: his primary event, the 200 back.

Finally, Arizona’s Chatham Dobbs and Florida’s Bayley Main declared false starts in the 50 free. Dobbs was seeded 19th with a 19.26 and Main was seeded 49th with a 19.78.

Because of the nature of declared false starts, because those swimmers weren’t scratched before the scratch deadline, those events will still count as one of their 3 allotted individual events. That would preclude them from being used on all 5 of a team’s relays (unless they scratch, pre-scratch deadline, another event later in the meet). Last year, for example, Louisville used Harting on all 5 relays.