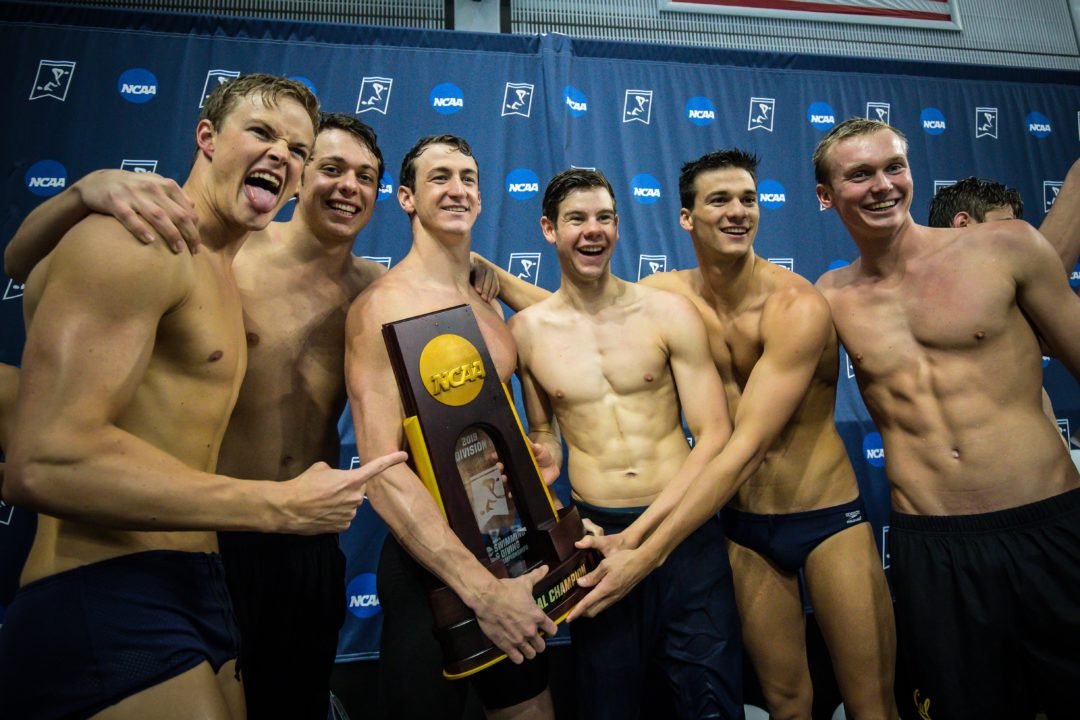 2019 Men’s NCAAs: How Did SwimSwam’s Power Rankings Hold Up?

After spending the entire year tracking and projecting the men’s NCAA Championships, it’s time to look back at how our Power Ranks held up. Spoiler alert: it’s not great, thanks to major overperformers like Harvard and Ohio State.

Cal returns 279 individual points, the most of and team and 103 more than next best Texas. Michigan are 3rd best with 91.

Freshmen under performing the older classes is a consistent year-to-year trend, so a disproportionate amount of the departing points will be filled by return swimmers. That means we can get a reasonable guess about what will happen at next year’s meet by removing the seniors and rescoring the meet.

In this rescoring without seniors Cal still have the most points with 373. Texas are a bit closer to Cal with 288, but still have a significant hill to climb, especially considering that Cal are adding Hugo Gonzalez next fall. Texas are expecting a strong recruiting class, but it’s very difficult to win men’s NCAAs on the back of freshmen (see: 13% of points this year by freshmen).

If Texas pull out a win next year, their path to the title will have to look very similar to Cal’s this year. Last year, Cal had a highly regarded freshmen class that put up the second most points among freshmen classes at NCAA’s (they scored 87.5, Texas were first with 104). This year that class was the highest scoring class of any age at the entire meet with 178 points.

This year Texas had a very-highly regarded freshmen class. They scored the most points of any freshman class at the meet (46), but scored significantly fewer points than the overall top classes at the meet. If the Texas freshmen can more than double their total next year like the Cal sophomores did this year, that will go a long way to narrowing the gap.

Another ray of hope for the Longhorns: Austin Katz and Sam Pomajevich were way under their freshman year point totals this year. Katz scored 17 after scoring 35 last year. Pomajevich scored 0 after putting up 24 last year. While that type of performance isn’t the best sign for their long term prospects, both have been big points guys before. A big break out isn’t required for them to pick up a lot of points, just a return to freshman form.

Working in Cal’s favor: Texas’s top two returners by individual points are their divers Jordan Windle and Grayson Campbell. That means Texas’s large diving advantage should carry over into next year, but it also means that the top two returning athletes on Texas’s team aren’t useful on relays. Texas’s top returning swimmer by individual points is Drew Kibler who scored 25 points this year (it’s worth noting that Kibler is one of the largest beneficiaries of the no seniors rescoring, there he scored 45.5 points. The stage is set for a big sophomore year from Kibler). Cal return 7 swimmers that scored 25 or more points this season. That rises to 8 under the no seniors rescoring.

After the top two teams, the picture muddies. Michigan return the third most no seniors points with 139, but much of their returning strength is in distance events which doesn’t bode well for their relays.

Next are Florida and Indiana with 133.5 returning no seniors points each. They are followed by NC State with 108, Ohio State and Georgia with 102, Stanford with 100, Louisville with 99, and Arizona with 96. Any of those teams are a breakout performance or great freshmen class from 3rd next year.

Curious as to how Michigan returns 139 points when they only scored 99….

The “No SR” column, as explained above, rescores the meet with seniors taken out and underclassmen moving up to fill the vacated spots.

Thanks for the clarification

How many Olympic redshirts are we going to see?????

I suspect a lot.

NC State and Indiana have A LOT of individual and relay points to replace…that’s a tall order…at least Indiana has diving to help.

As I know it sounds ridiculous to argue against the ongoing Texas/Cal dominance…..if there is one team to challenge it will be IU. You can’t forget the importance of diving and though they might not have what SwimSwam considers the top rated recruiting classes over the next couple years…They have untapped talent coming in who will contribute in relays. (Untapped = raw potential and just now hitting stride)

Sure did. Adds him to their current freshman class instead of jamming in to that sophomore class which is already so good. They should write Virginia Tech a thank you note.

Just because Tennessee only returns 14 points (1 swimming and 13 diving) dont mean nothin cause if our other diver gets going and we can find a couple more foreign divers we will be back in the top 10! Them Porcupine-Coonskinned MAN Vols can do it!