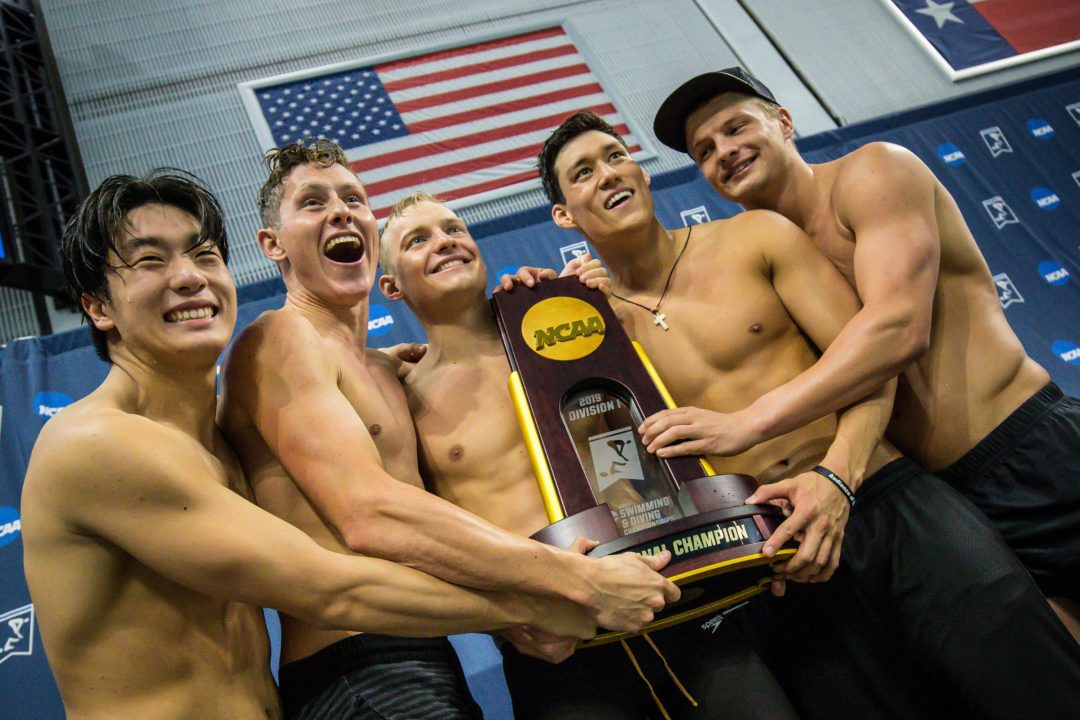 After winning their first NCAA team title since 2014, the Cal Bears moved up in the all-time rankings for the total team championships won. Current photo via Jack Spitser/Spitser Photography

*Note: Scored team champions were not officially recognized by the NCAA until 1937, though there were declared champions by media prior to that.

Over the 4-day meet, 21 new event titles were won. Both Cal and Texas won 5 titles each over the meet, which combined to give the top two times nearly half of the 21 titles up for grabs at the meet. 3rd-place Indiana was right behind with 4 titles won, and Harvard’s Dean Farris scored 2 titles for the Crimson. Michigan, Stanford, Tennessee, Alabama, and NC State also had individual champions during the meet. Looking at the all-time rankings, Harvard was the only team to move up in placement, jumping from 27th to 25th. That breaks their previous tie with Arizona State and now ties them with Washington and Purdue at 12 total titles. Michigan maintains their top spot, with a whooping 166 individual titles won.

*Relays count as one title, diving is included

Braden, have you or anyone at swimswam done this or talked about doing this type of analysis?

Wesleyan was once division I?

Amherst and Williams also have titles. Williams remains a formidable team, but in Division-III of course.

Amherst and Williams are really the teams you mention to bring up D3? Not Kenyon (34 men’s and 23 women’s titles) or Emory (12 women’s titles)? While I appreciate your attempts to eliminate D3 erasure, I’m not sure those further your argument considering Williams hasn’t won since the first D3 Champs and I can’t find when Amherst won.

D3 is valid – I’m not sure you’ve followed the point of this conversation. Kenyon and Emory have never won Division I event titles, while Amherst and Williams have. That’s why Williams and Amherst were brought up, and not Kenyon and Emory.

I didn’t know Frolander swam NCAA. An Olympic and world Champion with the unique distinction of attending 6 Olympiads.

Only 70 schools have won an individual title, and 22 of those have only won 1. This sport really is dominated by <20 schools, which is kind of odd given that there are so few scholarships. Top talent has to be foregoing scholarship dollars to be at top programs.

Miami (FL)? Did they ever have a men’s team, or is this men’s and women’s titles? I might just be to young to rememeber there program.

They had a very successful men’s team at one point, and have won 6 swimming event titles. They were 8th at NCAAs in 1996 and 1997.

I think they have divers. Not sure when swimming was cut

The 8th place in 1996 was with just divers.. They did have a great swimming and diving earlier which I believe was coached by Randy Reese.

Texas with most team titles but only 3rd in individual titles. #diving

I think they call that depth…..

Err, I’m not sure that ‘depth,’ per se, is the explanation – but maybe I’m just missing the connection of those two dots. The two teams ahead of them, Michigan and Stanford, were good for a very long time before Texas got good. Like, decades. Texas always had a decent team, but Stanford and Michigan were winning titles in the 1930s and 1940s. That’s a hard history to overcome (even though there were fewer events on offer then).

I was thinking depth brings more titles/meet and better training groups at practice.

Still not sure that I follow, but that’s ok too 🙂

I think he’s getting at the difference between, for example, Dean Farris bringing in NCAA titles in every race that he swam. Texas hasn’t had as many individual swimmers quite as dominant as 2019 Dean, but routinely puts 4 people in finals/consolations in an event, even if they don’t actually win the event. So even though they may have less individual champs, they still pull more points to get team victories. Harvard has a stellar team, but Farris basically carried them to their top 10 finish this year.

I also agree with what you’re saying about Michigan and Stanford having championship caliber teams since the 30s. Just elaborating on what Gator is getting at in regards to depth.

Ohhh ok. Now I understand. That makes sense. Though, Texas holds the record for the 2 meets with the most individual titles, winning 11 in both 2001 and 2017, so it seems like the overall primary explanation is still timeline. But, Texas’ 2018 title was, for example, for sure won by depth – I’d agree with that.

Totally get what you’re saying, and I agree. They’ve only been in title contention for half as long as some other teams. There are years where Texas won with depth, won with stars, and won with both. They’ve pretty much done it all haha. Just wanted to offer further explanation, but yeah, Texas has generally done very well with individual titles over the last 40 years! Other programs have just done better over the last 80. I think if we look at the average rate of individual titles per year over the years where teams have been legitimate contenders, it would probably show Texas at the top. But there would probably be too many factors to consider there to come… Read more »