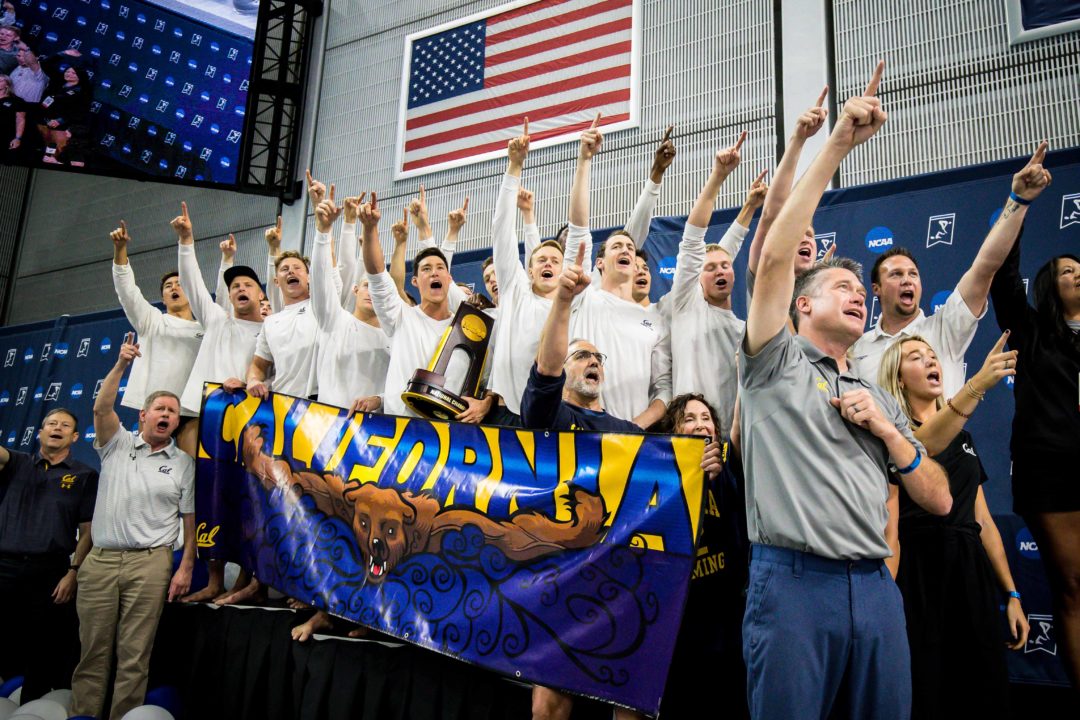 Cal won the NCAA title Saturday night. Here are the numbers. All of the numbers. Current photo via Jack Spitser/Spitser Photography

Cal was really really good this weekend. As the cliche goes: Texas didn’t lose the meet, Cal won it. The Texas men scored 475 points, 26 points more than they scored to win the meet last year. Cal scored 560, the 9th most points any men’s team has ever scored at NCAA’s and the most by any team at this meet since 2004. There have only been 4 previous instances of a team scoring at least 475 points and failing to win the title.

Most points ever at NCAA’s

The engine of the Cal buzz saw was their sophomores who scored 178 individual points, the most of any class at the meet. Next best were Indiana’s seniors who scored 161.

A sophomore class leading the way is a bit surprising at a meet so dominated by upperclassmen. In total, freshmen scored 317 individual points, sophomores scored 606.5, juniors scored 567.5, and seniors scored 989.

Another thing impressive about the Cal sophomore’s performance is how much they improved since last year. Last year as freshmen they scored 87.5 points. They more than doubled that total this year. By comparison the highest scoring freshmen class last year were the Texas freshmen who scored 104 individual points. This year as sophomores, that group scored 69 points.

The performance of each team’s sophomores helps explain how Texas had a returning individual points advantage this year and the highest scoring freshman class at the meet (46 points, Florida were 2nd with 41) and lost. Texas’s other two returning classes were better than last year. Their seniors scored 125 (108 last year) and their juniors scored 61 (39 last year). However, Cal’s upperclassmen also jumped a lot. Cal’s juniors scored 72 after scoring 34 last year, more than doubling their points, and the Cal seniors scored 109 after scoring 97 last year.

Texas scored the most diving points with 84. Tennessee and Miami had the next most with 62 each.

The biggest under performance vs seed came from Michigan. The Wolverines scored 135 points fewer than they were seeded to.

Cal return 279 individual points, the most of any team by a wide margin. Texas are next with 176. Michigan return the 3rd most with 91 followed by Florida with 80.

Cal scored in every single swimming event. The highest single event point total was Texas’s 50 points in the 200 back.

By Swimulator power points, the best individual event swim of the meet was Ian Finnerty‘s 49.85 100 breast. Dean Farris’s 800 free lead off of 1:29.15 was the best including relay splits.

There is a lot of data below a quick table of contents: Final Scores, Individual Scores by Class, Event Scores, and an Individual Breakdown with final times, places, and scores for every swimmer at the meet sorted by team.

How does the swimulator work cause I would rank Deans 1:29.1 much higher than 49.8

I should have been more precise in my wording. My program only pulls times from individual events, not relay splits. Looking Dean’s 200 up manually, it is higher ranked than Finnerty’s 100 breast. Dean’s 200 was a 1011.

NC State will have to rebuild their relays, like many teams! I think they have a good foundation with Nyles, Gio, McLaughlin and Coleman, but would need for a few of them to continue to develop into legit scorers. The incoming freshmen class has some studs also!