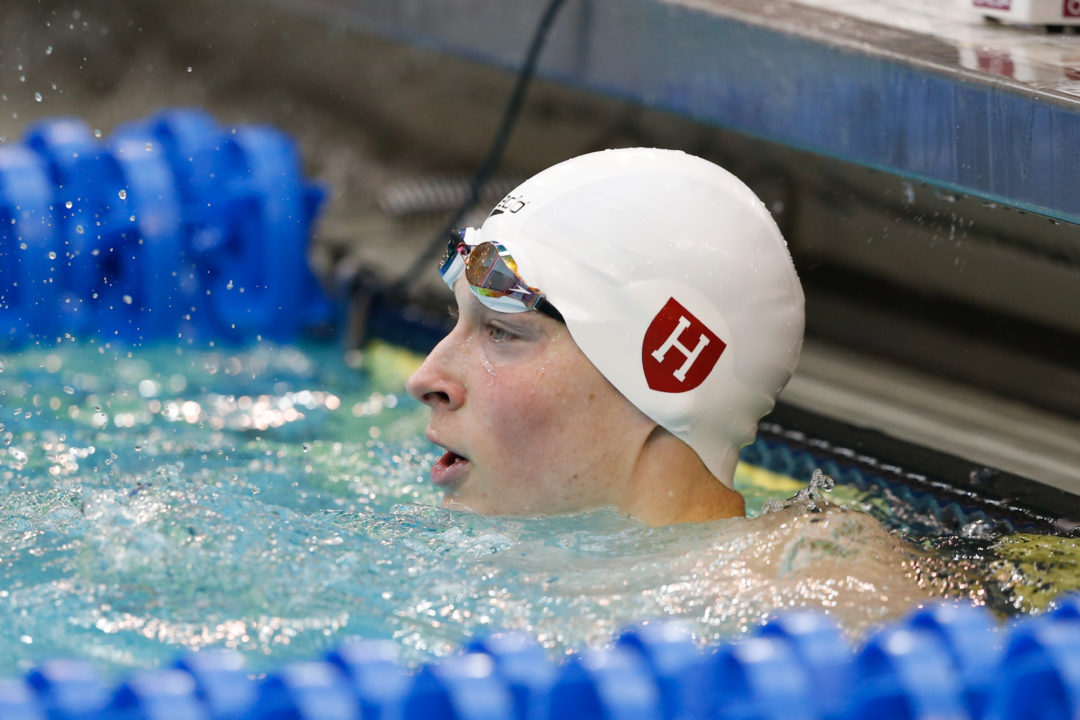 On top of that, the last time Harvard cracked the top 10 itself was in 1963 when they finished 10th. Stock photo via Tim Binning/TheSwimPictures.com

Harvard pulled off a feat that hasn’t been done in 50 years tonight. They finished in the the top 10 at men’s NCAAs, which is the first time an Ivy League team has done so since 1969, when Yale finished 5th. On top of that, the last time Harvard cracked the top 10 itself was in 1963 when they finished 10th.

It gets a little dicier when trying to figure out the last time a Mid-Major program made it into the top 10. We’re defining Mid-Major as any team not in a Power 5 conference (Big Ten, SEC, ACC, Big 12, Pac-12). SMU finished 9th in 1998, but it’s sort of an open question as to whether they should have been considered a Mid-Major at that time or not. So, to be as specific as possible: SMU was the last team to crack the top 10 whose Football team wasn’t competing in a conference considered to be a ‘major Division I conference’, and that happened in 1998.

Harvard finished 18th with 58 points at last year’s NCAAs. They moved up 10 places and 74 points this year, thanks in large part to junior Dean Farris and high scoring relays. Farris racked up 53 points for the Crimson after winning the 100 back and 10 free, and clocking a 5th place finish in the 50 free. Farris also played a pivotal role in the Harvard relays, two of which finished in the top 8, and two made the top 16. Brennan Novak, a senior, also tallied up 11 points for Harvard after finishing 8th in the 500 free.

Looking to the future, there’s a lot to be excited about after this team’s historic finish this year. Namely, the Crimson will return nearly everything next year. Seniors Novak, Logan Houck, and Grant Goddard will have graduated. In terms of scoring swims, that means Novak’s 11 individual points will not be returning. Novak was also part of the 7th place 800 free relay, where he provided Harvard’s 2nd fastest split. Goddard only swam on the 200 free relay, which came in 8th. He anchored in 19.45 in prelims and 19.95 in finals.

Other members of Harvard’s NCAA team:

Definitely the surprise of the meet as far as team performances go. No scholarships and a pretty tough admissions standard. Wow.

Yes, pretty tough because to get into Harvard for a non-revenue generating sports, you still have to have a high SAT/ACT score (we are talking around 1450/33) and a good GPA. The fact that you have a group of swimmers who possess such academic stats making it into the A finals of both individual and relay events at the NCAA speaks volumes about them and their program. Harvard swimmers should be commended for being model student athletes – knowing how to balance academics and sports and excelling in both.

Not true on those academic standards – and I used to coach at an Ivy League school so that’s not conjecture.

I agree. The academic standards are high, but not that high.

What’s their best finish ever?
When did the last win?

That was not the author’s point. He was speaking about the Ivy League as a whole in terms of most recent top ten finishes.

How does this article get posted without Kevin Tyrrell’s name being mentioned. That is insane. Congrats Harvard. Congrats Kevin. It isn’t easy to lead Ivy athletes to this level of performance on the national stage. Winger would be proud.

Samantha Pitter, Associate Head Coach of the Harvard men’s team, should also get a mention. She plays a key role in recruiting and, if I recall correctly, developing the sprint program (among other things I am sure).