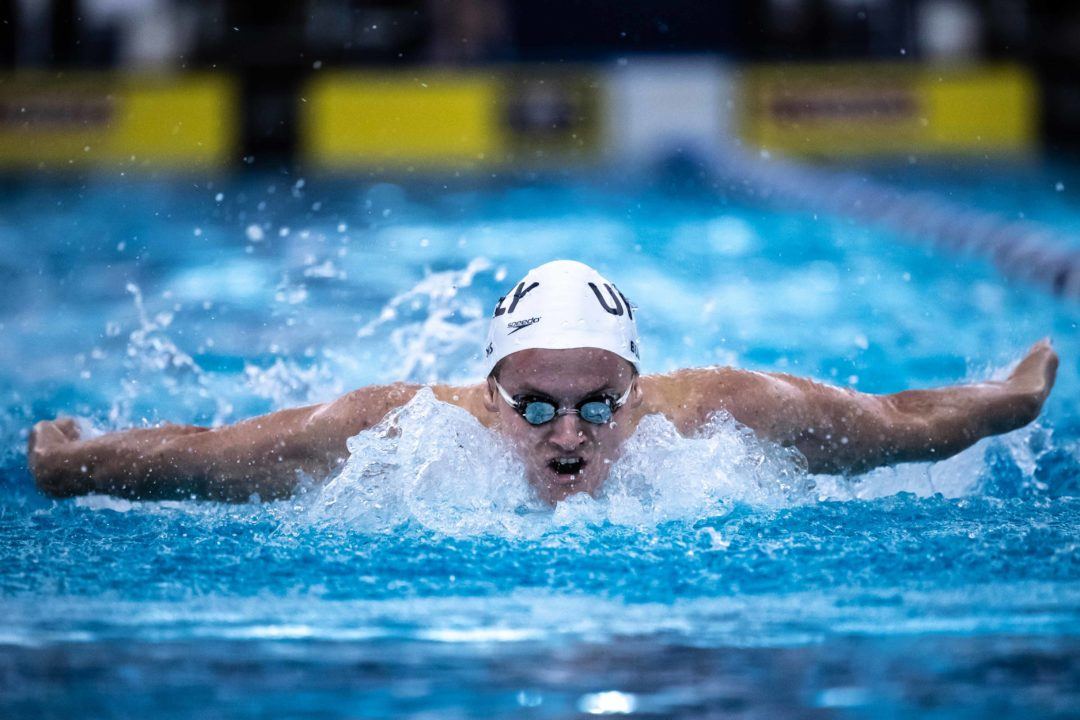 For the second time in his career, Brendan Burns achieved a perfect YMCA National meet winning all 4 of his individual events. Stock photo via Mike Lewis/Ola Vista Photography

For the second time in his Upper Main Line YMCA career, Brendan Burns achieved a perfect YMCA National meet winning all 4 of his individual events. The IU-commit sealed the deal tonight with his fourth win and YMCA national record in the 200 fly, defending his title and crushing his own mark with a 1:42.22. His winning time is a personal best by one one-hundredth and remains the 11th-fastest performer in the 17-18 age group. His 200 fly win is now joined by his previous record-breaking wins in the 100 fly, 200 free, and 200 IM.

Burns was not the only swimmer to score a perfect meet. 17-year-old Paige Hetrick of Bradford YMCA sealed her own 4-for-4 meet with her win in the 100 free (49.13). The future Louisville Cardinal also won the 200 free and swept the backstroke events during the 5-day meet.

Another highlight of the meet came from Somerset Hills YMCA’s Jack Alexy in the 100 free. Not only did Alexy defend his 2018 title, but his winning time of 43.07 took down Olympic gold medalist Ryan Held’s 2014 mark of 43.31. Alexy’s personal best swim is now the 4th-fastest time in the 15-16 age group, putting himself ahead of Caeleb Dressel and just four-tenths off Ryan Hoffer’s NAG of 42.67.

The Somerset Hills YMCA men dominated the team scores. On the women’s side, Sarasota YMCA took the win with help from Emma Weyant‘s 4-for-4 performance. Once again taking the top spot in the combined team scores also were the Sarasota YMCA Sharks.

Brendan, a total god at swimming. The upmost dominant man.

Also, your post with the team scores does not include the miles. No fault to you on that one. They still aren’t uploaded to meet mobile by the Y folks.