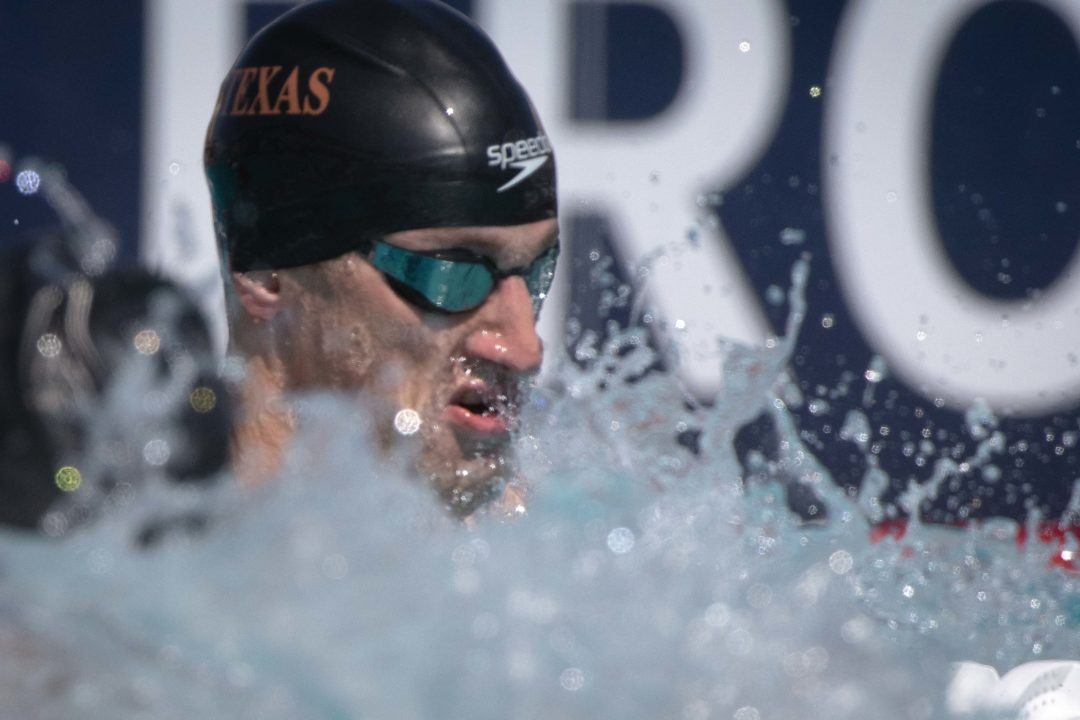 By finishing second in tonight’s 200 breast final behind Josh Prenot, Andrew Wilson is virtually assured of making for the Pan Pacs team (there are some highly unlikely scenarios where he misses the team, but it’s a near certainty he’s in).  Wilson competed for D3 powerhouse Emory in college and is perhaps the first NCAA D3 swimmer ever to qualify to represent the United States at a top level international meet. We’re not aware of any previous qualifiers.

Wilson’s rise through his career has been dramatic. When he graduated high school, D3 seemed like the correct place for him. His best time in the 100 breast was a 59- not good enough to catch the attention of major D1 programs. From there he only improved. His freshman year he dropped to 55.44. His sophomore year he went 54.36. His junior year he exploded to 51.72.

After that season he took a year off of college to train with Texas for the 2016 Olympics. Wilson ended up finishing 5th and 4th in the 100 and 200 breast, an incredible feat considering where he was only a few years previously, but he was off the Olympic team.

He returned to Emory for his senior year where he reset his own D3 record with a 50.94.

After graduation he returned to Texas to train. He was again close to the 2017 world championship team, finishing one place off the team in the 50 breast with a 2nd place finish. He was 2 places away in the 100 and 200 where he again was 4th.

Tonight he touched out training partner Will Licon by .01 for 2nd with a time of  2:08.71. 3rd may have been good enough to make the team, but a second place finish is almost certain to make the team.

D3 has had other top level swimmers in the past that have come close to qualifying but getting over the hump onto the team has been elusive. Jim Born was close in the 1980’s. Hannah Saiz was 8th in the 200 fly at 2016 trials. Rob Peel was 6th in the 50 at 1996 trials at age 30. Lindsay Payne was 7th in the 100 breast in 2008. Wyatt Ubelacker, Marie Marsman, Bob Hauck, and plenty of other D3 legends I’m certainly forgetting placed respectably at trials.

I believe Jim Born (Kenyon College) did represent the USA in the late 80s at an international meet, not sure if it was one of the meets that counts.

IIRC, Born was on a USA dual meet roster for a SCM meet held at Hamilton College. His 4 x 50 FrR team set a “world best” time, since scm times weren’t considered a world record category then.

I think Wilson pretty clearly pushes Born to #2. Pan Am games in 87 was the second tier meet. The top guys, Biondi Jager, ect. were at Pan Pacs.
Born at his peak was a guy with a chance to sneak onto a relay. Wilson has legit individual medal chances. Plus, he might be better in the 100 than the 200.

in 1975 Marcia Morey from D3 School, Millikin University in Decatur IL (she swam on their men’s team in college) set the American Records in the 100 and 200 yard Breaststroke at US Short Course Nationals, then represented the USA in the 1976 Olympics in both those races.

What a gift, retired coach.

This is why the comment section is awesome. Always someone that knows the most obscure stuff. I’m not sure if we can call her a D3 swimmer though. Women’s NCAA swimming (and therefore D3) didn’t exist until 1982.