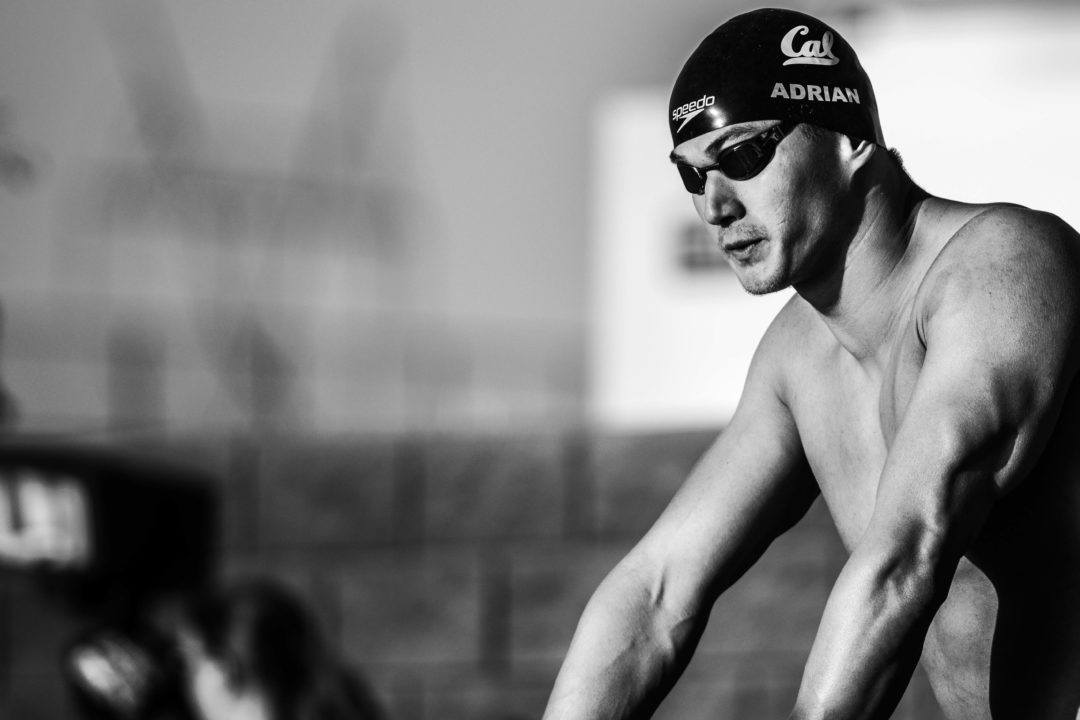 Nathan Adrian has never lost a 100 free at a Pro Swim Series meet since it was even called that. Yeah. But will it last? Archive photo via Mike Lewis/Ola Vista Photography

Below are five interesting stories/predictions/expectations for this weekend’s meet. Note that these storylines are not meant to be exhaustive– there are plenty of great races and stories to follow this week; these are just a few of the most compelling.

Nathan Adrian has never lost a 100 free at a Pro Swim Series meet since it was even called that. Yeah. But will it last?

Caeleb Dressel is the name everyone jumps to immediately. While he’ll be racing, he’s only been 49.5 this year, and he’s not known for throwing down huge swims in-season– meanwhile, Adrian is absolutely known for cruise-controlling 48’s whenever he feels like it. We can never count out Dressel, though.

Additionally, Brazilian Marcelo Chierighini is entered in the 100 free. Recall that he swam a blistering 46.85 split in the 4×100 free relay at the 2017 World Championships. He’s been 48-point three times this year, though they were at the Maria Lenk Trophy, where he was likely rested.

It’s not looking like Adrian will have too much to worry about, but with guys like Dressel and Chierighini in the meet, you can never be so sure.

Regan Smith has been on the radar for awhile now, which is impressive considering she’s just 16 years old. However, the versatile rising star is not the only Minnesota native who continues to track high improvement curves.

15-year-old Isabelle Stadden, also from the Twin City area, is making a name for herself, too. She has danced with the 1:00 barrier in the 100m back all spring, and at the Mel Zajac Jr. meet, she clocked a lifetime best 2:08.37 in the 200 back to raise some eyebrows.

Smith will race the 100 and 200 back, among other events, while Stadden’s lineup includes all three backstroke races.

It wasn’t more than three weeks ago that Katie Ledecky smashed her own 1500 free world record at the Indy stop of the PSS, effectively hushing growing concerns about her stagnating as an athlete. She won’t be racing that event this week, sticking with the 100/200/400/800 free. She also won’t swim either IM race, two events she’s competed in relatively often of late.

Ledecky didn’t go best times in any of her other free races in Indy, but she was still very fast for in-season. Without the grueling 400 IM and 1500 free, she may find enough strength to challenge some of her bests in other events.

Fear those from the North. World record holder Kylie Masse is set to race on American soil, along with a couple other high-profile Canadian athletes. Masse, who holds the LCM world record in the 100 backstroke after an electric gold-winning performance at the 2017 World Championships last summer, will race all three backstrokes in Santa Clara. A fierce competitor, Masse has the world’s #1 times in the 100 back (58.54) and 200 back (2:05.98) this season, and the largely-American field (Olivia Smoliga, Smith, and Stadden, included) in California will be eager to try to track her down.

Meanwhile, Olympic gold medalist Penny Oleksiak continues her tour with the Gator Swim Club, entered in the 50/100/200 free and fly. The 200 fly is a newer race for her, but she’s already shown promise in it, including a big 2:09.96 PR from last weekend’s Mel Zajac Jr. meet. Oleksiak will also get to race Simone Manuel in the 100 free — the two tied for Olympic gold in that very same event in 2016.

It’s never a sure thing that great yards swimmers will be able to translate that prowess into the big pool. This past NCAA season, Stanford’s Ella Eastin, Wisconsin’s Beata Nelson, and Cal’s Andrew Seliskar all had breakthrough years. Now, they’ll look to lay the groundwork for improvements in long course.

Eastin, of course, had a triumphant return after a crushing DQ at Nationals last summer, absolutely wrecking the U.S. Open, NCAA, and American records in the 400 IM at NCAAs. She also wiped Elaine Breeden’s name out of the record books with a 1:49 200 fly at Pac-12s. Nelson struggled her freshman year despite being an incredibly highly-touted recruit in high school, but nonetheless became just the fourth woman under 50 seconds in the 100 back this year, and hit best times in nearly every event. Seliskar is incredibly versatile and switched from the 200 fly to the 200 breast this season, which resulted in a lifetime best 1:50.42 runner-up performance at NCAAs. He also lit it up with a PR in the 200 free this year — 1:31.28.

Eastin, Nelson, and Seliskar will be ones to watch at this meet and on through this summer as they’ll attempt to extend their success into the long course pool.

But Ryan Lochte great comback back of top3?

Still far enough however. Remember that US nationals are one month later than last year. But I expect Dressel to be slightly rested unlike Atlanta or Mel Zajac where it was probably just travel rest. Maybe he can beat Adrian but I doubt it.

I’ll only be surprised if she breaks the 200 world record. And even that case the word surprise may not really apply.

I know what you mean. The word “surprise” was used because to swim fast times in this event at this meet may not be in her plans. In no way I wanted to say that swimming under 1:54.8 is a surprise result for Katie Ledecky. Please, don’t be too picky on me.

Not trying to be picky, ёжик. Just stating that nothing she does can be truly surprising after her 15:20 at the last meet.

I haven’t seen my name written this way for very long time. Thank you. 😀
p.s. I wrote this response using different alphabet, but Swimswam blocked it not knowing what to expect from me.

Meanwhile, Michael will be in his backyard, swimming 25s…..

He is swimming in Europe. And technically speaking he is in a pool located in his back yard

Michael will be in Europe, swimming in a series of meets with bigger prize pools and with a field that’s just as stacked…..

And we’re going to ignore the potential Kalisz, Lochte, Dressel competition in the mens 200 IM not to mention the other big names in the event? I hope Dressel doesn’t scratch it in finals to focus on the 100 free. I want to see those 3 go at it in Finals. Should be a pre-curses of things to come at Nationals.

Stadden is from the Twin *Cities* area, not City, doncha know. That’s what we call it up nort’ here, yah. How bout dem Twins?

After a night on the town in Rio.

I’ve been so impressed by Oleksiak’s results with the Gators so far. Really inspiring that she is able and willing to jump into 200 flies and the workload that UF is known for. Not many young sprinters with the career she’s had are willing to experiment and think outside the box like this. I hope she stays down there, but either way I am stoked on her right now.