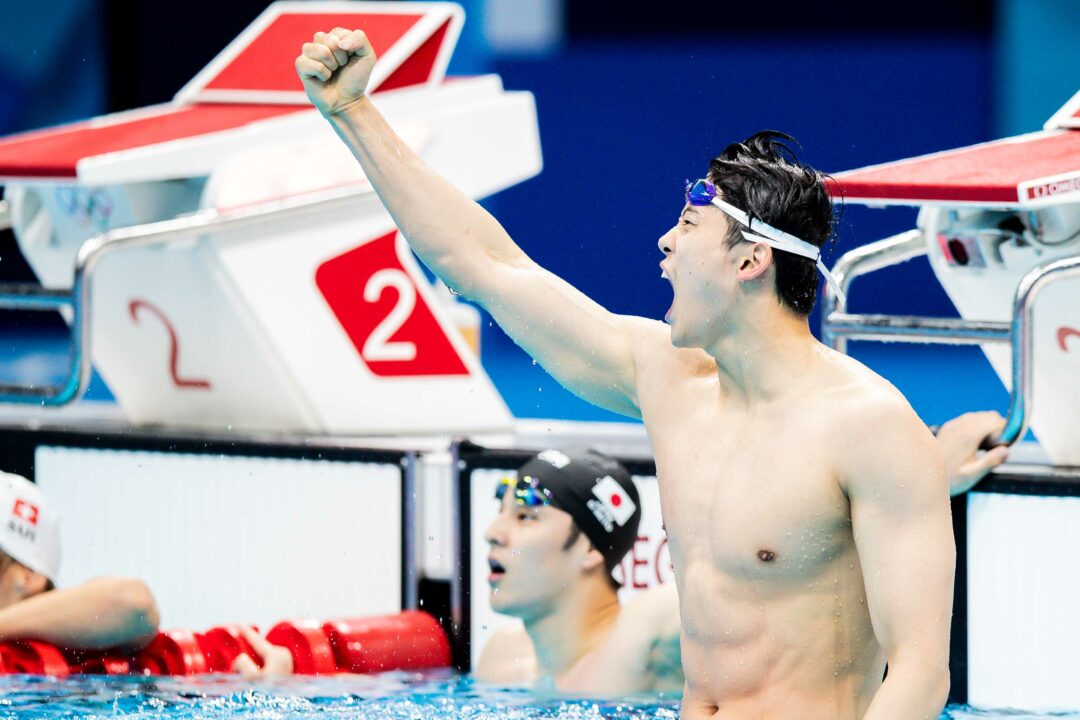 China's Wang Shun got the job done last summer at the Olympics, now it's a question of whether or not he can back that up with a World Championship title. Archive photo via Jack Spitser/Spitser Photography

Last year, most of the excitement surrounding the men’s 200 IM had to do with Michael Andrew’s race strategy. It was hard to resist the drama of him bursting out of the gates on the first three legs only to be reeled in by multiple people on the final 50.

Andrew isn’t racing the 200 IM this year, choosing to focus on other events, but that doesn’t mean there’s no reason to get excited. All the Tokyo Olympic medalists will be in the race, as will a cast full of storylines. Veterans looking for redemption, Newcomers looking to establish themselves, and you need two hands to count the number of national record holders in the field. It should be a good one.

Wang Shun unleashed a 1:55.00 in Tokyo to win the gold medal. In doing so, he set an Asian Record and became the third-fastest performer of all time, trailing only Ryan Lochte and Michael Phelps. He’s been a consistent medal threat since 2015, winning bronze at three straight major meets in Kazan (’15), Rio (’16) and Budapest (’17). This season, he has the third-fastest time in the world at 1:56.33, and is in prime position to follow up his Olympic gold with his first LC World Championship title.

It’s Duncan Scott who holds this year’s top time, having clocked 1:56.08 at British Trials—a meet where he also dropped a monster PB in the 400 IM. Scott is incredibly versatile and has also been constantly improving. This event is a good example of that—in Tokyo, he upgraded from fifth place at the 2019 Worlds to an Olympic silver medal. That swim was a lifetime best of 1:55.28, taking even more time off the National Record he set of 1:55.90 at the British Olympic Trials. This year, he’ll be looking for gold.

However, Scott recently revealed on Instagram that he’s come down with COVID-19 just three weeks out from the meet, which is something to keep in mind.

Switzerland’s Jeremy Desplanches took bronze at the Olympics last summer, and like Wang, has been consistently in the medal hunt for years. The 27-year-old Swiss athlete won gold at the 2018 European Championships and silver at the 2019 Worlds, having also made the final the last time the Worlds were held in Budapest in 2017. Desplanches has only been 1:59.23 this season, and given that there are six in this field who have already been 1:56, he’ll need to quickly find his form and be much closer to his 1:56.17 best to retain a step on the podium.

After a disappointing home Olympic Games where he only made one final, Japanese star Daiya Seto bounced back at Short Course Worlds in December, winning gold in the 200 and 400 IM. Seto also spent this year sampling different training environments in the U.S.

The 28-year-old has proven himself time and time again in the medley events on the global stage, and comes in as the defending world champion after winning gold three years ago in Gwangju. At Japanese Trials, he opted for this event over the 200 fly, showing that his focus is here, and put up a time of 1:57.09. Look for him to make a serious run at becoming a back-to-back World Champion in this event—something he’s already done in the 400 IM in 2013 and 2015.

While it’s the 400 IM where he won his Olympic gold last year, it’s hard to count Chase Kalisz out when it comes to the IMs. He finished 12th in Tokyo and didn’t make the final, so he’ll be looking to bounce back from that here. His lifetime best is 1:55.40, which makes him the ninth-fastest performer of all time. In Greensboro, he won in a time of 1:56.21, setting himself up nicely not only to make the final, but to be in the hunt for a medal.

Like Kalisz, the 400 IM is New Zealand’s Lewis Clareburt’s better race. Nevertheless, he made last year’s Olympic final in both events. His best in the 200 is 1:57.27. Clareburt recently tested positive for COVID-19 and had to quarantine, which meant going a week without getting in the water. While he said he’s still confident in his ability to swim fast in Budapest, it’s an unwelcome hurdle on his path back to the final, especially in a field this deep.

Carson Foster finally got over the hump and qualified for his first senior international team this year. At U.S Trials, the 20-year-old won the 400 IM and then finished second to Kalisz in the 200 with a new best time of 1:56.65. One of the keys to his success at the meet was that he didn’t do his big swim in the morning, he executed the build from heats to finals arguably better than he ever has and it paid off.

Now that he’s on the roster and the semi-finals return (there weren’t any in Greensboro), the big question for Foster is whether he can maintain his cool on the big stage or whether he’ll fall back into old habits. The answer to that question determines if he’s in the hunt for a medal, but there’s no denying his ability.

While there weren’t any semis in either race, the rising University of Texas junior did win a pair of individual medals at the 2021 Short Course Worlds, claiming silver in the 200 IM and bronze in the 400 IM, showing he can perform under the lights.

After an incredible NCAA Championships, French native and rising Arizona State sophomore Leon Marchand traveled to the San Antonio Pro Series the following weekend and clocked 1:56.95 to break the French Record by almost a second. That immediately puts him into the medal conversation, in an event he didn’t even advance out of the heats in at last year’s Olympics (placing 18th in 1:58.30).

South African Matt Sates also just dropped a new lifetime best, going 1:57.43 at the Monaco stop of Mare Nostrum. That puts him about three-tenths off South Africa’s national record. So far, Sates has fared well in the transition to the professional lifestyle, continuing to be on fire through the next two stops of Mare Nostrum. However, he’s already said that his focus meet will be Commonwealth Games, not Worlds, which makes it hard to predict his form. It’s easy to see him dropping another best time, but harder to put him down for a medal.

After having surgery in the fall, Finlay Knox kicked off his Canadian Trials with a 1:57.50, breaking his own Canadian record by more than half a second. With his improved backstroke, the 21-year-old has set himself up to be a factor in the final.

In the Olympic prelims, Norwegian Tomoe Hvas swam a lifetime best of 1:57.64 before fading to 16th and missing the final. Had he repeated that time in the semis, he would have found himself in a swim-off with the now-retired legend Laszlo Cseh for a spot in the final. Despite illness, Hvas had a successful season in short course meters, and he’s now looking for a breakthrough in the big pool.

Hugo Gonzalez had a strong senior season at Cal, highlighted by an NCAA and U.S. Open Record of 3:32.88 in the 400-yard IM. At his second Olympics, he placed sixth in the 100 back, and was also 11th in this event. Last May, Gonzalez won the 200 IM at the European Championships and is now looking to assert himself as a medal contender in Budapest. His best time is a 1:56.31, which certainly makes him a threat.

Continuing the spring’s hottest trend of setting a national record, Jaouad Syoud broke the Algerian record in 1:58.12 at French Championships. He’ll likely need another drop to make the final, but don’t be surprised to see him in the fight for a lane.

Australia’s Brendon Smith will also be looking for a lane in the final. He was two one-hundredths off the best he set in Tokyo during the recently-concluded Australian Trials, going 1:58.59. That time is faster than where he was during the Olympic Trials last year, which bodes well for him. He’ll be more of a factor in the 400, but with a drop, he could find himself in this final, too.

As mentioned in other previews, China has not released an official roster for Worlds yet. The leaked version does list Qin Haiyang, but Chinese media has also reported that swimmers who train in Shanghai, like Qin, will be subject to the city’s COVID-19 travel restrictions, which may mean that they won’t be able to compete. Qin holds a lifetime best of 1:57.06 and has been 1:58.63 this season. If he is in Budapest, he’s capable of sneaking into the final, especially if his breaststroke is on point.

DARK HORSE: Tom Dean (GBR) – Is Tom Dean really going to swim this? He already has a busy schedule with individuals and relays, and all three rounds of this event coincide with the 100 free. But if he’s in, he could be a major upset to some of the usual IMers. Dean finished second to Scott at British Trials in a lifetime best 1:57.18, good for eighth-fastest in the world so far this season.

Kalisz is definitely focusing on the 200 im now that he knows Carson is taking the mantle in the 400. I am keeping my eye out for Kalisz who might sneak onto the podium.

I was all in on Dunks but now I’m concerned. I’m still going to stick with my initial thought. I have faith!

Would be nice to see Brendon Smith make the final too but he obviously doesn’t have medal potential.

Rowdy can make that happen

And what about the official junior world record holder?
Not even a word about Hubert Kós.

Lochte’s record will survive for a thousand years