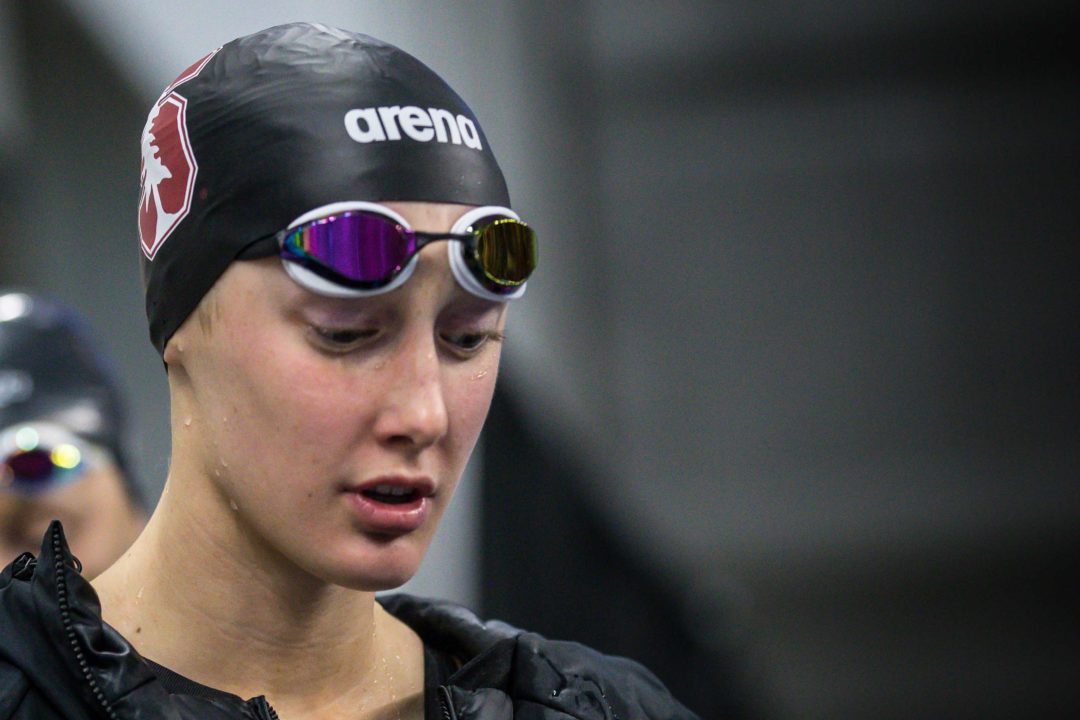 Stanford's Taylor Ruck had the fastest split of the night in the 800 freestyle relay with a 1:40.49. That split helped earned the Cardinal win. Archive photo via Jack Spitser/Spitser Photography

Night one kicked off in Atlanta for Women’s NCAAs. Tonight only featured relays so it is time to do some relay analysis for each team as decisions had to be made. The relays had 45 minutes in-between, and some athletes were used on both relays.

Virginia has already taken a lead of 16 points over Texas. Their big decision of the night was using Emma Weyant on the 800 freestyle relay. Weyant was not on the relay that won the ACC Championships. She swam the anchor leg tonight replacing Ella Bathurst. The decision was not super impactful as Weyant split a 1:44.80 tonight, and Bathurst split a 1:44.72 at ACCs.

Stanford decided to use Regan Smith on both the 200 medley and 800 freestyle relays. Smith led off in a 24.31 on the 200 medley relay and split a 1:43.35 on the 800 freestyle. Both were just off of her splits from Pac-12s a few weekends ago. Something to note is that Stanford was the seventh seed in the 200 medley relay but ended up finishing 10th. Smith was third heading into the wall but came out seventh and ended up splitting a 24.31, over a second slower than what she led off in at Pac-12s. Using Smith on both relays tonight means that they most likely will leave her off of the 200 freestyle as each athlete is limited to only four out of the five relays.

Texas used Evie Pfeifer on the 800 freestyle relay tonight after not being on the school’s fastest time this season prior to tonight. Tonight, Pfeiffer split a 1:44.29, right around her split of 1:44.00 from last year’s NCAAs.

Unlike last year where Cal left Isabel Ivey off of the 800 freestyle relay, the Golden Bears did opt to use her this year. Ivey came up with a huge split leading off the relay in a 1:41.35, the fastest leadoff split of the field and the second fastest split overall. That time was over two seconds faster than she led off the relay in at Pac-12s.

Like Stanford, Tennessee also opted to use a swimmer on both relays tonight. Freshman Ellen Walshe swam the butterfly leg of the 11th place 200 medley relay as well as the second leg of the 800 freestyle relay. This was the same as she swam at SECs where she was left off of the 200 freestyle relay. The same most likely will happen here as she is limited to four relays.

Wisconsin did the opposite of Tennessee and Stanford as they took Mackenzie McConagha off both relays after swimming both at B1Gs. McConagha did lead off the 200 medley relay tonight. The change did look as if it paid off though as McConagha split a 1:46.43 at B1Gs and Alana Palmer who swam in her place tonight split a 1:45.91.

The top five teams in the 200 medley relay all held their seeds. The biggest mover was Louisville which was seeded 17th but ended up eighth.

The 800 freestyle relay was a much different top eight. Stanford and Virginia both held their top two seeds whereas Georgia (14th), Louisville (12th), and Florida (15th) moved up to finish in the top eight.

Zoie Hartmann anchored in the fastest split of the event to help Georgia earn a fifth place finish.

Virginia had a long finish on everything. That’s my analysis. And it was so blatant and strange from early in the first relay that I knew darn well it would carry over all night. That had to be coaching emphasis as opposed to all of these individual swimmers deciding upon the same thing.

Tennessee added a couple of tenths. Just like UVA and 10-15 other schools. Ellen Walsh swam a best time it looks like for them in addition

Using Smith turned out to be a “mistake” as they won by five seconds. Maybe I am being too critical but they would have won with almost anyone else taking her place

Mistake? What, are they going to put her in the 200 free relay?

Given her day 4 double and her empty schedule today, maybe that makes sense. Though I think it’s more likely they just leave her off 4 relays

It was wise to let her swim fast to reaffirm some confidence so she could get past the fluky flip turn thing. Now she doesn’t have to sit all day with that stewing in the back of her mind. They wouldn’t want to use her in the 200 free relay anyway.

Rowdy said during the 800 free relay that Regan missed her turn…if you go back and watch it, she definitely did…not too far away, but too close, and when she pushed off, she appeared to push off at the top of the touch pad (almost missing it really) and pushed downward…it was a very strange looking turn that easily added some time to her swim. Maybe a shaky 1st race.

Hoos keeping pace with their seed in these relays! love it