Brooke Forde Will Retire After NCAAs, Join the Peace Corps 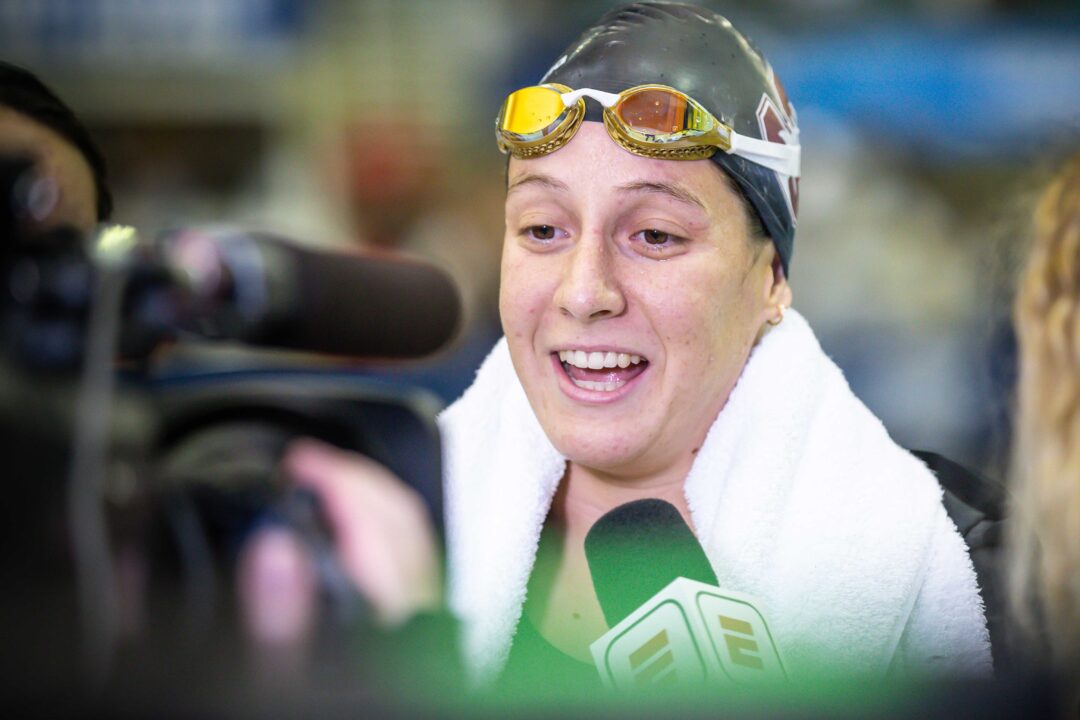 Stanford 5th year Brooke Forde is swimming the last meet of her career this week. She will join the Peace Corps in rural Peru in September. Archive photo via Jack Spitser/Spitser Photography

Forde says that this meet will be her final swim meet as an elite competitor. In September, she will move to Peru to work with the Peace Corps as a public health officer in rural Peru.

Forde completed her undergraduate degree in Human Biology at Stanford and is working on a Master of Science in Epidemiology, which is a one year program.

Forde was also a member of the U.S. Olympic Team in 2021. She finished 6th in the 200 free at the U.S. Olympic Trials, earning her a prelims swim in Tokyo on the American 800 meter free relay. She anchored the prelims relay in a 1:57.00 split; the U.S. finals relay finished 2nd, which earned Forde and her teammates a silver medal.

Forde is scheduled to swim the 500 free, 400 IM, and 200 breast individually this week for Stanford. The Cardinal are projected to finish in 2nd place as a team at this week’s meet, based on seedings.

The Peace Corps is a volunteer program run by the U.S. government that sends typically-young volunteers around the world to work in developing countries in a number of fields, including community health, business, technology, education, and agriculture. The program was established by President John F. Kennedy in 1961.

Volunteers commit to three months of training followed by a two year assignment.

A true champion, in and out of the pool. Way to go Brooke! How lucky is the Peace Corps to be getting you. Congrats on a great career!

So much respect Brooke!

Wicked smart. World class athlete. And also selfless and service oriented? Such an admirable human being. Wishing you the best Brooke =)

Really cool that she gets to apply her MPH right out of the box like that. And, what’s with her dad’s family obsession with adding “E’s” to perfectly good names?

Beautiful soul! We are inspired by your heart of gold, Brooke!

Brooke swam for Stanford for 5 years, so to finish her career with her team and all her friends will be a memorable way to end her long career.

I always thought she had good stroke technique and swam with a lot of finesse.

She and Alex Walsh will have quite a race in the 400 IM.

I don’t wanna make this sound bad because it isn’t but Honestly after her post about the California fires I kinda thought that her time in the sport was coming to an end at least that’s what I got from that post mostly because I genuinely thought she wants to pursue a path along the lines of helping people which actually sounds very rewarding but congrats on an amazing swim career Brooke and have fun with the Peace Corps.

Also good luck with the rest of NCAAs

I really like her response to the question regarding Lia Thomas. She was really smart with not going into it at the moment with the media, and I thought that was a really good move on her part. So happy for Brooke, such an inspiration and can’t wait to see her bright future:) -Melanie and Rick