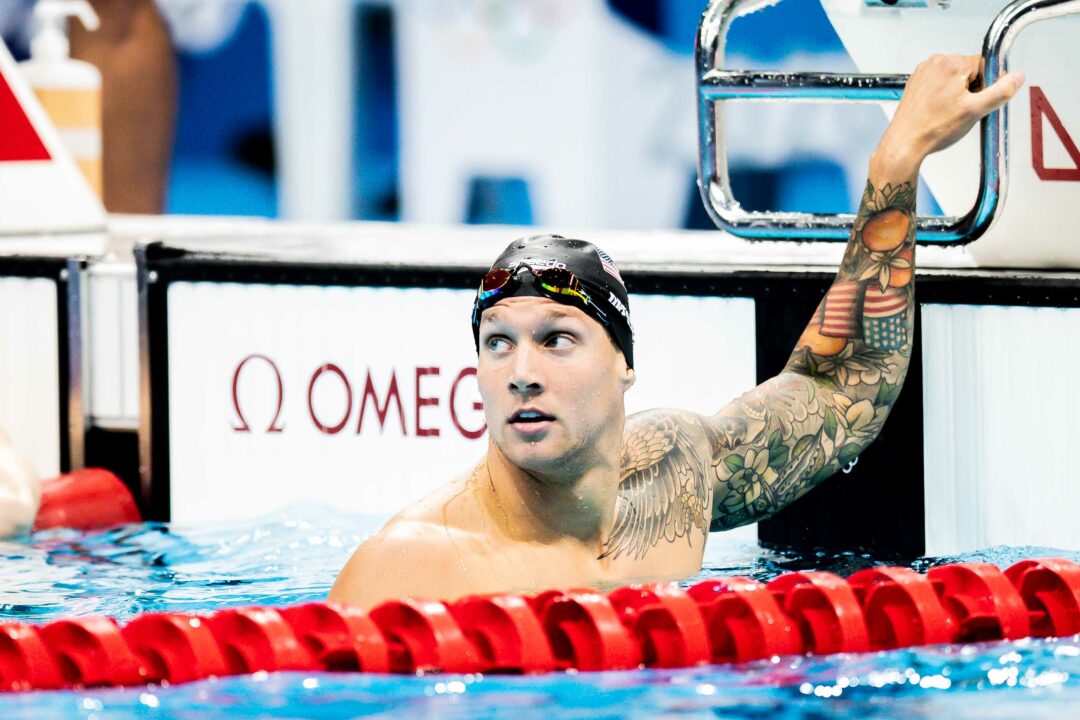 Day 1 of the U.S World Trials in Greensboro is finally here, and the first prelims session will feature Caeleb Dressel in the 100 free. Current photo via Jack Spitser/Spitser Photography

After waiting an extra year for Olympic Trials, it seems like we’ve blinked and now it’s suddenly the first day of U.S World Trials. The quest for Budapest roster spots begins this morning. We’ll see the preliminary heats of the women’s and men’s 200 butterfly and 100 freestyle, as well as the women’s 800 free and men’s 1500 free.

Many big names will be in the water this morning, including a majority of the Florida pro group; Caeleb Dressel, Katie Ledecky, Bobby Finke, and Natalie Hinds are all slated for their first swims.

This morning will also be an interesting first indicator of how college swimmers have managed the quick turnaround from yards to meters, particularly the men, whose NCAA meet wrapped up just over a month ago.

In the first race of the meet, we’ll see Olympic silver and bronze medalists Regan Smith and Hali Flickinger looking to set themselves up to defend their international team roster spots.

They’ll be chased by a slew of NCAA stars like Lindsay Looney, and Olivia Carter. Watch for the junior teamers too, including Olympic Trials third place finisher Charlotte Hook. Justina Kozan and Tess Howley will be vying for a lane in the final as well.

On the men’s side, Trenton Julian sits at the top of the psych sheet. He’s followed by Olympian Zach Harting, Luca Urlando, and Nicolas Albiero. At Olympic Trials, they all finished within 1.29 seconds of each other, so prelims this morning will be the setup for potentially another dogfight in finals. In particular, keep your eye on Luca Urlando, who is coming off a monster NCAA meet.

We’ll also get a look at Olympian Chase Kalisz in this event. After rumors that he was focusing on shorter events, Kalisz is indeed entered in the 400 IM, but we should still see whether there’s any truth to these rumors here.

Even without Simone Manuel, there’s an incredibly deep field looking to punch their ticket to Budapest in the women’s 100 free. Our poll asking readers who would win the event had an almost even split between Claire Curzan, Kate Douglass, Gretchen Walsh, and Abbey Weitzel, with Curzan taking 26.6% of the vote for a slight win.

But the depth doesn’t end there, as Tokyo Olympians Torri Huske, Olivia Smoliga, Natalie Hinds, and Erika Brown will be in the mix as well. And lurking further down the psych sheet are Katharine Berkoff and Mallory Comerford. There’s only eight lanes in the final, so whichever way you slice it, there’s going to be at least one big name on the outside looking in after this morning.

There’s a deep field on the men’s side as well, all chasing Caeleb Dressel. Pros like Ryan Held, Coleman Stewart, and Justin Ress will looking to bounce back after disappointing Trials, while Zach Apple will look to hold on to his #2 spot from the psych sheet.

Other Olympians in the field are Brooks Curry, Drew Kibler, and Kieran Smith. Curry won both the 50 and 100 at NCAAs, while Kibler took the 200. Smith will be more of a favorite in the 200 and 400 later on in the meet, but don’t discount him here. Other swimmers coming off strong NCAA seasons are Adam Chaney and Jack Alexy.

The Olympic duo Katie-squared—Katie Ledecky and Katie Grimes—will begin to defend their roster spots this morning as well. In addition to Grimes, there will be three other Sandpipers in the water: Bella Sims, Claire Weinstein, and Paige Kuwata. Sims made the Olympic team in the 200 free last summer, but she shouldn’t be counted out here.

Leah Smith is another veteran who will be looking to strike back after a disappointing Trials, so keep an eye on her as well.

Behind them, there are many young swimmers who will be trying to claim their spot in finals.

In the final event of the morning, we’ll see Bobby Finke in action. The Olympic gold medalist won the mile at NCAAs, despite what he said was “one of the sloppiest miles he’s ever swum.” Look for him to clean things up here.

Behind him, the race is on, lead by a pack of NCAA swimmers including Finke’s Florida teammate Tyler Watson. OSU’s Charlie Clark, Texas’s David Johnston, and the NC State’s James Plage will also be fighting for a spot.

Let us know in the comments which event you’re most excited about this morning, or which swimmers you’ve circled on your heat sheet.