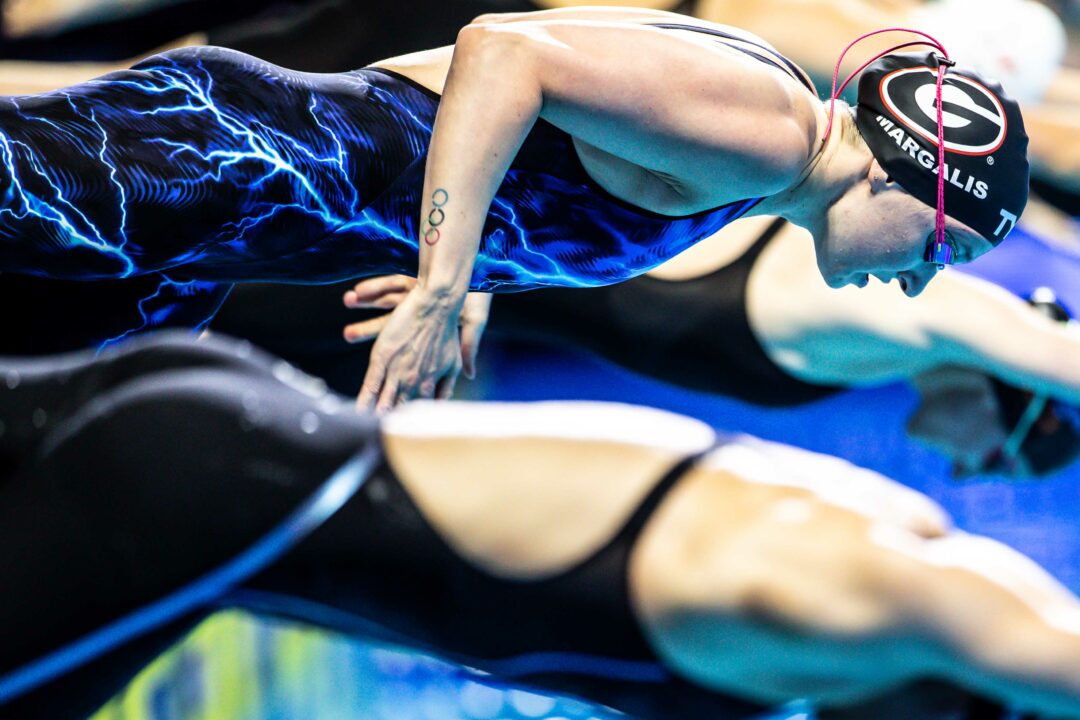 There are four women we can expect to see in the 400 IM later this month whose best times sit between a 4:32.53 and a 4:33.96. Current photo via Jack Spitser/Spitser Photography

There hasn’t been a mainstay 400 IMer for the USA on the women’s side in recent years. Since 2016 Olympians Elizabeth Beisel and Maya DiRado retired, there’s been a revolving door of representatives in the event at major international events.

In 2017, Elizabeth Beisel raced the event at her last World Championships. The other entrant for USA was Olympic freestyler Leah Smith, who raced to silver in the 400 free, bronze in the 800 free, and 6th place in both the 400 IM and 200 free.

The next year, a trio of women was selected to compete for the USA at Pan Pacs in the form of Melanie Margalis, Brooke Forde, and Ally McHugh. One year later, Forde and McHugh returned to the scene to race the 400 IM at World Championships and placed 9th and 6th, respectively.

By 2021, all four of those women (Smith, Margalis, Forde, and McHugh) were on the hunt for a 400 IM Olympic debut. The four of them made it into the final at Trials but none of them landed in the top 2. In fact, that quartet of women who had held down the event from 2017 to 2019 finished in 3rd-6th place.

The women who nabbed a spot on the team were Emma Weyant and 2016 200 butterfly Olympic finalist Hali Flickinger. Weyant won Trials with a 4:33.81 and Flickinger came second in a 4:33.96. They went on to pick up Olympic hardware later that summer as Weyant hit a 4:32.76 for silver and Flickinger a 4:34.90 for the bronze.

We can expect to see Weyant and Flickinger back in action at Trials this year, along with Melanie Margalis and Leah Smith. Ally McHugh hasn’t raced since Trials in 2021 and Brooke Forde recently retired from the sport.

It’s a tough call between those four as Flickinger, Smith, and Margalis all have years of experience and international racing experience and Weyant has quickly proven herself to be a tough competitor and was able to out-swim the world’s best in Tokyo.

Coming off her Olympic outing, Weyant began her freshman year at Virginia. Despite being the Olympic silver medalist, Weyant actually had a better performance in the 500 freestyle at NCAAs in 2022 when she took silver with a 4:34.99. In the 400 IM, however, Weyant missed the podium with a 4:03.17.

She has also swum the long course event twice since the Games but was a bit off her times from last year with a 4:42.01 and 4:43.68. She certainly has the potential to get into the top 2 here, but Weyant hasn’t emerged this season as a hands-down favorite.

Weyant’s Olympic partner, on the other hand, Hali Flickinger, is among the most consistent forces in both butterfly and IM and has put up the fastest time in the nation this season. She swam a 4:36.46 a few weeks ago to get within a few seconds of her Olympic swim. She usually pulls through when it comes down to it at looks like the one to beat later this month.

In terms of the #2 performer in Greensboro, my money is on Melanie Margalis. Margalis had a disappointing 3rd place finish in Omaha and missed a spot on the Olympic team by just 0.12 seconds. In the wake of that meet, Margalis kept going strong. She didn’t race in the 2021 ISL season – indicating a focus on training once she got back in the pool in the fall.

That didn’t mean she gave up on a chance to race short course on the international stage, however, as she accepted a spot on the US World Short Course Championships team in December 2021. There, she got onto the podium in the 400 IM with a 4:26.63. Margalis hasn’t raced the event long course yet this season, but she’s one of the fastest Americans in history with a 4:32.53, and if she gets near that this month she could wind up winning the event and getting to Budapest thing summer.

Leah Smith is a solid contender as well, having also bounced back well after missing the Tokyo squad. She’s the #2 performer in the country this season with a 4:38.89 and her best time sits at a 4:33.86. The 4 women we’ve mentioned so far have all been 4:33 or faster in their careers and they are certainly the top 4 favorites in this event.

The junior to watch for in this event is 400 freestyle Olympian Katie Grimes who is certainly better known for her freestyle, but has IM abilities as well. Grimes swam a new PB in December 2021 when she hit a 4:41.37. The 16-year-old will need to be quite a bit faster than that in order to clinch a top 2 finish but is no stranger to significant drops when it comes down to it.

Also right on the verge of cracking 4:40 is Olympic Trials finalist Justina Kozan, who finished 8th overall last year. She posted a 4:42.72 in the final but has a best time of 4:40.57 from June of last year. The junior national teamer is slightly better known for her 200 IM, having won gold in the event at 2019 World Juniors but is an outside shot for the team in the 400 IM here.

Another name to keep in mind is University of Virginia superstar Alex Walsh, who won the NCAA title in this event last month in the fifth-fastest performance in history.

Whether or not Walsh will race this event at Trials is the real question. She didn’t contest it at the Olympic Trials last summer, but she also didn’t race it at the NCAA Championships that year. She’s certainly geared her focus towards the two medley events in the short course pool, and while she showed how versatile she is during the NCAA season in free and fly, the 400 IM would probably be her #2 long course event in terms of competitiveness for a World Championship berth.

The 20-year-old Olympic silver medalist owns a best time of 4:42.14, set in January 2020, and hasn’t raced it since. Her PB in yards has dropped over 10 seconds in that time. And given how unstoppable she’s been of late, it’s hard to imagine Walsh finishing outside of the top two if she does swim this. That’s the question.

Rounding out the group of women who are just on the cusp and could force their way into the final are the likes of 16-year-old Leah Hayes, Julia Podkoscielny of Pine Crest Swimming.

I’d like to see new faces represent USA in that event.
Like Katie Grimes and Alex Walsh. Both girls have the potential in my opinion to really compete for gold in 2024 if they train for it.
Emma Weyant is a big question. Like for so many high school stars before her who go to college and change their coaches the first year can be rough as freshman and often the performances in long course move backwards. Let’s see what happens with her.

I can see Weyant possibly going a 4:04 400 Free, challenging Leah Smith, Bella Sims, and Katie Grimes for seconds. But you are right, her 400 IM at the moment doesnt seem to be her best event. It may be beneficial if Alex Walsh starts doing the 400 more that she does the 200/500/1650!

Must we get tickets before the event starts or can we get them on-sight?

We don’t know if she’s still swimming. If I’m not mistaken, she hasn’t raced since trials.

I think she raced at a non-sanctioned club meet in November, but you are right. It’s gonna be interesting with the lineups. McLaughlin and Manuel too… As well as Becca Mann and Kendyl Stewart.

None of them will show up! You need move on if they have moved on! L

wow what a surprise this race will be!

looking forward to cheering on (potentially) THREE ‘Hoos in L. Smith, E. Weyant, and A. Walsh!!!