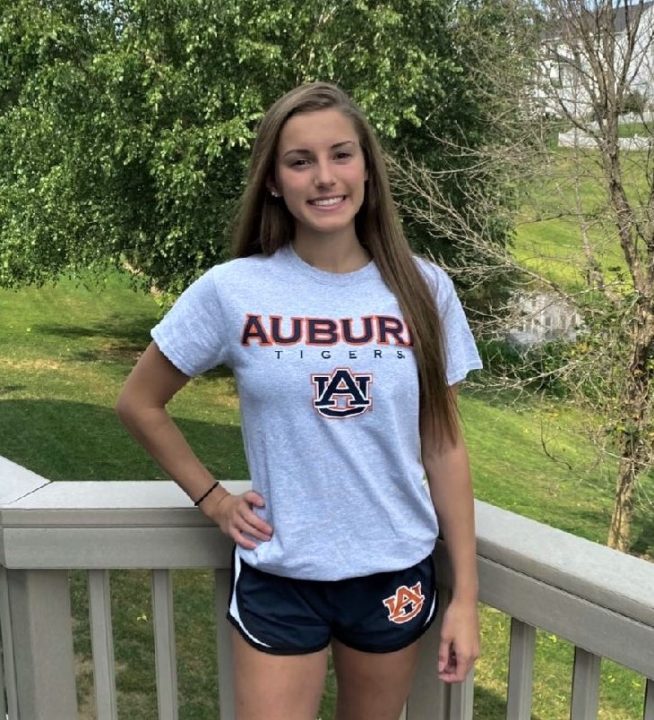 Auburn commit Carly Sebring (above) finished her high school career with a bang, while the Poolesville boys won their 10th-straight state title.

This was the first state title meet since 2020 after COVID-19 safety protocols shut down the 2021 championships.

After finishing second to Poolesville at each of the last two Maryland small school championships, Damascus won its first state title in girls’ swimming at the meet.

While Damascus didn’t win many races, they were led by star senior Carly Sebring, who is committed to swim at Auburn in the fall.

Sebring will graduate with five individual state titles, out of a maximum of six, but what is perhaps most impressive is that those state titles came in four different events. As a freshman, she won the 200 IM and 100 free, and as a sophomore, she won the 50 free and 100 free.

Her time in the 100 fly also broke her classmate Kaitlyn Hunter’s 3A/2A/1A State Record of 57.02 and just missed the overall MPSSAA record by .07 seconds. Hunter, also a senior, swam the 50 and 100 freestyle instead this season.

Sebring was a touch faster in both races (54.49 fly, 54.38 back) two weeks earlier at the METRO Championships, a high school championship meet for teams in the DC Metro area. She won both races there.

This was a senior-heavy Damascus team that was lined up to make its big run at a state title this year, and they were successful in that endeavor. Out of 177 individual points scored by the Hornets, 142 of them (more than 80%) were scored by seniors.

At the other end of the spectrum was a very young, but very fast, team from La Plata High School that placed 3rd. Sophomore Addy Donnick, getting her first crack at the MPSSAA championship meet, won both the 100 free (50.95) and 100 backstroke (53.68), both in big lifetime bests. Her previous fastest time in the 100 backstroke, from December, was 56.48.

Her 100 backstroke time crushed both the 3A/2A/1A Meet Record and the 3A/4A record as well. Donnick just-missed another championship record, finishing .15 seconds behind Sebring’s class mark in the 100 free.

She also swam the leadoff backstroke leg on La Plata’s winning 200 medley relay (along with freshman Jadyn Woolsey, senior Emma French, and junior Kaeleigh Cupples), and the anchor leg on the team’s winning 200 free relay (with the same foursome).

By contrast to Damascus, only 10 of La Plata’s 113 individual points were scored by seniors, which is less than 9%.

The team runners-up from Poolesville were led by junior Anna Li. She dominated the 200 IM in 2:06.84, winning by four-and-a-half seconds. She also finished 3rd in the 100 fly.

Poolesville won the last 6 state titles in MPSSAA smaller schools classification. They still showed they’re one of the best programs in the state by finishing 2nd in the 200 and 400 free relays, as well as 3rd in the 400 medley relay. They fall in between La Plata and Damascus in terms of age: they are not as young as La Plata, but return more firepower than Damascus, and will be the favorites to land atop the podium at next year’s state meet.

The boys from Poolesville High School completed a decade of dominance, winning their 10th straight Maryland State Championship trophy, dating back to 2012.

It was a dominant performance for the Poolesville boys, which included a clean-sweep of the relays. The 200 medley and 400 free relays also broke MPSSAA 3A/2A/1A State Records.

Part of the school’s individual effort was 71 points from seniors Konnor Chen and Maxwell Chen, who are not brothers.

The dominant individual force of the meet was Rockville High School junior Toby Barnett. He successfully defended his title in the 200 IM with a 1:47.15 – almost ten seconds better than the field. At the time, that cut a second-and-a-half off his personal best in the event, though he went 1:46 at NCSAs a month later.

Barnett is verbally committed to the Indiana Hoosiers for the fall of 2023.

He wasn’t the only winner for the runners-up from Rockville High School. His senior teammate Theodore Ament won the 200 free in 1:42.52 and the 500 free in 4:35.62. In both cases, he held off a 2-3 finish from Poolesville High swimmers. In the 500, that included a .23 second margin of victory over Poolesville senior Borjigin, a WashU commit.

There were three double winners on the day individually in the boys’ pool. The other was Taj Benton from Baltimore City College, which in spite of its name, is a high school (and one of the oldest active public high schools in the United States).

Thanks for sharing and great article, but the title is misleading…only Donnick and Barnett were double individual winners. Donnick was a quad winner if you want to count the relays. Don’t think anyone else did that?

The Chens😂 they brothas in heart