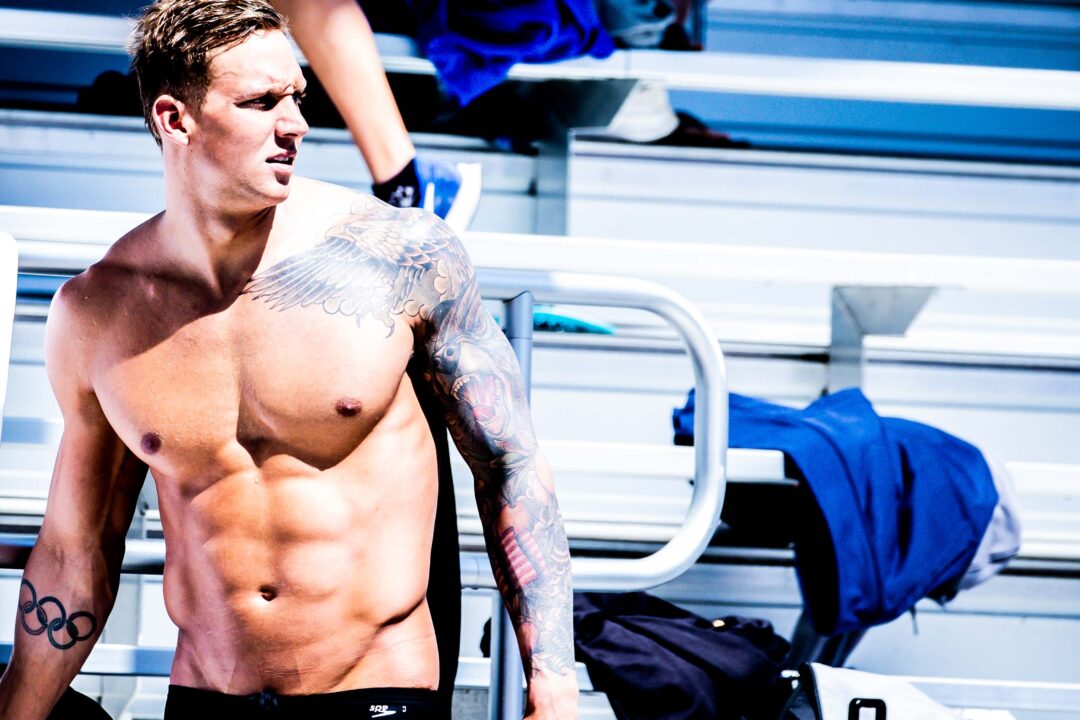 No one is expected to touch Caeleb Dressel in the men's 100 free, as the 25-year-old comes in as the reigning Olympic and two-time world champion. Archive photo via Jack Spitser/Spitser Photography

The men’s 100 freestyle is the second event on the opening day of the 2022 U.S. International Team Trials, an unfamiliar spot for the marquee event that usually falls in the middle of the program at major championship meets (though it’s commonly held this spot at U.S. trials meets in the past).

Behind Caeleb Dressel, who is the favorite to win both here and at the World Championships, the race for second (and the relay spots) is heating up.

There’s a mix of experienced athletes who have made international teams before, as well as some who are looking to play spoiler and make their first. Let’s take a look at who could be on the 4×100 relay in Budapest.

Not much needs to be said about Caeleb Dressel. He’s the Olympic gold medalist and two-time defending World Champion in the event. He’s the only man to break 47 seconds in a textile suit. He was 49.54 at the Westmont Pro Series and was happy with how he executed his swim, commenting that “you don’t always have to be swimming fast to be in a good spot.”

Brooks Curry followed up his Olympic berth with a strong NCAA season, winning national titles in lifetime best marks in both the 50 and 100-yard free. He hasn’t clocked a long course swim this season, but based on his SCY swims, there’s no reason to expect he won’t be ready in Greensboro.

The last member of the Tokyo 4×100 free relay we’ll see at Trials is Bowe Becker. (Blake Pieroni announced that he was planning to have knee surgery in March and will miss World Trials.) This season, Becker’s best is a 50.26 from Westmont. He swam his lifetime best of 48.22 at Trials last year and will need to get closer to it to make the team.

A 2021 Olympian and newly crowned National Champion in the SCY 200 free, Drew Kibler is also a threat to make the Worlds team in the 100 free. He dropped the 500 free at NCAAs for the 50 this year, indicating that he’s focusing more on the sprints. It paid off in yards, as he went lifetime bests in all three of his individual events at NCAAs. In long course, he was 49.46 in San Antonio, and his best sits at 48.72 from Olympic Trials.

Despite finishing sixth at Trials, Ryan Held was left off the Tokyo Olympic team due to roster limitations. He’ll look to fight back from that disappointment in Greensboro and make another Worlds team. This season, his best is a 49.40 from Westmont.

The other two men in the Olympic Trials final were Brett Pinfold and Coleman Stewart. Pinfold came out of retirement in 2020 and swam a lifetime best 48.87, so it will be interesting to see what he can do now with another 10 months of training. In San Antonio, he was 49.85.

Stewart also swam at the San Antonio Pro Series, where he was further back with a 50.06. Expect him to be closer to his 48.45 best in Greensboro.

Stewart’s former teammate Justin Ress could also be in the mix in the final. He’s moved to train with Jeff Julian in the Mission Viejo pro group and in his own words is swimming at World Trials “with the goal of having fun and not putting any pressure on himself.” He holds the fastest time in the world this year in the 50 back, so he could be more of a factor there, but it’s still worth keeping an eye on him.

Texas-based Maxime Rooney’s lifetime best stands at 47.61 from the 2019 Nationals. At Trials, he finished 11th in the semi-finals in 48.86, and his best this season sits at 49.37. If he hits his taper, he’s certainly capable of making the top six in the final.

Ryan Hoffer spent his season in the ISL, swimming short course meters. He has yet to break through in the big pool the way he has in short course, but he’s still someone to have on your radar. His long course best is a 49.48 from the 2019 Nationals.

In addition to Curry and Kibler, plenty of other swimmers will be dealing with the quick turnaround between NCAAs and World Trials.

Aside from them, Cal’s Jack Alexy seems to be the only man who swam the 100 free at NCAAs who has also been under the FINA ‘A’ standard of 48.77. Judging from their shortcourse times, plenty of them are likely due for a long course drop but they will have to manage the double taper well and drop best times to have their best chance at making the Worlds team.

Florida sophomore Adam Chaney is the closest to the cut, with his lifetime best 48.81 from Trials last year where he finished ninth in the semi-finals. This season, he swam 50.89 at the U.S. Open but was unlikely rested or shaved.

Sophomores Matt King and Matt Brownstead have traded the UVA 100-yard free record multiple times this season. At the end of NCAAs, Brownstead held it with a 41.22. He’s had a strong season with the Cavs and is one of the swimmers who could have a big drop in Greensboro. His best long course swim is a 49.79 from Trials. Matt King is just behind him with a 49.98 and could also crack his lifetime best.

Other NCAA names to circle are Hunter Armstrong and Grant House, who both competed in the ‘B’ Final at NCAAs this year. Their long course lifetime bests are hundredths apart – 49.31 and 49.24, respectively.

Dark Horse: Daniel Diehl – Last month at the Speedo Spring Sectionals in Buffalo, the 16-year-old Diehl broke Ryan Murphy’s 15-16 NAG record in the 100 back, dropping a 53.59. He also swam 49.71 in the 100 free, a new lifetime best. Given the season he’s having, he’s a serious threat to stage an upset here.

This US Team will have to go some in order to beat GB in the 4×100 Freestyle relay at the Worlds.

Not this &[email protected] again

US depth here deeper than the diving well

This will be sacrilegious (and likely get downvoted into oblivion) but if I was offered a Field vs Dressel bet at even money, I’d take the field here. This event being so early in the meet combined with recent form from him and others makes me think this event is primed for an upset.

Though now that I think about it, there are definitely a handful of guys that could pull off an upset here.

Seems disrespectful to Rooney not to put him on top 8.

Every time they put him top 8 he seems to falter, seems reasonable not disrespectful

Can we get some more women’s previews?