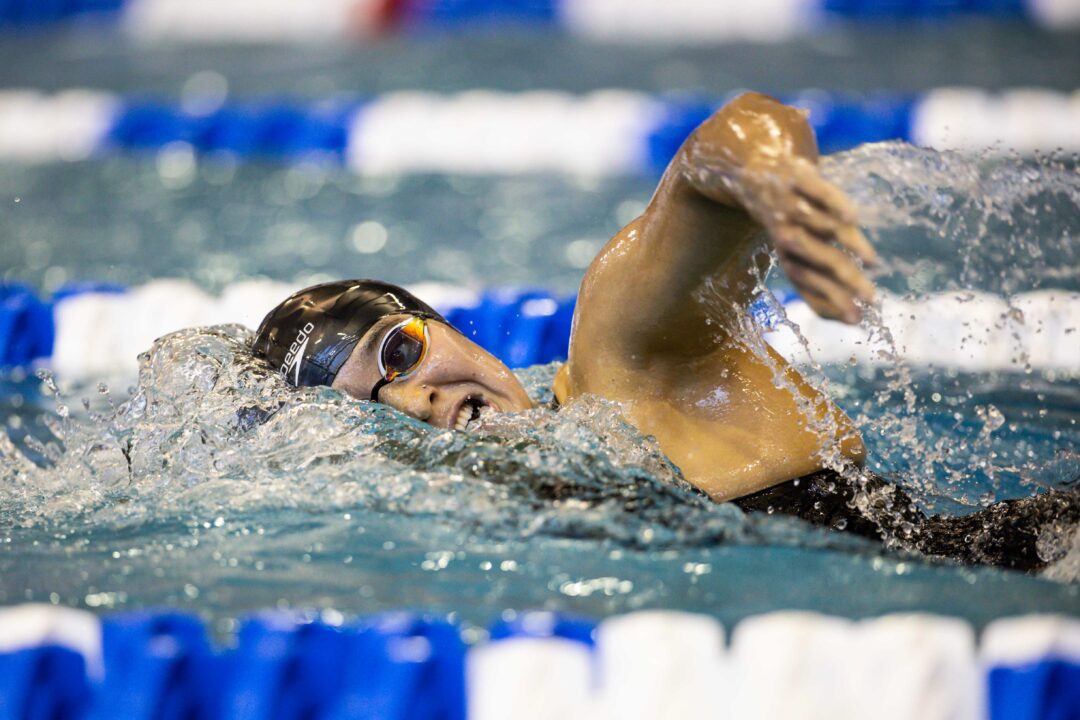 Erica Sullivan of Texas is the #9 seed in the 1650 free and will swim in lane 4 in the last heat before finals. Current photo via Jack Spitser/Spitser Photography

Florida sophomore Elise Bauer improved her time by 8.4 seconds to win heat 2 with 16:06.48 and move ahead of Penn’s Buroker. She came to the wall half a pool length ahead of UNC Wilmington Brooke Knisely (16.13.47).

Heat 3 began with Kaitlynn Sims of Michigan getting out to a big lead at the 250, leading the field by about a body. Her lead gradually shrank, and by the 550, Tennessee freshman Summer Smith had taken over the lead. NC State Brooke Travis was third at that wall, but soon moved into second place behind Smith. Meanwhile, out in lane 1, Florida junior Tylor Mathieu joined Smith and Travis; she flipped in third place at the 900 but took over the lead at the 1050 and never looked back. Mathieu won the heat in 16:03.73, improving her seed time by 9.5 seconds. She took over the lead, moving ahead of Buroker, with a time that would have been seventh in 2021. Behind her, Smith and Travis traded leads several times and their sprint to the finish was thrilling. Travis got the touch, 16:09.64 to 16.09.81, and they moved to fourth and fifth so far.

Penn junior Anna Kalandadze shot out to the early lead in heat 4. She had a big lead at the 400 but by the 450, she began to fade and Virginia junior Madelyn Donohoe took over. Donohoe, who finished 11th in this event last year, continued to build her lead over the field and ended up winning by half a pool length in 15:55.14. That would have been the fifth time a year ago. Indiana freshman Mariah Denigan came in second, while Kentucky sophomore Megan Drumm (16:10.90) finished third.

The final heat was dominated by the Longhorns. Texas freshman Erica Sullivan established a very quick pace early on and had already built up a two-body-length lead at the 250. Her teammate Evie Pfeifer, who was runner-up in this event a year ago, was another body length ahead of the rest of the field. Sullivan and Pfeifer put on a show for the rest of the race, way out in front, chasing the clock so as to make the top-8 after the final heat swims tonight. Sullivan finished with 15:45.94. Pfeifer was second in 15:48.34. Ohio State sophomore Maya Geringer came in third with 15:59.82. She was followed by Ching Hwee Gan of Indiana (16:02.68), Virginia Tech sophomore Chase Travis (16:05.09), Aurora Roghair of Stanford (16:06.04), and Virginia freshman Emma Weyant (16:08.34).

Are these timed finals? Or do they swim again?

UVA has swam well overall at this meet, but once again Weyant is off. Hope they sort out her training and taper in the future.

Also for being better LCM swimmers

(Yes I know Kalisz has the SCY record, but 4:05 in the big pool is next level)

I feel like emma’s 3rd best event at NCAAs is probably the 200 free or 200 IM but those are really tough doubles on day 1 or 2, so she compromises for the mile.

I’m sorry I doubted u Erica Sullivan. Had her 2nd in my pickem 😓

what was her time

I take it back she wasn’t as fast as it looked, she was 15:45.9. Liberty Williams FTW tonight!

Stege, Williams and Nordin 500 wasnt good , i would bet on McKenna

6 minutes into the mile, I think you will be right.

2nd could be right on

Sullivan’s sure jumping on this heat quick!