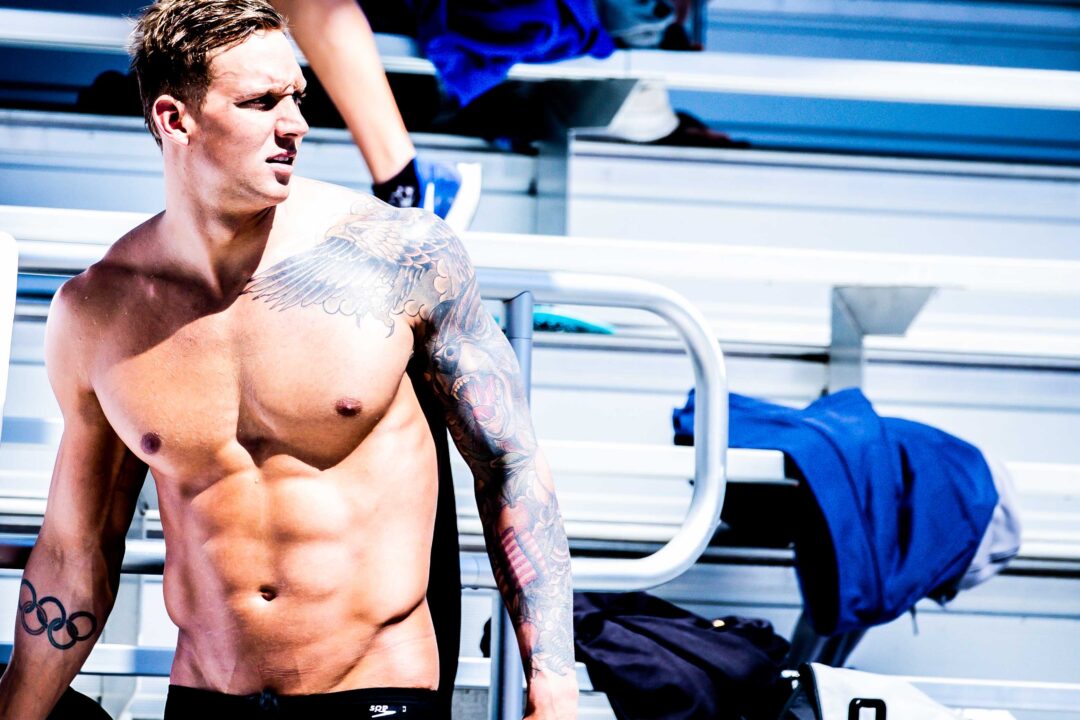 If you're going to bet against Dressel in this race, those are some long odds. The question is: who can get 2nd to Dressel in Omaha? Current photo via Jack Spitser/Spitser Photography

Is this basically the exact same title as the 2016 preview for the men’s 100 fly? Yes. Is it once again that obvious who the top pick in this race should be in 2021? Also yes. Although this time around, our 2016 “wild card” pick has risen to the top spot while a thick crowd of competitors pursues him for the second position on the roster in the men’s 100 butterfly.

Caeleb Dressel is our top pick. He needs no introduction, but we have a word count to hit, so let’s review some of his accomplishments in the 100 fly.

If you’re going to bet against Dressel in this race, those are some long odds, but more power to ya. We probably won’t see a World Record in Omaha, but if Dressel goes within half-a-second of his lifetime best then Michael Phelps‘ 2009 U.S. Open Record of 50.22 is going down. As Dressel went a 50.36 at the 2019 SMOC (when his best time was 49.86) almost exactly 1 month before he broke Phelps’ 2009 World Record, the precedent is there.

So the question is: who can get 2nd to Dressel in Omaha? The United States has two men other than Dressel that have been sub-51 in the 100 fly since 2019, as well as a cluster of men that have been 51.5 or faster.

The Not-So-Obvious Race for 2nd

Most recently, Michael Andrew popped a 50.80 in May at the Indianapolis Pro Swim, lowering the PSS Record. At the same meet, Andrew lowered the U.S. Open Record in the 100 breaststroke to a 58.67, both major improvements for the 22-year-old USRPT devotee. Andrew, our top pick in the 100 breaststroke, will enter U.S. Trials as a top contender in the 100 fly, 100 breast, 50 free, and 200 IM. The finals of the 200 IM and the semifinals of the 100 fly are separated by only the finals of the women’s 100 freestyle. Quick turnarounds have not treated Andrew well in the past, though all he’d need to do is produce the 8th-fastest time on Friday evening in order to get a lane in the 100 fly final Saturday.

At the 2019 U.S. National Championships, Maxime Rooney popped off a blazing fast 50.68 in the prelims of the 100 butterfly. Rooney won the national championship in a 51.09 that evening, adding a bit to his morning swim but over half-a-second ahead of 2nd place. Rooney posted a 52.13 at the TXLA Invite in May, the 3rd-fastest time of his career. While this is a good sign for Rooney, it also means he has only been sub-52 on two occasions, while Andrew, for instance, has produced 13 sub-52 second swims.

2016 Rio Olympian Tom Shields has been sub-52 26 times in his long career, including just recently at the 2021 Atlanta Classic where he produced a 51.55 for 2nd behind Dressel (51.15). Shields’ swim in Atlanta was only 0.52 off his lifetime best from 2015. Shields had a spectacular season with the ISL, swimming some of the fastest times in history in both the 100 and 200 SCM butterfly at the ISL Grand Final in December 2020, including a new American Record in the 200 SCM fly.

2016 Olympian and American Record holder Jack Conger swam the 100 fly at the 2018 Pan Pacific Championships, the 2018 Short Course World Championships, and the 2019 World Championships. Conger has been swimming a steady string of 51s in the 100 LCM fly since 2015 and has a lifetime best of 51.00. Despite having hit a plateau in the event, Conger has high-level racing experience in the race that some of his younger competitors lack, which could give him an edge in the final.

Cal’s Andrew Seliskar has been as fast as 51.34 in the 100 fly, an event that almost seems like a “bonus” for him given his affinity for the 200/400 IM and 200 freestyle. Seven years ago in 2014, Seliskar won the Junior Pacific Championships title in the 200 butterfly in a 1:55.92–a World Junior Record at the time. The 100 fly represents one of Seliskar’s best chances of making the Olympic team in Omaha, though the semifinals of the fly come shortly after the finals of the 200 IM, a race that until 2018 might have been considered his best long course event. Whether Seliskar takes on both the IM and the fly or chooses to focus on one event is a prospect fans can speculate between now and June 18th, though a focus on the 100 fly over the 200 IM seemingly gives him better odds.

Guys Who Could Surprise

Shaine Casas has become a fan-favorite among the SwimSwam readership since his breakout performance at the 2019 U.S. National Championships. Casas is a double-threat in both long course and the short course yards NCAA format, where he won 3 individual titles in 2021. Though Casas has emerged as a backstroke and IM specialist, his origins are in butterfly. In fact, Casas posted a blistering 1:38.69 200 yard butterfly in March, as well as a 44.91 in the 100 fly at the SEC Championships. Casas swam a pair of 51.9s in the 100 LCM fly at the Pro Swim in San Diego in January, and a 51.73 more recently at the Longhorn Elite Invite.

In 2018, Towson University’s Jack Saunderson exploded onto the national scene with a 51.48 in prelims at Summer Nationals, earning the top seed going into finals. Saunderson lowered his time at the 2019 Summer Nationals to a highly-competitive 51.36. Saunderson’s best time in 2021 is a mere 52.96 from the Richmond stop of the Pro Swim Series, though he was a 53.04 before World University Games and U.S. Nationals in 2019, eventually dropping down to his current lifetime best. However, in Omaha, he won’t have the opportunity to swim the race 5 times, instead getting 3 chances at the most.

Luca Urlando is perhaps the best (active) 200 butterflyer in the United States, but he is yet to bring his 100 up to par with the longer race. If Urlando can get under 52 in the 100 fly, he has a great shot at getting a lane in the final. Zach Harting, Nicolas Albiero, and Miles Smachlo are three more 200-meter specialists on the cusp of breaking through in the 100 LCM race, though for the time being they are on the outside looking in for the 100. It’s worth noting that Smachlo has been 51.9 on two occasions, including as recently as March, while Albiero nearly won an NCAA title in the 100 yard version of the race, producing a 44.32 in the process.

Speaking of NCAAs, the 2021 champion in the 100 yard butterfly, Ryan Hoffer, should also remain on our radar as well. At NCAAs, Hoffer swam a 44.25 in prelims and a 44.24 in finals to win the 100 fly, times faster than former World Record Holder Ian Crocker ever mustered in the yards venue of the race. However, Hoffer has yet to translate his yards speed into major success in the 50 meter pool, despite being one of America’s best sprinters in the yards pool since 2015.

Dark Horse Pick: Aidan Hayes. Lifetime/season best: 52.70. Hayes had a spectacular showing at the 2021 Oklahoma High School State Championships, breaking 2016 Olympic gold medalist Joseph Schooling’s National High School Record in the 100 fly, putting up a 45.47 in the yards version of the race. A couple weeks later at the Speedo Sectionals meet in Jenks, OK, Hayes dropped a 52.70 in the 100 LCM fly. Hayes was out quick in 24.47 and back in a respectable 28.23. While it will likely take a low-52 if not a 51-something to make the finals of the 100 fly in Omaha, Hayes could be on the cusp if he can bring his time down a bit more. Given that Hayes also put up a 1:58.03 in the 200 LCM fly at the same competition, it seems likely he will continue improving his back-half speed.

Can the trials be seen on TV?

Unfortunately Camden Murphy won’t be swimming at Trials. Look for him in the ISL where he will be a force. Great range. 50’s, 100’s and 200’s. Fly, free, back and yes breaststroke!

He’s literally had one medal worthy 100 fly. In prelims. 2 years ago. Added time in finals, and now he has to do three rounds. Just don’t think he brings it this time.

In Coleman’s interview with Camden Murphy around NCAAs, Camden said he wasn’t going to Trials. He said he wouldn’t swim at all this summer, he might swim ISL, and wouldn’t commit to the bonus year at UGA.

In my complete 100% not biased at all opinion, Conger will make the team in second place behind Caeleb with 50.6, out-touching third by less than a tenth. In the last 15 meters Jack will rage harder than a post practice Texas Longhorn being told that Taco Joint has run out of chipotle sauce

If he was your boi why not root for him to win?

My money is on Shields for the 2nd spot.

The dude is a racer and at the last couple of meets has looked like he is firing on all cylinders in the 100. If he follows the same kind of drops from 2015 and 2016, I expect him to be somewhere… Read more »

You are correct. The Michael Phelps 2004 Trials triple.

his workload was unreal