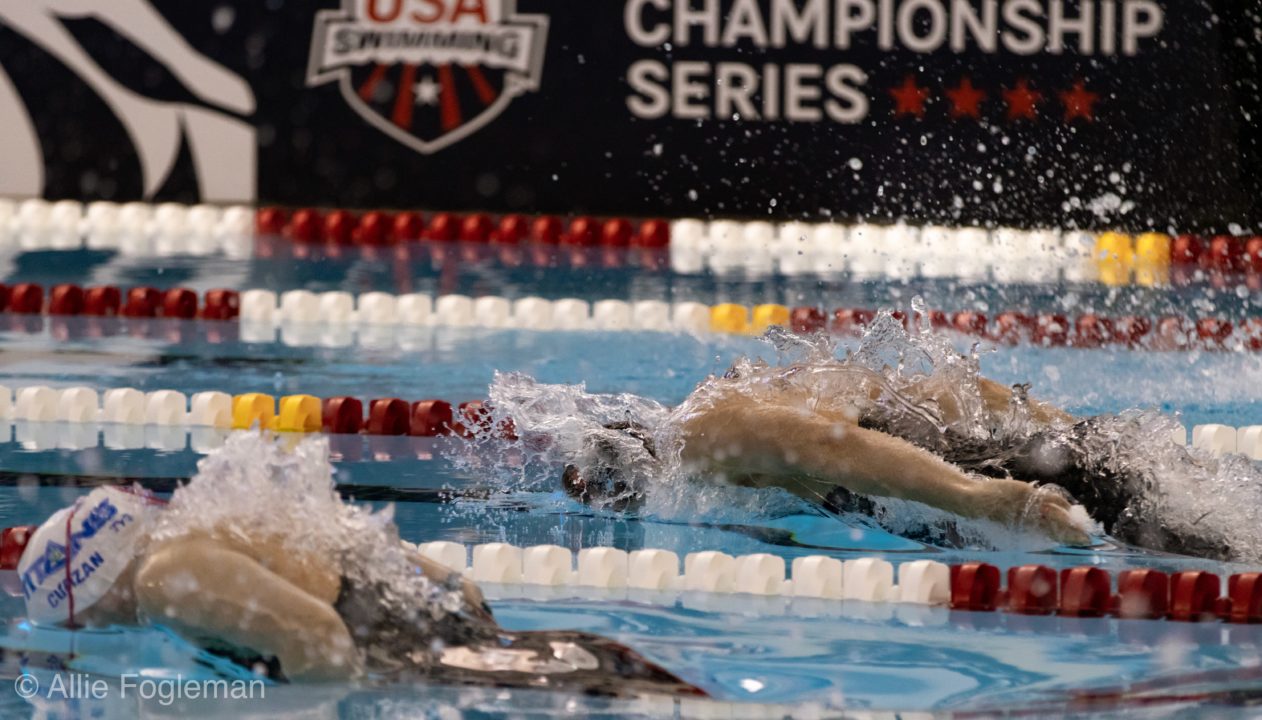 From June 2019 to November 2020, teens Claire Curzan and Torri Huske rocketed to the top of the women's 100 fly US ranks, threatening veteran Kelsi Dahlia. Stock photo via Allison Fogleman

Since the 2016 U.S. Olympic Trials final, Kelsi Dahlia has been at the top of the American women’s 100 fly, winning national titles in 2016, 2017, 2018, and 2019. Entering spring of 2020, Dahlia was projected to easily defend her Trials title. Yet after a global pandemic that literally changed everything, teenagers Claire Curzan and Torri Huske may put Dahlia’s title in jeopardy and threaten her return ticket to the Olympics.

Most butterfliers have a distinct technique that separates themselves from the rest of the field, giving each individual their own set of advantages and disadvantages. For veteran Kelsi Dahlia, she generates mechanical power from all points of her body, most notably from her shoulders and hips that creates an all-around competitive undulation. Teen prodigy Claire Curzan emphasizes distance per stroke also from mechanical power, adapting to her smaller stature in order to produce as much momentum possible. Ironically, both Dahlia and Curzan were spotted training with stationary bungee cords during COVID-19 lockdown.

On a faintly similar note, backstroke world record-holder Regan Smith has a naturally competitive tempo with a low head position that allows her to efficiently propel through the water. In contrast, Katie McLaughlin, Kate Douglass, and Gretchen Walsh all have a more graceful stroke that is more stretched out yet still embodies natural undulation. However, all three swimmers are at a slight speed disadvantage with their natural head positions versus Smith’s that stays align with her spine.

Alongside the aforementioned swimmers, Torri Huske has a very recognizable natural stroke, almost to the caliber of age group great Mary T. Meagher. Both swimmers have a mechanically efficient stroke, yet it is noticeable that their power production is more natural. Huske and Meagher have the natural undulation to that of their competitors. What makes these two stand out is how high they keep their hips that the surface of the water, creating powering through both their dolphin kicks and arm recovery.

We all know Claire Curzan and Torri Huske have the times, but can they race just as well? At their most recent meeting in Apri 2021, Curzan touched out Huske by 0.49s, essentially by a half-second. However, when observing the race video, Huske could have take a longer stroke at the finish like Curzan, yet in the moment chose to take a half-stroke to the wall. From an analytical point-of-view, Huske’s shortened finish did not aid her in contrast to Curzan’s timed lunge.

Meanwhile, Curzan’s last race against Kelsi Dahlia was at the 2019 U.S. Nationals, where she took 5th, leaving a big question mark for what could happen in Omaha. Huske, on a different note, beat Dahlia at the 2019 U.S. Open from the outside lane, practically racing against the clock and staying in her own lane.

An array of possibilities could happen at Trials. Either one of the three swimmers could hit a lifetime best or not come even close. Will their stronest swim come out of prelims, semi-finals or finals? Will all three women swim consistently throughout all three rounds or will someone take an unfortunate, unplanned hit that jeopardizes their Olympic contentions? And how close will the Trials final even be?

Two important variables. 1-are you fully rested to maximize performance at trials or games? 2-everything being equal; who has the better chance of swimming BEYOND expectations?

I will looking for another “shake up” in the $&#*%.
Warriors are forged, not coaxed
Got to have guts to spill guts

“Age group great May T”?” That’s the description for a 20 + year World Record Holder? I don’t care what age she was, she wasn’t an Age Group great after that weekend at Brown Deere.

Thank you Jim. Was liking the article but saying Madam Butterfly was an “Age Group Great”, makes me question everything else he states. Go Kelsi..you show those young whippersnappers.

If I’m Dahlia, I’m training for the 100 free in hopes of getting on that relay.

Curzan will probably finish with a time around 56.08

When the 2021 Olympic Team Trials have concluded, I’m hoping Claire Curzan vaults up to no worse than the #5 all-time performer in the women’s 100 meter butterfly.