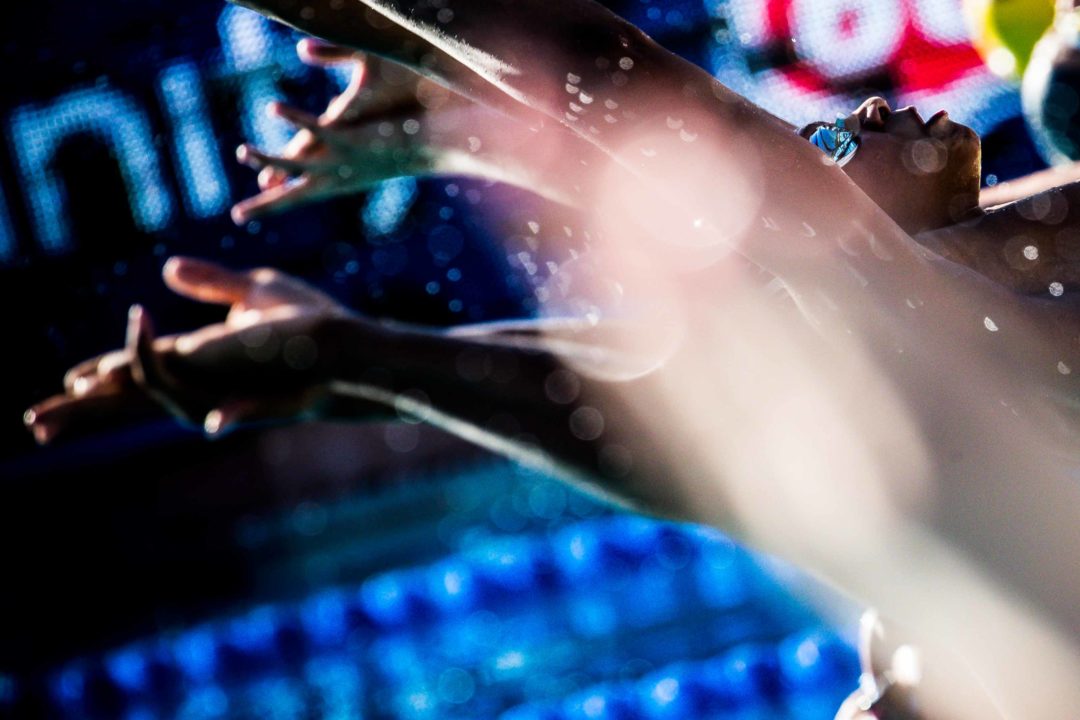 Texas A&M junior Shaine Casas moved to #6 all-time with a 1:38.69 in the 200 fly tonight on the final day of the 2021 American Short Course Championships. Current photo via Jack Spitser/Spitser Photography

As a reminder this meet isn’t an American Championships recognized by any national body, but rather typically serves as a combination club meet and a college last-chance meet, hosted by the University of Texas. This year, the emphasis is definitely on the last-chance side, with only a handful of non-college athletes participating.

This morning, Texas junior Braden Vines continued to put up times that’ll qualify him for the NCAA Championships having not swum that much. Today, he put up the fastest time of the morning in the 200 breast with a 1:53.74, the 2nd-fastest time of his career, and a time that would probably earn him a NCAA invite if he hadn’t already punched his ticket in the IMs the last two days.

Vines opted out of finals, and instead, Texas A&M freshman Alex Sanchez won the 200 breast tonight with a time of 1:53.87. He came into today with a lifetime best of 1:55.78. Better yet, that time should be more than enough to earn Sanchez a NCAA invite.

Fellow Aggie Ethan Gogulski won the 200 back tonight with a time of 1:42.21, just a bit slower than the 1:42.01 he time trialed yesterday. That would appear to leave him a bit outside what’ll probably take to earn a NCAA invite. Yet another Aggie took home a win tonight as Carter Nelson lowered his 100 free lifetime best by over a second today, touching in 43.54 tonight.

While there were only a handful of non-college swimmers today, we did get a pretty big swim from one of them. 30 year-old Bryce Bohman popped a 45.43 in a 100 back time trial. That’s his 3rd-fastest time ever, with his only two faster swims coming at the 2014 NCAA Championships, when he was a senior swimming for West Virginia.

Once again, the Incarnate Word men put up times that would have won events at the CCSA Championships, in which they were the defending champions, but had to miss due to the inclement weather that hit Texas last month. Fernando Ruvalcaba Cruz hit a 1:45.85 tonight that would’ve won the 200 back by 0.06s. Andrija Petkovic‘s 44.59 tonight would’ve won the 100 free by 0.13s, Alvaro Ibarra‘s 1:46.66 in the 200 fly would’ve won by nearly a second, and Panos Vlachogiannakos‘s 15:40.04 in the 1650 was faster than the actual CCSA winning team by nearly eight seconds.

Several more Longhorn swam today, presumably in hope of bettering times for NCAA invites or in order to make the Texas roster, as the Longhorns are once again in the position of having more swimmers qualified for NCAAs than they can take. Andrew Couchon time trialed a 52.98 100 breast, although he’s already been 52.48 and may miss a NCAA invite. Andrew Koustik took 2nd in the 200 fly behind Casas with a 1:42.65, just a bit off of the 1:42.38 he’s already been this season. That time should leave Koustik qualified for NCAAs, but may not enough to make Texas’ rosters.

The Speedo Vanquisher goggles are the source of his speed

Park’s 1:41.1 to win consols in the 200 back is probably good for an NCAA invite, though might be on the bubble for the UT roster…😬

He seems to go a PR every time he races, love it!

I wish Dressel would’ve done something like this between SECs and NCAAs back in 2018. Never seeing a tapered 2 fly or 2 free from him still haunts me

He was never fully tapered at SECs either. I want one meet where we just have Dressel swim every event fully tapered. Just for the sake of the sport

I’m pretty sure dressel was almost fully tapered at SECs. Considering florida does it now I think they did it then too and he hit ridiculous times. There is no way in my mind he had much to taper left.

I’m a fan of Casas for swimming all of these various events, he really embraces the IMer mentality.

Nice. He can probably pick up a shiny 2nd place trophy behind Trenton Julian in 2 weeks.

Because of this I think he would swim the 200 back instead because 200 fly is just too deep right now.

If you lump the 200 free you might as well add: