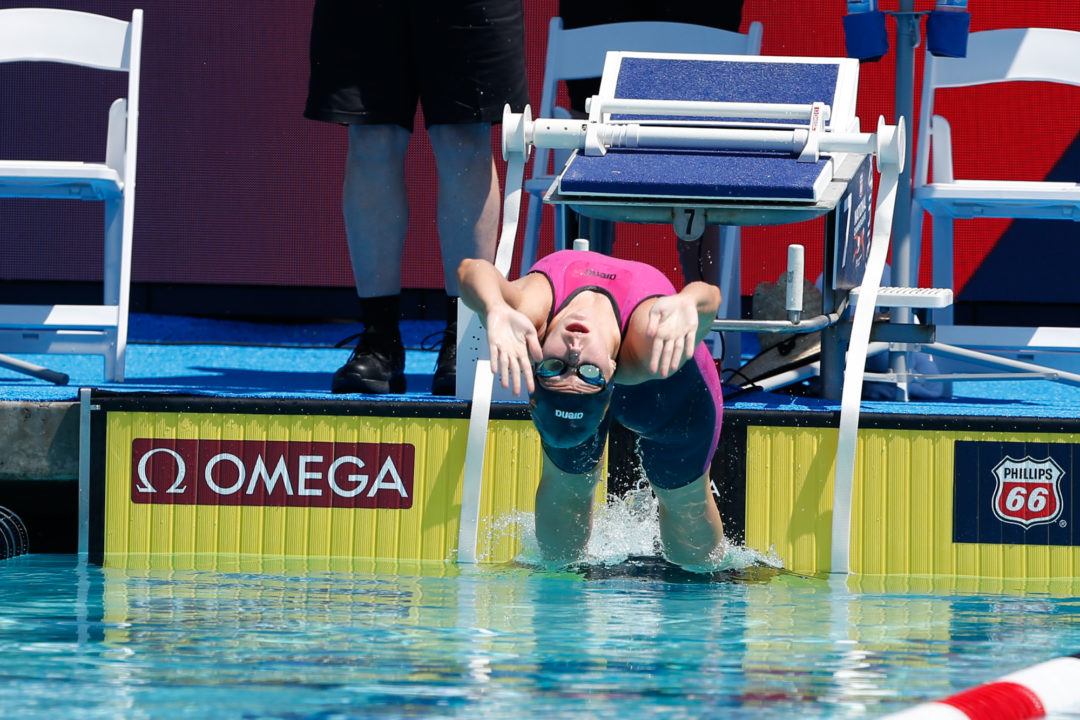 24-year-old Megan Moroney, a former Virginia Cavalier, is the top seed in the women's 200 back. Stock photo via Tim Binning/TheSwimPictures.com

USA Swimming has released psych sheets for Wave I of the U.S. Olympic Swimming Trials, which begin this Friday in Omaha, Nebraska.

YOU CAN SEE THE FULL WAVE I OLYMPIC TRIALS PSYCH SHEETS HERE.

According to USA Swimming, there were 900 swimmers who qualified for the Wave I meet, but didn’t achieve a Wave II cut. Out of those 900, 675 are entered, meaning 225 swimmers declined to enter the meet. Although that number of swimmers declining to enter is high for the Olympic Trials, it’s not entirely surprising, because 650 of the 900 swimmers who were qualified for Wave I only had achieved a cut in one event.

With the psych sheets out, let’s take some time to analyze some of the top races and storylines to watch out for in this first wave of the Trials.

Mykenzie Leehy, who recently completed her senior season with the University of Houston, is the top seed in the women’s 100 free, and the #12 seed in the 50 free. Leehy is fresh off an enormously successful NCAA season, where she made the B final of both the 100 free and 200 free at NCAAs, finishing 12th in the 200 free. As a SCY 100 and 200 freestyle specialist, it comes with little surprise that her strongest LCM event is the 100. Leehy also recently announced she would be following former Houston coach Ryan Wochomurka to Auburn, where he is the new head coach.

Leehy enters the meet with a personal best of 55.68, just 0.13 seconds off the Wave II standard. Additionally, Leehy’s best time is from 2019, and after the success she saw in her SCY racing this season, it’s entirely possible some of that improvement will translate into the LCM 100 free at this meet.

There are a 18 swimmers behind Henderson and Bloebaum who all are entered with 2:00.-something times. Given that, it’s entirely possible that we see a number of sub-2:00 performances at this meet.

Last weekend, at just 12 years old, La Mirada Armada’s Kayla Han picked up her Wave I cut in the women’s 400 IM, swimming a 4:50.70. Han broke 3 11-12 girls National Age Group Records last weekend, including records that were held by Elizabeth Beisel (the 400 IM), Claire Tuggle (the 400 free), and Isabella Rongione (the 800 free). She narrowly missed picking up qualifying times in the 400 free and 800 free as well.

Han turned 13 between last weekend and the start of Wave I, but nonetheless, she achieved her cut at the age of 12, making her the youngest swimmer to qualify for Trials this cycle. Another swimmer to keep an eye on in the women’s 400 IM is Ohio State’s Katie Trace, who has been excellent for the Buckeyes in the SCY version of the 400 IM.

Ellie Marquardt is one of the most interesting swimmers entered in this meet. The Princeton swimmer is only qualified in the women’s 400 freestyle, in which she is the top seed at 4:13.49. The thing that makes Marquardt a swimmer to watch, apart from her being a top seed, is that she has a personal best of 4:36.36 in the SCY 500 freestyle. Her best in the 400 free is from 2019 Summer Nationals, while her best in the 500 is from February 2020. Given her speed in the yards 500 free, and the fact that her 400 free lifetime best in nearly 2 years old, it seems very possible Marquardt could be primed for a big swim in her one and only Trials event.

Marquardt has been right on her personal best this season, having swum a 4:13.74 just a few weeks ago in North Carolina.

Megan Moroney in the Women’s Backstrokes

24-year-old Megan Moroney, a former Virginia Cavalier, is the top seed in the women’s 200 back. Moroney, entered with a 2:13.16, has been well under the Wave II standard in the event. She has a personal best of 2:10.53, which she swam at the 2018 Summer Nationals meet. The thing that’s most interesting about Moroney in the 200 back is that she hasn’t swum the race since 2019. However, given her lifetime best, and that she’s the top seed in Wave I, it appears she’s in excellent position for a top 2 finish, which would advance her to Wave II.

Just saw Reilly Tiltman on the psyche sheet. She could do something great in the backstrokes.
Also, rooting for Marquardt. Anyone who breaks an Aemisegger Princeton record is pretty hot.

Does anyone know if old ASCA Exec, John Leonard will be in his usual seat at Trials behind the lane 4?

Don’t sleep on Tommy Janton’s 200 back

When will the pick em for trials be released?

Guessing after they finish the previews

Im guessing that only a fraction of winners will come back the follow week.

I bet most all will..

Do you guys realize Henry Bethel could be one of the greatest swimmers in wave I swimming the 100 breast. He is just a kid out of high school hopefully going to do very well at these trials

Henry Bethel could never be “just a kid”. He’s been a great advocate for swimming and represents Georgia and the Carpet Capital team incredibly well!